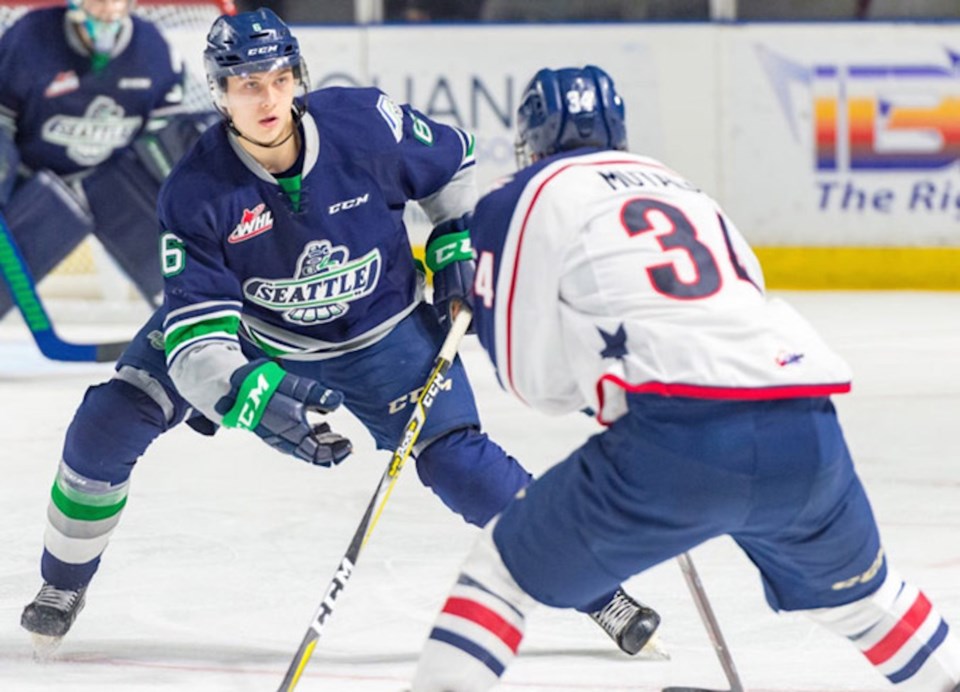 Cochrane defenceman Tyrel Bauer is primed and ready for the upcoming WHL season. Photo courtesy of the Seattle Thunderbirds

During every interview after a tough loss, the coach of that team and its players always have a message along the lines of dealing with and overcoming adversity to become better when that scenario once again becomes relevant down the line. That theme of overcoming adversity has never been truer than it will be with Cochrane-born and Seattle Thunderbirds defenceman Tyrel Bauer, who was one of the last players cut from Team Canada ahead of the 2019 Hlinka-Gretzky Cup tournament that began on Aug. 5 in Breclav, Czech Republic and Piestany, Slovakia.

The Hlinka-Gretzky Cup is a true best-on-best for players who are draft-eligible for the National Hockey League every June. Canada has won gold at the event 22 times in 28 years including a 6-2 win over Sweden in last year's final in Edmonton. Canada has also won two silver medals and one bronze.

"Getting released is never something that you want to happen," Bauer said of not making Team Canada. "There are a lot of emotions after you hear news like that. However, it was an incredible camp with great players and staff and I can't thank Hockey Canada enough for the opportunity. I do feel I gave it my best and showcased my style of game. The feedback I received was very positive and I had a lot of fun ... it was a great mental and physical test against the best in the country and although the news was not what I was hoping for, I got better as a player, as well as a person throughout the process."

Bauer said getting invited to camp was a huge honour for him and hopes to bring that confidence to his team in Seattle for the upcoming year.

"It is a great honour to be given an opportunity to represent Canada on the international stage. Being recognized as one of the top players in your age group is very humbling and something I am quite thankful for," he said.

"The competition in the camp was intense, Canada put together a great group of players and individuals that will do well overseas. Obviously, nobody likes to hear that type of news, but you have to be able to respond. My sights are now set on having a great season and helping my team win a championship."

Even with the disappointment of getting cut, the future is still bright for the recently turned 17-year-old, who suited up for 64 games in the Western Hockey League regular season where he registered two goals and 12 assists for 14 points in those games as a rookie. The young defenceman, who was selected in the second round of the 2017 WHL Bantam Draft by Seattle and signed a Standard Player Agreement with the team on June 14 of last year, spent last season with the Airdrie CFR AAA Bisons where he scored three goals and eight assists for 11 points in 32 games.

During the WHL playoffs, Bauer played in all six games for the T-Birds, registering one assist in Game 2 to go along with two penalty minutes and five shots on goal.

Bauer is heading into his second season with the Thunderbirds, in which he will now be eligible for the upcoming NHL Draft, where the young defenceman is also sure to hear his name called by one of the 31 teams.

"It's going to be a great season. As a team, we want to improve on last season and get even stronger. For me, I just want to make an impact every time I step on the ice and build off a solid rookie campaign last year," Bauer said.

"In terms of the draft, my mindset stays the same. I'm going to do everything I can to help the team and remain consistent. However, as you get more experience and older, you retain a greater role (on the team) which creates more responsibility. You adapt your mindset and grow your game to accommodate the increased pressure."

With this being his second season in major junior, Bauer said he feels more prepared going into the season and is looking to be a leader on a young team that's looking to make their way up the Western Conference standings.

"I definitely feel more prepared in terms of what to expect. It's a long season with many ups and downs, and having that year under my belt certainly gives me confidence in understanding the physical and mental workload of a full season in the Western League," he said.

"I think everybody can be a leader, regardless if you're wearing a letter or not. Work ethic and character is something that everybody is capable of if they choose. These are the foundations to a successful team, and I try to exemplify it everywhere I go. We are a young team with tons of potential and we also have a great locker room in terms of character. This will translate into the next season."