Althought the season ended for Cochrane Minor Soccer on Thursday (Aug. 27), the ball keeps rolling for the club, as they gear up for their fall and winter programming, which will feature competitve games within a cohort.
Sep 8, 2020 12:00 PM By: Tyler Klinkhammer 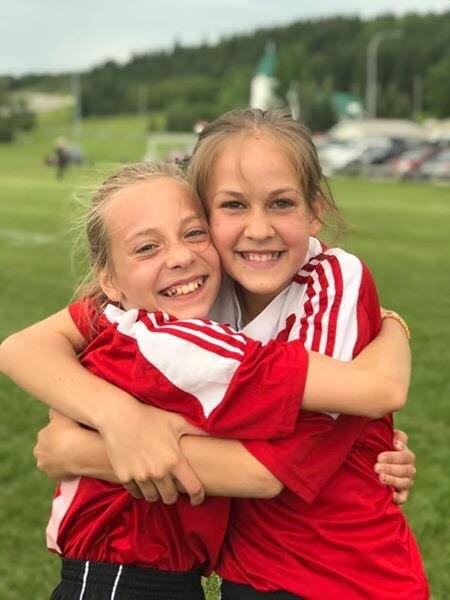 Elise Hagen and Melissande Bosse have each other a hug on the pitch during the 2019 season. Photo Submitted.

COCHRANE— Cochrane Minor Soccer’s summer came to an unceremonious end on Thursday (Aug. 27), after an eight-week season of training and interclub-only play.

Programming coordinator with Cochrane Minor Soccer Rhonda Carr said the club ended the season with the usual training and scrimmage sessions they had been holding this season.

But the ball will continue rolling for the club, as they prepare for the fall and winter seasons.

“We didn’t have any ceremony, we just kind of finished up and that was that. It rolls right into our fall program, which starts up next week on September 7. Most of the kids are re-enrolled anyways, so it’s just kind of a good week break for everybody to get ready for back to school,” Carr said.

The fall season runs for four weeks, beginning on Monday (Sept. 7), and will actually feature games within a cohort that includes two teams from Calgary.

The U11 Boys and U13 Mixed teams are both enrolled in the Cochrane-Calgary cohort.

“Calgary Minor Soccer league opened up a tournament within cohort rules. They took the summer to figure out how they could do as close to normal gameplay as they could,” Carr said. “They’ll get to play some actual games this fall, so it’s just a little tournament where they play a game or two a week.”

Carr said that at the end of the season there will be a cash prize for the winner in lieu of the usual medals given out, but the prize is not the point of the season.

“Mostly it’s about the gameplay, and how close we can get to normal versus the result,” she said.

The kids enrolled in Cochrane Minor Soccer were able to play inter-club scrimmages against one another this summer, but those games got stale for some, Carr said.

Many of the kids are excited for the possibility of regular gameplay, after a summer of training and inter-club play.

“They’re pretty sick of playing each other and playing the same little group of kids over and over and over again. They’re looking forward to something new,” she said.

Cochrane Minor Soccer also has the go-ahead for games this winter, as long as there are no changes to the cohort rules between now and then.

Three teams, forming a cohort of 50, will play each other a few times in a row, then take a two-week break, and move into another cohort with new teams.

In that system, Cochrane Minor Soccer will be able to offer a near-normal season with competitive play.

While the two competing teams are full, there are still spots open for those who would like to register for fall programming with Cochrane Minor Soccer.