Cochrane Cobras star quarterback Xavier Vaillancourt is hitting the big stage. The soon-to-be Grade 12 athlete has been one of the 73 players selected to suit up in the Canadian Football Chat (CFC) Prospect Game June 1 at TD Place Stadium in Ottawa.
May 9, 2019 1:00 AM By: Troy Durrell 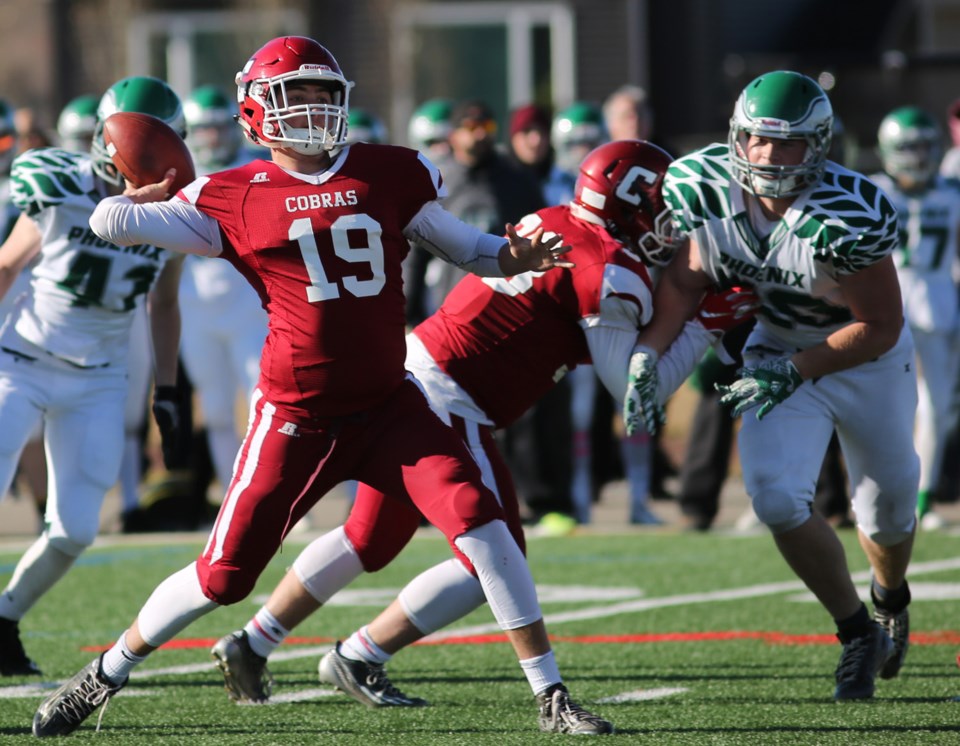 Cochrane Cobras quarterback Xavier Vaillancourt has been selected to play in the CFC Prospect Game.

Cochrane Cobras star quarterback Xavier Vaillancourt is hitting the big stage. The soon-to-be Grade 12 athlete has been one of the 73 players selected to suit up in the Canadian Football Chat (CFC) Prospect Game June 1 at TD Place Stadium in Ottawa.

Vaillancourt said he was estatic when he heard he was selected to play in the game, which brings the top high school players from around the country to showcase their talents.

"I was just very proud," Vaillancourt said. "I've been working very hard, running, lifting weights and throwing so it always feels nice to have some proof that you're doing the right thing. In the off season it's sometimes hard to feel like you're accomplishing something without any games so this selection was nice."

"Established in 2010, CFC quickly became the top recruiting resource and website for high school football players and coaches. The CFC100 player rankings first class ranking was produced in 2014. In the 2018 Canadian Football League (CFL) draft, 20 of the 25 class 2014 college players drafted were ranked in the first ever CFC100 ranking.  The CFC100 combine, an event designed to identify current and future CFC100 prospects, was launched in 2017, with combines in Vancouver, Toronto, Ottawa, and Halifax," CFC said in a statement about the game.

The newest and biggest event is the ‘Canadafootballchat.com Prospect Game’ which will be broadcast on The Sports Network (TSN) the following day on June 2. The event will be for players born in 2002 or later and on track to qualify as a national player in the Canadian Football League (CFL).

"It definitely brings nerves into play but so does any big game," Vaillancourt said of having the game shown on television for the whole country to see. "Every game I play I want to go out and show my best stuff so I think I'll be able to manage my nerves and play very well."

"I have to play my game and take in the experience. I definitely want to show my arm strength and make the correct reads. I'm very excited to get to play under coach (Henry) Burris."

Burris, a former two-time Grey Cup winning quarterback in the CFL with both the Calgary Stampeders and Ottawa REDBLACKS will be a guest coach in the game along with another CFL Hall of Fame inductee Matt Dunigan, who holds the record for most passing yards (713) in a single game while also winning two Grey Cup's in 1987 with the Edmonton Eskimos as well as in 1991 with the Toronto Argonauts. With Vaillancourt playing the same position as Burris and Dunigan, the young quarterback said it will be great to be able to pick the brain of two of the game's great players.

"I'm always willing to increase my knowledge of the game. I think that's the biggest thing I can learn from them," Vaillancourt said. "Improving my footwork and arm talent comes with time but learning more about the game of football is something that coach Burris and Dunigan will have a lot of in depth information to share with me."

"Henry (Burris) was the quarterback of the Stamps when I first started to play the position so I looked up to him a ton at the start of my career."

Vaillancourt is the only player from Cochrane who made the cut and said he couldn't have done it without the coaching of Cobras head coach Rob McNab and the remainder of the Cobras brand.

"I love playing for coach McNab," Vaillancourt said. "He's helped me tremendously in the couple of years I've been with him and I think his offence fits my style of play perfectly. Practicing with coach McNab and refining my footwork with my dad is how I keep myself ready to go at all times."

"I like representing the Cobras wherever I go. The Cobras already have such a great name built up with all the USports players and professionals who have played in the CFL, so I just want to continue that legacy."