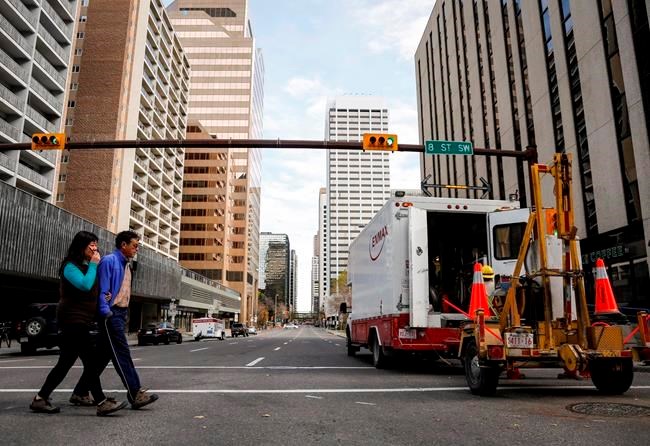 Calgary's downtown office vacancy rate is on track to top 30 per cent and potentially reach a level unseen in a major North American city since the 1930s, a commercial real estate firm said Thursday.

The firm now predicts Calgary's downtown vacancy rate will reach 30 per cent sometime in the next three months, with over 14 million square feet of empty space. Avison Young's worst-case projections show the vacancy rate climbing to 34 per cent before it tops out.

News reports from the 1980s suggest Houston hit an office vacancy rate in the low 30s during that decade. Denver's downtown also struggled during that time. (Comparing vacancy rate statistics over time can be difficult because different brokerages use different formulas. Some look only at buildings over 100,000 square feet, while others look at all buildings over 20,000 square feet, for example.)

But in Canada, a downtown vacancy rate above 30 per cent is unprecedented — and it's "exceptionally rare" everywhere else, said Avison Young insight manager Susan Thompson. If the office market vacancy rate was to climb to 34 per cent, it could be a North American record.

"That kind of vacancy rate has not been seen in a modern major office market since probably the Depression era," Thompson said.

"I sit on conference calls with my global counterparts around the world and they all shake their heads and say, 'that's not a number I can wrap my head around.' "

Calgary's downtown has been severely impacted by years of low oil prices and a wave of mergers, acquisitions and layoffs in the oil and gas sector. In one high-profile example, the merger of Cenovus Energy and Husky Energy earlier this year was expected to result in more than 2,000 layoffs — the majority in Calgary.

Energy and related engineering companies occupied 57 per cent of downtown Calgary in 2012. They now occupy just 32 per cent of the city's downtown core. Five of downtown Calgary's 170 office buildings are currently completely empty, according to Avison Young, and there are an additional seven properties with at least 75 per cent vacancy.

But as dire as the latest numbers are, Thompson said, there are hopeful signs.

The vast majority of commercial real estate deals occurring in Calgary's downtown right now are for offices under 10,000 square feet. Though those small deals won't make up for the large oil and gas tenants being lost, it does indicate that other industries — including the high-tech sector — are moving in.

Real estate is a lagging economic indicator, Thompson said, so office market vacancy rates take a while to start improving even as local conditions improve.

"It takes some time to play out," she said. "But we do eventually see the tide turning."

In April, Calgary city council voted to spend $200-million on the first phases of strategy aimed at finding a long-term fix for the downtown. The approved plan calls for investments in infrastructure, amenities and streetscape improvements, as well as the setting aside of $45-million in available incentives for office-to-residential conversion projects.

"It will take time to see the impact of the plan, but we are working towards a better future for Calgary’s downtown space," said Brad Parry, interim chief executive of Calgary Economic Development, in an emailed statement.

“While these (vacancy) numbers are not where we’d like them to be, we do expect to see them change in the coming year as markets around the world begin to reopen and people get back to pre-COVID activities,” Parry said.

This report by The Canadian Press was first published July 23, 2021.