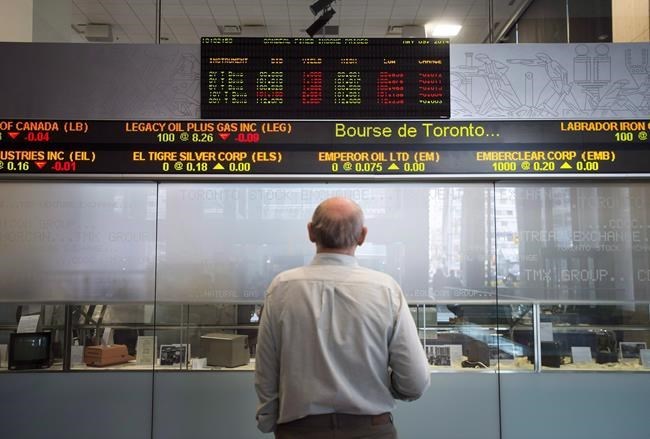 TORONTO — A broad-based rally led by energy and financials helped North American stock markets to recover from big losses early in the week over concerns about rising inflation.

It started with three losing days in a row after U.S. inflation numbers spooked investors into worrying that the Federal Reserve would taper its loose monetary policy.

Markets rebounded on Thursday and Friday as fears subsided and flat retail sales data in April suggested that the central bank is probably further away from tapering and raising rates than was thought at the beginning of the week.

"I actually think that perhaps the market is reading too much into the single data point that comes out from any economic report," Petursson said in an interview.

U.S. stock markets fared a bit worse than the TSX over the past week, losing between 1.1 and 2.3 per cent, but it wasn't all that bad considering last week ended with three of the four stock markets closing at record high levels, Petursson said.

Financials have been the story of the week as banks benefit from a steeper yield curve, while energy and materials continued to be the driver they've been all year, he said.

Ten of the 11 major sectors on the TSX were higher on the day, led by energy, health care, financials and materials.

Energy rose 2.7 per cent as crude oil prices climbed above US$65 a barrel with service being restored on the Colonial Pipeline after it paid ransom following a cyberattack.

"You pay enough money you can solve any problem, and so that has, I think, alleviated the excess supply concerns that the market may have held with respect to oil," said Petursson.

Shares of MEG Energy Inc. climbed 7.3 per cent, while Vermilion Energy Inc. rose 4.2 per cent and Cenovus Energy Corp. was 3.7 per cent higher.

The heavyweight financials sector gained 1.3 per cent, led by about six per cent gains by Canaccord Genuity Group Inc. and Brookfield Asset Management Inc. Banks were up as much as one per cent.

Materials rose with an increase in metals prices.

Technology has faced a challenging week but increased on the day with Lightspeed POS Inc., BlackBerry Ltd., and Shopify Inc. up 5.2, 5.1 and 3.1 per cent, respectively.

Petursson expects the growth sector will continue to come under pressure moving forward.

"As inflation expectations continue to move higher, that's really going to weigh on valuation and so I think the tech sector is probably the one to watch as far as continued weakness."

Meanwhile, shares of SNC-Lavalin Inc. surged 16 per cent after reporting quarter results. And Air Canada increased 5.6 per cent, in line with U.S. airlines and others in the tourism sector, after the Centers for Disease Control and Prevention said fully vaccinated Americans can stop wearing masks.

The Canadian dollar traded for 82.58 cents US compared with 82.30 cents US on Thursday.

The loonie has enjoyed a strong run since the Bank of Canada indicated it would start pulling back on its financial stimulus.

"It wouldn't surprise us to see it hold here or maybe retrace just a little bit before we see that next leg up towards potentially 84 cents," Petersson said.

"The expectation over the next two years is that the Bank of Canada could move faster than the Fed and so two-year rate expectations are moving up faster in Canada than in the United States and that tends to move the Canadian dollar."

This report by The Canadian Press was first published May 14, 2021.