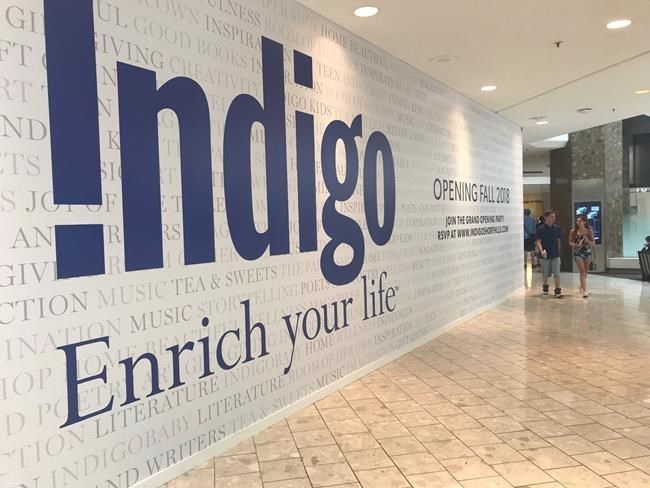 Workers at two more Indigo Books and Music Inc. stores have voted in favour of unionization, bringing the total to three locations.

Kevin Shimmin, a national representative with United Food and Commercial Workers Canada, said Tuesday the Mississauga and Coquitlam stores have unionized with UFCW while the Montreal store is with another union in Quebec.

He said more stores could be joining the union drive in the coming months.

"We have been signing cards in other stores and there’s definitely interest from other employees," Shimmin said. "But we haven’t gotten to an application yet."

Shimmin said the company has responded to the unionization efforts with promises to improve wages and working conditions at stores across the country.

"They've announced a whole pile of improvements — I'm sure to try and stop unionization at other stores," he said. "They've promised wage increases, opportunities for promotions and the closure of the customer washrooms."

He said some of those promises have already been broken, such as continuing to require workers to clean customer washrooms at some locations.

Indeed, Shimmin said cleaning customer washrooms emerged as a major issue for some Indigo workers during the pandemic, and propelled employees at the Square One Shopping Centre in Mississauga to lead the charge to unionize last month.

He said employees at the store have elected their negotiating committee, and are preparing for negotiations with the company on the first collective agreement.

Shimmin said the key issues include wages and benefits, consistent scheduling, getting enough hours and health and safety during a pandemic.

The longtime union organizer said he finds the efforts by Indigo staff to unionize exciting.

"It's a really kind of beautiful new style of organizing where the campaign itself was driven by the workers, who are quite young, through social media," he said. "They've managed to get support from some big-name authors and politicians."

Indigo did not respond to a request for comment.

The unionization drive comes as Indigo has been severely impacted by the COVID-19 pandemic.

The Toronto-based retailer said it lost $171.3 million or $6.22 per diluted share in its most recent quarter, compared with a loss of $23.8 million or 86 cents per share a year earlier.

Indigo's same-store sales for online and retail stores, a key metric in the retail sector, fell 7.9 per cent in the quarter.

This report by The Canadian Press was first published Oct. 27, 2020.

Companies in this story: (TSX:IDG).

Laurentian Bank reports Q4 profit down from year ago, but beats expectations
Dec 4, 2020 6:18 AM