Americans get a break on masks. What about Canada? : In The News for May 14 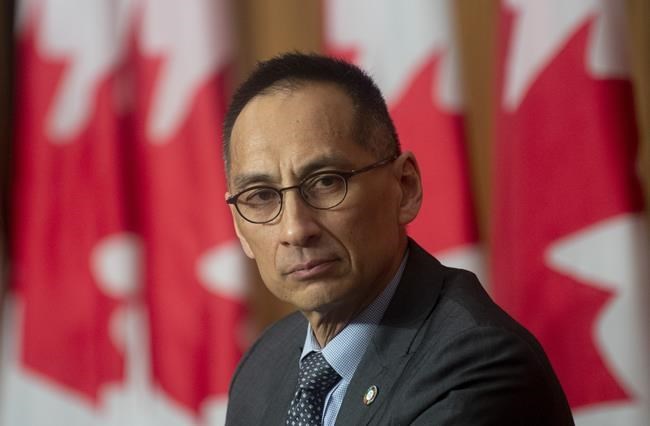 In The News is a roundup of stories from The Canadian Press designed to kickstart your day. Here is what's on the radar of our editors for the morning of May 14 ...

What we are watching in Canada ...

The U.S. Centers for Disease Control and Prevention says people fully vaccinated against COVID-19 no longer need to wear masks outdoors and in most indoor settings,

Canada's top public health officials suggests a different approach would be taken north of the border.

"We have more of what I'd call a collective or community approach," says Dr. Howard Njoo, deputy chief public health officer. "So it's not about what an individual should be able to do with one or two doses."

He says even as more Canadians get their shots, public health measures such as physical distancing, mask wearing and frequent hand washing remain key.

Njoo says the rate of new infections, the number of new cases resulting from each infection, test positivity rates and impact on the health-care system are all factors that should be weighed.

"If all that is looking good at a certain point in time — along with high vaccine coverage — that's the point I think that certainly local health authorities will be able to consider loosening restrictions on what Canadians are able to do."

Njoo says 40 per cent of eligible Canadians over the age of 18 have now received one vaccine dose — good, but not maximum, protection.

More than 46 per cent of the U.S. population has been given at least one dose and more than a third given both.

A judge is expected to rule on a challenge of the United Conservative government's inquiry into whether foreign groups have conspired against Alberta's oil industry.

The environmental law firm Ecojustice alleges the Public Inquiry Into Funding of Anti-Alberta Energy Campaigns is biased against charities that have raised concerns about the industry.

It has asked a judge to strike down the inquiry that it calls politically motivated.

The provincial government and some industry leaders have said Canadian environmental charities that accept U.S. funding are part of a plot against Alberta's energy industry.

The province has said the plot aims to block pipelines and landlock Alberta's oil to benefit its American competitors.

Legal scholars and non-profit groups say the inquiry is an attempt to bully and silence industry critics.

U.S. President Joe Biden pledged an aggressive response to the cyberattack that temporarily shut down the Colonial Pipeline and warned gasoline stations on Thursday not to engage in price gouging as motorists wait for fuel to start flowing back to their communities.

“Do not, I repeat, do not try to take advantage of consumers during this time,” Biden said at the White House. “Nobody should be using this situation for financial gain. That’s what the hackers are trying to do. That’s what they’re about, not us. That’s not who we are.”

The pipeline, which reopened Wednesday, posed a fresh set of risks to a presidency still in its early stages.

But Biden ascended to the White House as a crisis manager and knows that the possible economic damage from spiking gas prices could also jeopardize his ambitious agenda and Democrats’ control of Congress.

The president said he expects the pipeline to resume normal operations by next week and stressed the importance of improving the durability of U.S. infrastructure as part of his $2.3 trillion jobs plan. Biden said the government would take action to stop future cyberattacks, though he declined to comment on whether Colonial had paid a ransom.

“We do not believe the Russian government was involved in this attack, but we do have strong reason to believe that the criminals who did the attack, are living in Russia,” he said. “We’re also going to pursue a measure to disrupt their ability to operate. And our Justice Department has launched a new task force, dedicated to prosecuting ransomware hackers to the full extent of the law.”

What we are watching in the rest of the world ...

Families toting supplies sought refuge on Friday in temporary shelters in central Gaza City as Israeli artillery pounded northern Gaza in an attempt to destroy a vast network of militant tunnels. The assault brought the front lines closer to dense civilian areas and paved the way for a potential ground invasion.

Fleeing families arrived in pickup trucks, on donkeys and by foot at schools run by the United Nations, hauling pillows and pans, blankets and bread. Men lugged large plastic bags and women carried infants on their shoulders, cramming into classrooms.

One mother who fled to a downtown school with her children said "nothing remains for us” back home in the northern town of Beit Lahiya. Her son, Othman, said he had felt the family's house “shake up and down,” adding that “everyone was running.”

A chaotic and contentious pipeline debate began in the House of Commons. The Liberal government caused an uproar by limiting each stage of debate on a bill loaning Trans-Canada Pipe Lines $80 million to build a natural gas pipeline from Alberta to Ontario. The controversy helped cause the Liberals' defeat in the 1957 federal election.

The social media platform unveiled a feature this week that gives users the option to display up to four pronouns next to their profile name.

Instagram says the new option is being made available after pronoun sharing was already "widely adopted by our community."

Among the current selections are "he" and "she," as well as the non-gender-specific pronouns "they," "ze" and "ve."

However, at least one user pointed out that Instagram's list is missing the gender-neutral Mi’kmaq pronoun "nekm."

The Federal Court has ruled the Conservative party was within its rights to use CBC news footage for election attack ads.

In his decision, Judge Michael Phelan found the party's use of the material on television and in four tweets in the run-up to the 2019 vote amounted to fair dealing and did not infringe CBC's copyright.

“The ultimate purpose was to mount a political campaign to secure votes to form a government,” Phelan wrote. “The purpose was one of engaging in the democratic process. The evidence is that the use of the CBC works was for this legitimate political purpose.”

At issue were a Conservative ad and tweets that used clips from CBC news programming and from the leadership debates. The ad, for example, showed Justin Trudeau asking the viewer to “look at what we've done” along with news clips that invited unfavourable conclusions about his performance.

The CBC insisted such use of its material could compromise its journalistic integrity and impartiality.

Phelan did showed some sympathy for the complaint.

“The CBC, as a state owned enterprise, is being reasonable in its concern to neither be, nor appear to be, politically partisan,” Phelan said. “There is no evidence to support the accusation that CBC is acting irrationally in protecting its rights.”

This report by The Canadian Press was first published May 14, 2021