Caution, with a time limit: How Trudeau's patience with rail blockades ended 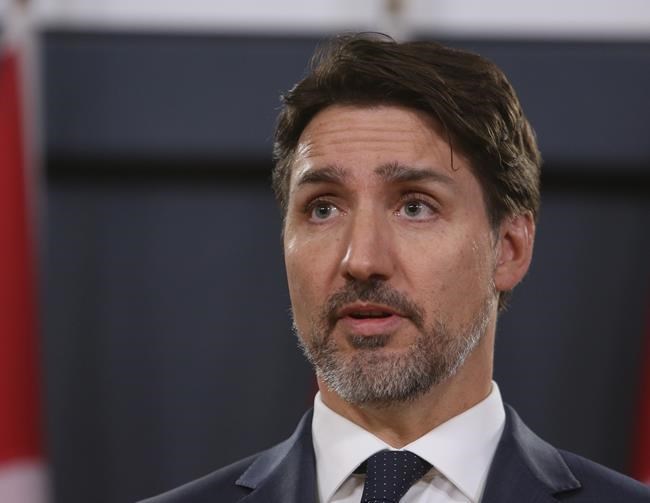 OTTAWA — When Prime Minister Justin Trudeau stepped in front of cameras last week to declare that barricades on rail lines and other major transportation routes had to come down, the move had been decided almost two days before.

He intended to send a signal to the police that attempts to negotiate an end to the national crisis were not working and the situation was now in their hands, according to two sources with knowledge of the matter.

Trudeau had been urging patience in the hopes of seeing the rising crisis end through negotiation, but a final 36-hour clock had run out.

The Canadian Press spoke with three government officials, including in the prime minister's office and that of B.C. Premier John Horgan, to get a picture of what has been happening behind the scenes as the blockades rose to national attention and how the governments have seen the growing crisis.

The officials all spoke on condition of anonymity because they were not authorized to discuss sensitive matters in public.

The blockades were sparked when the RCMP began enforcing a court order against Wet'suwet'en protesters and their supporters blocking construction of the Coastal GasLink pipeline in northern British Columbia. Some hereditary chiefs of the Wet'suwet'en nation oppose the pipeline on their territorial land and have been trying to block the project for almost a decade.

Before the nationwide protests erupted, the opposition to the pipeline was seen as a matter for the B.C. government, which oversaw the project's planning and approvals.

The Wet'suwet'en had established a presence in the area of the pipeline construction, including on the only access road to a Coastal GasLink work site.

After the pipeline company was granted an injunction in early January ordering protesters to clear the road, Hereditary Chief Na'Moks, who also goes by John Ridsdale, called for a meeting with Trudeau and Horgan and some of their cabinet ministers via letter.

The sides could not agree on how any talks might happen, or even who should take part. But in the end, former NDP MP Nathan Cullen, hired by the B.C. government as a liaison between the hereditary chiefs and the province, negotiated an meeting called a "Wiggus table," named for a Wet'suwet'en term that translates roughly as "respect." British Columbia's delegation was led by Indigenous Relations Minister Scott Fraser.

It was supposed to mean seven days of discussions. Those ended after just two, on Feb. 4.

"Talks have broken down between the province and the Wet'suwet'en," Hereditary Chief Smogelgem (who also goes by Warner Naziel) tweeted at the time. "Efforts to de-escalate the situation on the territories were severed when the province refused to pull the permits they issued to CGL (Coastal GasLink). CGL felt that further talks with the province was not enough."

The RCMP began arresting people along the access road. As images of Indigenous land-defenders in handcuffs emerged, solidarity blockades began popping up along roads and railways across the country.

Trudeau was in Africa when the blockades began, on an eight-day effort to build support for a bid for the UN Security Council. His absence fed the perception that Ottawa was not on top of the situation, though Deputy Prime Minister Chrystia Freeland chaired a meeting of the cabinet's "incident response group." Trudeau dialled in, according to the two federal officials.

By the time the prime minister returned to Canada in the early hours of Feb. 15, it was clear to the Prime Minister's Office that a second international trip, to a summit in the Caribbean, would have to be cancelled, the senior member of Trudeau's staff said.

That day, Indigenous Services Minister Marc Miller, a Montreal MP who has learned some Mohawk, was dispatched to Tyendinaga Mohawk Territory in Ontario to talk to protesters barricading a major rail line between Toronto and Montreal. He went to "polish the chain," he said then, a reference to a pre-Confederation treaty named for a silver chain because silver sometimes needs work to keep it shiny.

Crown-Indigenous Relations Minister Carolyn Bennett went to British Columbia in hopes of talking to the Wet'suwet'en hereditary chiefs at the heart of the protests, though that came to nothing.

Ontario's Ipperwash crisis and the resulting inquiry's findings have been in the minds of many involved in the current situation, one of the federal sources said.

In 1995, members of the Stony Point First Nation occupied Ipperwash Provincial Park over a claim for land expropriated by the federal government for a military training camp in the Second World War and never returned.

Two days later, Ontario Provincial Police officers in riot gear descended on a small group of protesters who had left the main encampment. In the melee, Indigenous man Dudley George was shot and killed by an OPP officer.

The inquiry report criticized the OPP for a lack of training for officers on Indigenous rights and for racism in the force. It also rapped police and the government for not trying to negotiate with the protesters or even communicate.

"Ipperwash is a cautionary tale about the difficulties of police/government relations in practice," says the report.

"Ipperwash demonstrates the need for a clearer understanding of the respective roles and responsibilities of the many parts of government that may have a legitimate role in resolving Aboriginal occupations or protests."

Some of Trudeau's top aides had been in the Ontario government when the Ipperwash report was released in 2007. They wanted to be careful.

But the number of protests grew. At one point, there were close to four dozen blockades of rail and highway traffic across the country. Workers were being laid off and trains had been halted in key corridors for two weeks. Rail companies had secured injunctions the police were not acting on.

Conservative Leader Andrew Scheer laid into Trudeau for showing "the weakest response to a national crisis in Canadian history" on Feb. 18.

Alberta Premier Jason Kenney on Feb. 11 had denounced the protests as a form of "ecocolonialism" that isn't in Indigenous people's interests and called for the police to enforce the law. He repeated the call Feb. 19, objecting to the mockery being made of Canada's laws.

Trudeau did not engage Kenney. (In contrast, the official in Horgan's office said the federal and B.C. governments have been in near-constant contact.) But Trudeau did pointedly exclude Scheer from a meeting of federal party leaders on the crisis, saying Scheer's fiercer rhetoric had disqualified him from participating.

Afraid of the impacts of shortages, Trudeau pushed his staff and cabinet officials to find a way to get chlorine, propane and other crucial supplies into Quebec and provinces in the east, the senior PMO source said.

Transport Minister Marc Garneau negotiated a deal that saw goods normally shipped by Canadian National Railway sent instead on its competitor Canadian Pacific's lines. This was kept quiet: the railways feared protesters would set up new blockades to halt alternate routes, according to both federal sources.

Finally, it was clear that negotiations wouldn't bring the blockades down soon because there were none.

The RCMP in B.C. said they would leave an outpost on the disputed access road. The hereditary chiefs added requirements that the RCMP leave traditional Wet'suwet'en territory entirely and that Coastal GasLink cease work to their preconditions for a meeting.

Hereditary Chief Smogelgem tweeted Feb. 20 that even the promise to close the outpost was meaningless.

"(The RCMP's) harassment of our people and supporters continues," he wrote. "Now they’ll simply base their Mounties out of the local town of Houston. They are trying to instruct us to continue letting CGL do their work and ignore the eviction that we served them with. OUR EVICTION STANDS! "

Trudeau's camp had already reached the conclusion that attempts at dialogue were at an impasse but had decided to wait 36 hours more to see whether anything would change. It didn't.

On Friday, Feb. 21, Trudeau donned a navy suit and stood at a lectern in the national press theatre, his face set, his tone stern.

"The situation as it currently stands is unacceptable and untenable," he said.

"Everyone involved is worried. Canadians have been patient, our government has been patient. But it has been two weeks and the barricades need to come down now."

Trudeau and his ministers, including Blair, had insisted they could not order the RCMP or other police to do anything. But sending a signal to police is not the same as directing them, one of the federal sources argues. Trudeau's public statement told the police that the work behind the scenes wasn't getting anywhere.

Since then, the situation has quieted. B.C.'s Bennett and Fraser spent Friday and Saturday meeting with the hereditary Wet'suwet'en chiefs in British Columbia. There remains one rail blockade at Kahnawake, a Mohawk territory in Quebec.

Renewed calls have been made by the hereditary chiefs for Trudeau to meet with them himself. He said in the House of Commons this week that such a meeting would inappropriately favour one group among the Wet'suewet'en, who need to determine amongst themselves who will speak for them.

But he still might, one of the federal sources said, depending on the progress of the current talks.

Trudeau will not become directly involved unless a significant progress is made towards a resolution, the source said, adding that Trudeau is the negotiator of last resort and should only be brought in if there is a good prospect of success.

This report by The Canadian Press was first published March 1, 2020.