Creation of wrongful conviction review board edging closer to reality 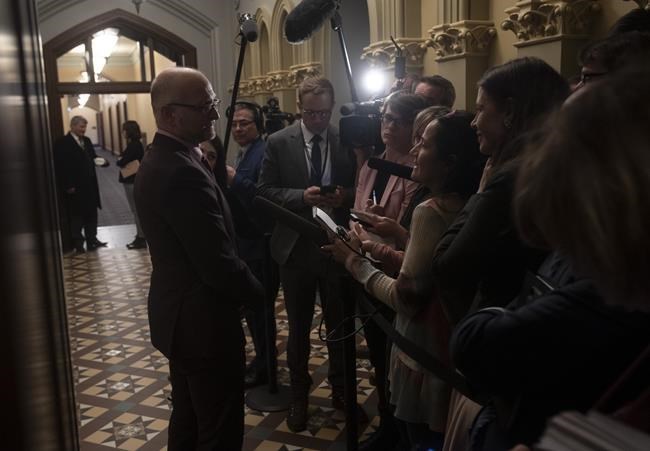 TORONTO — A new independent panel that would review claims of wrongful convictions is edging toward reality, as the Liberal government moves forward on one of its campaign promises.

Signs of progress toward creating such a board came last week in Ottawa, where Justice Minister David Lametti met with a working group that includes David Milgaard, who spent 23 years in prison for a murder he didn't commit.

"I very much appreciate the insight and guidance provided by the working group during our meeting," Lametti said in a statement to The Canadian Press. "It is important for me to hear directly from experts and stakeholders to determine the path forward on this important commitment."

While Canada enjoys a robust criminal justice system, mistakes do happen. The current remedy lies in a ministerial review process in which only the most obvious system failures are referred back to the courts for a final decision.

James Lockyer, a prominent lawyer who chairs the working group, said other countries have an independent commission on which a Canadian version should be modelled.

"The potential for the wrongly convicted of the creating of an independent tribunal is really quite staggering," Lockyer said. "It would be pretty revolutionary because it would put a fail-safe back end to the criminal justice system for those who've been wrongfully convicted, for those who've lost their appeals."

Over the past four decades, the Canadian system has sent 29 cases back to the courts — roughly 0.7 cases a year — but research indicates the actual number of wrongful convictions is likely much higher. Almost all referred cases have seen convictions quashed, as ultimately happened with Milgaard.

By contrast, the British system set up 22 years ago — Scotland has its own — has referred 679 cases to the courts — about 33 a year — and led to 447 quashed convictions, according to latest figures. About one quarter are for the most serious crimes, such as murder.

While Lametti offered few details about how he envisages such a board, among key decisions he will have to make would be the test for referring cases back to the courts. Now, the minister has to be satisfied there's a "reasonable basis to conclude that a miscarriage of justice likely occurred."

Lockyer's group is proposing the test be a "real possibility an Appeal Court would allow the appeal."

Lametti once served as a law clerk to former Supreme Court justice Peter Cory, who two decades ago led a public inquiry in Manitoba into the Thomas Sophonow case. Sophonow was tried three times and wrongfully convicted twice of killing a teenager. Cory recommended creation of an independent entity to review wrongful-conviction claims.

The minister also noted he had handled the case of Glenn Assoun, a Nova Scotia man who spent 17 years in prison after being wrongly convicted of murder.

"One of my first acts when I was named minister was to carefully review and ultimately order a new trial in the case of Glen Assoun," Lametti said. "I take my responsibility in this regard very seriously."

The government will also have to decide on the composition of a commission, although members would likely be appointed by the prime minister. Boards in other countries, for example, comprise about a dozen people, of whom one-third must have substantive legal training and at least two thirds must have experience in the criminal justice system.

"More often than not, in the serious cases, it will be lay people who will have decided on guilt or innocence — the jury," Lockyer noted.

The working group promised Lametti it would provide a detailed view in the next six to eight weeks of what it believes enabling legislation should look like.

Lockyer, who began advocating for the wrongfully convicted in 1993, said one of his key priorities has been the creation of an independent board — something that finally seems to be in the works.

"I left there feeling really good," he said of the meeting with Lametti.

This report by The Canadian Press was first published on March 1, 2020