Fishermen in B.C. catch a barracuda far from its nearest home in California 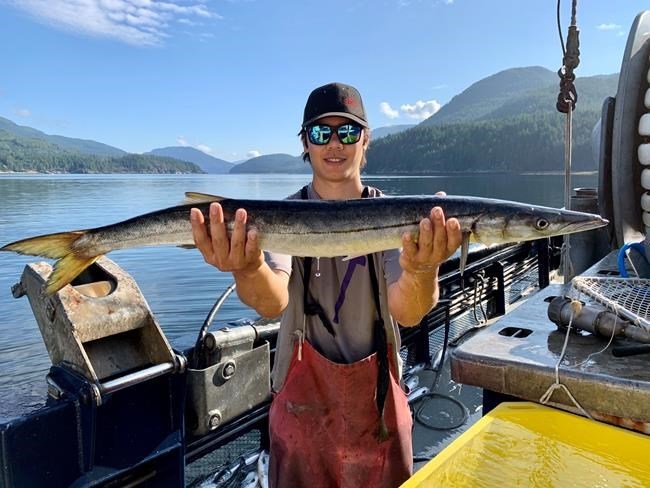 PORT ALBERNI, B.C. — A commercial fisherman knew he was staring at a fish out of place when a barracuda landed in his net on Vancouver Island, far from its typical habitat in southern California.

Tyler Vogrig, 24, said he'd seen the long, silvery body of the muscular fish with giant teeth before, but in Hawaii.

Vogrig said he and his father Brian were catching sockeye at Alberni Inlet as part of their stock-assessment work for Fisheries and Oceans Canada when they hauled in the barracuda.

"We couldn't believe it," he said from his home in Vancouver. "The fish was docile because it was being chased by some seals and one of the seals actually nipped it on its tail so it had a little gash on it."

The duo placed the weak, predatory fish in a tank to recover for about 30 minutes and contacted Fisheries and Oceans.

They snapped some photos of the fish, which he believed weighed about five kilograms, before releasing it.

Now, they have quite a tale to tell about an adventure earlier this month aboard their purse seiner, the Nita Maria.

"It's just really cool and there's just no chance I'll ever forget that," Vogrig said.

His father has been fishing for 40 years and had never seen a barracuda in British Columbia waters, he said.

Jackie King, a research scientist with the Department of Fisheries and Oceans, said the presence of Pacific barracuda in British Columbia waters is rare.

"But we have had some recorded in our commercial fisheries as far back as 1987 and then huge gaps between when they're appearing again," King said, adding a barracuda was spotted in British Columbia in 2016 and 2019.

The fish are normally found in Baja California in Mexico, bordering the state of California, but have also recently been seen as far north as Washington state neighbouring B.C., likely due to warming waters at home, she said.

"It's more evidence of the impacts of climate change on our marine ecosystems."