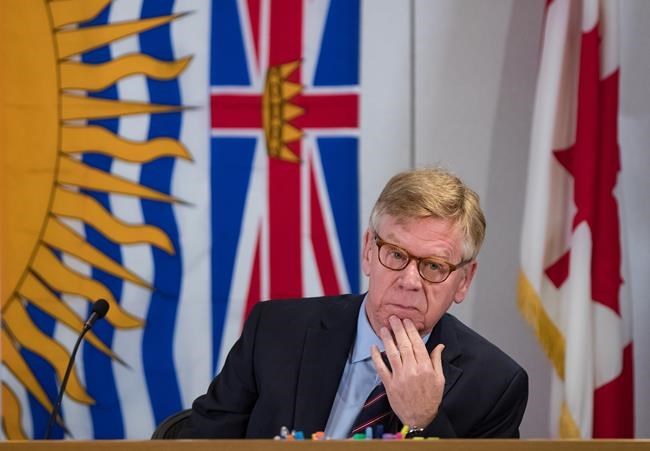 VANCOUVER — Vast amounts of cash started flowing into British Columbia's largest casino in 2010 and transactions of $800,000 or more became common as players hauled in bags, suitcases and backpacks full of cash, an inquiry heard Monday.

Steven Beeksma, who worked as a surveillance manager at the River Rock Casino in Richmond, recalled one case in 2014 of a player bringing in $200,000. The player then lost $6,000 and cashed out with $194,000 in $100 bills, which would receive less scrutiny when  deposited in a bank, he said.

"This would be a case of refining, where the player was using the casino to exchange his $20 bills for $100 bills either for his own purpose or acting on behalf or a third party," Beeksma added.

"We would have no way of knowing, but that behaviour would be suspicious to us."

It's unlikely banks would dispense so much money in $20 bills, said Beeksma, who was employed by the Great Canadian Casino Corp. for 12 years before working at River Rock as an investigator for the B.C. Lottery Corp. starting in 2010.

Beeksma, who works as an anti-money laundering specialist with the lottery corporation, said he did not intervene in the suspicious transactions at the direction of managers who ran the casino.

"We had concerns about the cash's origins for sure," he said  "The concern would be proceeds of crime but with limited information available to us it was more of an assumption at that time."

The B.C. government launched the inquiry after reports outlined how illegal cash was helping to fuel the real estate, luxury car and gambling sectors in the province. The province also commissioned three reports that said those businesses were hotbeds for dirty money.

Beeksma said banned players were seen on surveillance video dropping off bags of cash to patrons in a parking lot.

In one case in February 2012, a person who'd been banned for loan sharking provided a patron with $50,000 in cash in a washroom, according to Beeksma.

An investigation determined the patron had been out for a meal with him and was given gifts including chocolates and roses, the inquiry heard.

The same woman was again handed $50,000 cash in $20 bills as part of a cash drop-off and the money was accepted as a buy-in by the casino, Beeksma said.

"There was no direction that buy-ins of this nature should not be accepted, is that fair?" inquiry lawyer Patrick McGowan asked.

"That's fair, yes," Beeksma said, adding it wasn't uncommon for valuable players to be wined and dined by the general manager.

"He likely had no idea what was about to happen but he put himself in a precarious situation," Beeksma said.

In 2015, new regulations brought in by the B.C. Lottery Corp. included players being interviewed in an effort to determine the source of their money.

The corporation has also brought in measures to control or prevent the flow of dirty money since 2012, including creating an anti-money laundering unit made up of certified investigators and intelligence analysts.

The Great Canadian Gaming Corp., which owns several B.C. gambling sites,  has defended the company's efforts to limit money laundering, telling the inquiry that criticism of the industry is unfounded.

This report by The Canadian Press was first published Oct. 26, 2020.