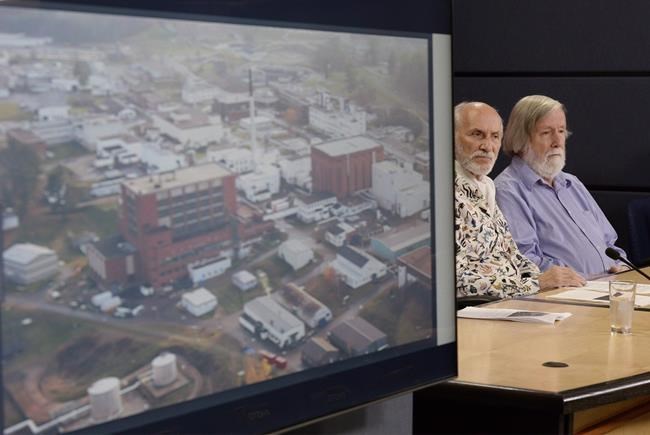 OTTAWA — Several public-interest groups are calling for a suspension of federal decision-making on radioactive-waste disposal until Canada has stronger policies in place.

They say the federal nuclear regulator is poised to rubber-stamp documents that will entrench weak rules for future management of nuclear waste.

They include a giant mound at Chalk River, Ont., entombments of shut-down reactors and a proposed underground repository for burial of nuclear fuel waste.

Speakers said the regulatory plans don't meet international standards and could create unacceptable risks for people and the environment.

The plans are slated for consideration at a Canadian Nuclear Safety Commission on Thursday. The concerned groups say they have not been given a chance to comment on the latest versions of the documents.

The groups are asking the nuclear safety commission not to endorse the draft documents until the federal government has completed a review of radioactive-waste policy and strategy in consultation with the public and Indigenous Peoples.

The commission said Tuesday it would be inappropriate to comment on the regulatory documents given the pending hearing.

All nuclear waste in Canada is safely managed according to international standards at facilities that are licensed and monitored by the safety commission, said Ian Cameron, a spokesman for Natural Resources Minister Seamus O'Regan.

There was an opportunity for public comment on the documents to be considered by the commission Thursday, Cameron said.

"These are evergreen and will be updated. We are currently reviewing the existing radioactive-waste policy and consider how it may be enhanced, including the establishment of an associated radioactive-waste strategy."

Approving regulatory paths now could make "it more difficult for Canada to have as open a mind as it should and the range of options that it should" in dealing with radioactive waste, said Theresa McClenaghan, executive director of the environmental law association.

The proposed regulatory documents are industry-friendly and largely leave decisions about risks in corporate hands, the concerned groups say.

They call the documents "sham regulation" because they impose no requirements for measuring whether the health of Canadians and the environment are protected.

"These decisions have such long-term implications that public transparency and engagement are essential," said Eva Schacherl of the Council of Canadians, who moderated the briefing session Tuesday.

"We should work together to create a Canadian framework for radioactive-waste management that will meet or even exceed international best practices, and indeed we should set a really high standard for others around the world to emulate."

In a letter last month to O'Regan, dozens of civil society groups urged the government to craft a radioactive-waste policy through a public process that involves meaningful consultation with the public, including Indigenous Peoples.

It also recommended the government order the nuclear safety commission to temporarily shelve consideration "of any current or active applications involving radioactive-waste disposition and decommissioning, and pause its acceptance of new radioactive-waste proposals."

Next N.L. premier Furey a political newcomer but a familiar face in the province
Aug 3, 2020 4:22 PM