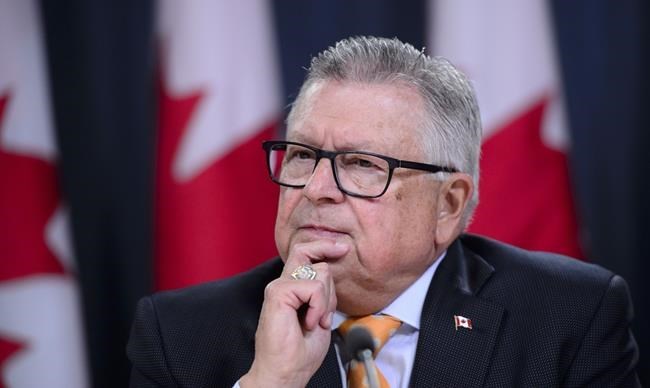 OTTAWA — Canada and the countries that lost citizens when Iran shot down a commercial airliner aren't accepting COVID-19 as an "excuse" for not handing over vital flight recorders, the government's new adviser said Tuesday.

Earlier Tuesday, Goodale was named a special adviser to the Trudeau government into Iran's downing of the Ukrainian passenger jet in January. The veteran Saskatchewan MP was Canada's public safety minister until his defeat in last fall's federal election and has overseen numerous other portfolios, including finance and natural resources.

The appointment follows complaints last week from the frustrated families of some of the Canadians killed in the crash that COVID-19 is detracting from efforts to hold Iran to account. They have also had difficulty getting answers from Ottawa as it responds to the health crisis.

Goodale said he hopes to arrange a meeting with families in the coming days despite the constraints imposed by the need for social distancing to fight the outbreak "to ensure that they know that their priorities, their concerns, their grievances have not in any way been overlooked or forgotten.

"The world is obviously in a considerable state of turmoil now because of the COVID-19 but these other issues need to be addressed too and the families need the reassurance that they are still very much front and centre in the government's priorities."

Goodale's appointment comes as Iran missed a deadline last week to surrender the flight recorders from the jetliner, which the Iranian military shot down on Jan. 8. All 176 people aboard were killed, including 55 Canadian citizens and 30 permanent residents.

And while Iran has been hit hard by the outbreak, Goodale said the regime needs to co-operate with the international community's efforts to get to the bottom of what happened to Ukraine International Airlines Flight 752 in its final moments shortly after it took off from Tehran.

"At the same time, that cannot be used as an excuse for not doing what needs to be done," Goodale said.

"We welcome those commitments, but the fact of the matter is those commitments have not been fulfilled. The black boxes were supposed to be turned over within a two-week period that expired about a week ago."

Iran's representative to the International Civil Aviation Organization in Montreal promised on March 11 to transfer the black boxes to Ukraine within two weeks to assist with its investigation into the crash, but as of March 26 that had yet to occur.

"COVID-19 is an obvious and reasonable excuse for adjustments. At the same time, I think we're still missing a clear understanding on how we're going to proceed," said Andriy Shevchenko, the Ukrainian Ambassador to Canada.

Ukraine knows Goodale well from his most recent job as public safety minister. He worked with the RCMP to help Ukraine launch and upgrade its own national police force following the crisis sparked by Russia's annexation of the Ukraine's Crimea region in 2014, said Shevchenko.

"We believe that a man of his experience and his calibre will help to make our co-operation on PS752 even more efficient."

In a letter sent Saturday to ICAO, the Association of PS752 Families of Victims said the promises made by Iran's representative, Farhad Parvaresh, more than two weeks ago can't be believed.

The letter says Parvaresh "was himself actively involved in spreading the lies and deceit of the Iranian regime during the first three days following the incident."

The letter accuses Iran of purging the crash site of evidence, and destroying the personal property of those killed.

"Cash, jewellery, and even IDs, despite having been seen at the police office, have not been returned to many of the families," the letter states.

"The behaviour of the Iranian regime in response to this flight and its passengers, including the 26 children on board, has been hostile and invidious."

Prime Minister Justin Trudeau says Goodale will examine the lessons learned from the January crash, as well as other air disasters, including Ethiopian Airlines Flight 302 and Air India Flight 182.

Goodale will support ongoing government efforts and come up with recommendations on "tools and mechanisms" needed to prevent future disasters.

"With his decades of extraordinary service to Canada, including as minister of pubic safety, Ralph has the right expertise to guide our response to this air disaster and provide recommendations for best practices going forward," Trudeau said Tuesday in his daily briefing from his Rideau Cottage residence.

"We will also continue to push to see families properly compensated."