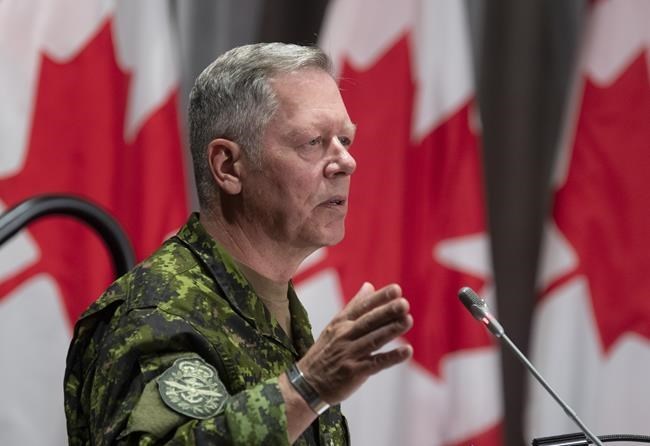 OTTAWA — The outgoing commander of Canada’s military says he first realized the Canadian Armed Forces had a real problem with hate and racism three years ago, when navy sailors identifying themselves as “Proud Boys” confronted Indigenous protesters in Halifax.

Captured on video, the confrontation in July 2017 propelled the right-wing group, which officials are considering adding to Canada's list of terrorist organizations, into the public consciousness.

Gen. Jonathan Vance says it also embarrassed the military — and served as a wake-up call about the threat that hate and racism pose to the Armed Forces.

“Before that, I was quite confident that our stance on values was strong and well articulated,” Vance told The Canadian Press on Wednesday. “I did not see this as a dangerous phenomenon, but one that needed to be dealt with. Proud Boys, that got me.”

Vance was speaking during one of his last media interviews before handing command of the Canadian Armed Forces to Vice-Admiral Art McDonald on Thursday, more than five years after he first took over as Canada’s chief of the defence staff.

Prime Minister Justin Trudeau said last month that one of McDonald’s top priorities will be rooting extremism and systemic racism from the military, which has been battered by revelations of some members’ links to right-wing groups and hate.

The Proud Boys incident involved men dressed in the right-wing group’s trademark black and yellow polo shirts interrupting a Mi’kmaq ceremony in front of a statue of Edward Cornwallis. The ceremony was protesting the former Nova Scotia governor’s treatment of Indigenous people.

Recordings afterward showed the men, one of carrying the Red Ensign, the flag that preceded the Maple Leaf, engaged in a tense debate with the protesters before they left. The Department of National Defence later acknowledged that some of the Proud Boys were members of the Royal Canadian Navy.

“It was not a comical, farcical incident,” Vance said on Wednesday. “It was, to me, sinister.”

That’s because the confrontation in Halifax came amid a resurgence in xenophobia and violent extremism in Canada and other parts of the world, which Vance described as a serious threat due to its ability to undermine trust and openness.

“Xenophobia is dangerous,” he said. “Anything that increases instability … is a worry because instability can turn into open conflict. And xenophobia can be attributed to the beginning of many conflicts, many wars and many tragedies.”

The Proud Boys incident was also troubling, Vance said, because it revealed serious gaps in how the military viewed — let alone dealt with — right-wing ideology and hate.

The military has established new rules around hateful misconduct over the past year, while the commanders of the Canadian Army, Royal Canadian Air Force and navy have all issued their own orders and directives aimed at eliminating such behaviour.

Yet some have suggested the military was slow to act, noting the new rules and orders only come after years of media reports and public incidents linking members with right-wing extremism, white supremacy and neo-Nazism.

Those include one Army reservist who was an alleged recruiter for a neo-Nazi group and is now in custody on firearms charges in the U.S., and a Canadian Ranger arrested in July after allegedly driving a truck through the gates of Rideau Hall with a loaded weapon.

The 4th Canadian Ranger Group is now being investigated for alleged links to right-wing groups, while military intelligence reports identified dozens of other active service members as belonging to hate groups or having made racist or discriminatory statements.

Those reports warned that some right-wing groups in particular might try to infiltrate the military to advance their own agendas, but they also suggested such incidents and individuals were isolated — a message that seemed to be repeated by military commanders.

On Wednesday, however, Vance painted the issue as one of loyalty — to both Canada and the military.

“And then by definition, there is no room for disloyalty. And there's no room at all for those who have ulterior motives, or who would somehow through their belief system, damage, morale and operational output. And so it is an ongoing effort.”

Vance's comments came the same day top officers across the whole of the U.S. military sent an unprecedented letter to their troops that the riot on Capitol Hill on Jan. 6 represented an attack on the American constitution — and reminding them that they all swore an oath to protect the constitution. The U.S. military is investigating whether any of its personnel were among those who participated in the attack.

Vance defended the pace of the Canadian military’s efforts and response, saying it needed to engage in a deliberate approach to define the scope of the problem and identify appropriate responses before communicating it to the Armed Forces as a whole.

And he says all of that initiative can be traced back to the Proud Boys incident.

“That's when we started to really take a look at this,” he said. “The effort to go through the development of that policy, the issuing of that policy in a very timely way, we did it as fast as any policy is developed. And I think a good one.”