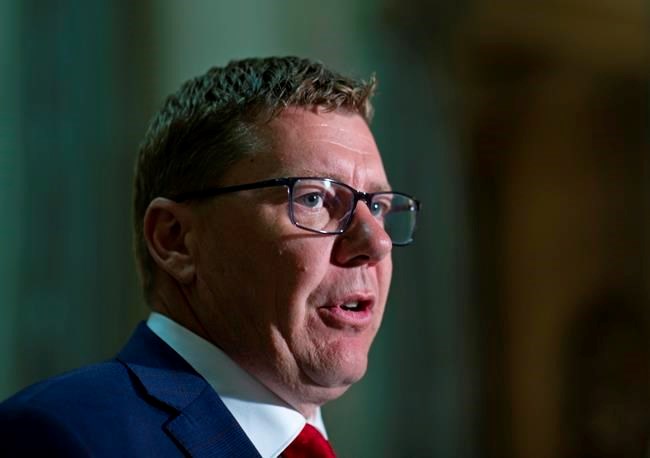 REGINA — Saskatchewan's premier says he and other provincial leaders have asked Ottawa for more flexibility on $14 billion in transfer funds to help people returning to work during the COVID-19 pandemic.

Scott Moe says most initiatives in Prime Minister Justin Trudeau's "safe-restart agreement" are federal ones, and the provinces have little or no input on the parameters.

Moe, who is chairman of the Council of the Federation, says he wants to be able to use some of that money to support industries hit hard by the pandemic, such as the energy sector.

Trudeau has said the offer includes money for personal protective equipment, up to 10 days of paid sick leave for workers without benefits, and support for transit and community programs in municipalities.

Moe says he believes a lot of the money will go towards sick leave, and called it a "trading pawn" for the Liberals because of its minority government.

Trudeau did not specify how the funds would be divided, but Moe says Saskatchewan stands to receive about $450 million.

"We're in different situations across this nation with how it's impacted our economy," the premier told a news conference Tuesday.

"Virtually all of the provinces, I won't say all of them ... have asked for additional flexibility when it comes to the transfer of those funds."

The federation, which includes the premiers of each of the 13 provinces and territories, promotes interprovincial-territorial co-operation and works to foster a constructive relationship with Ottawa.

Trudeau has said the $14 billion would be rolled out over six to eight months, and that the provinces need to show how they plan to spend the money before they get any.