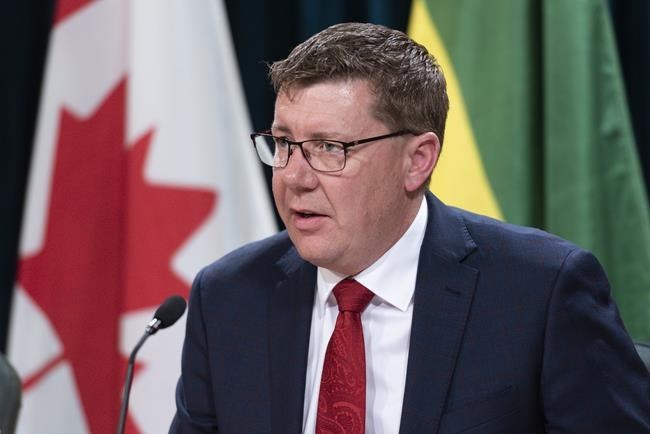 REGINA — Party leaders in Saskatchewan officially began their campaigns Tuesday in an election race defined by the COVID-19 pandemic and the dramatic difference between the two leaders seeking power.

Scott Moe met with Lt-Gov. Russell Mirasty at Government House to ask him to dissolve the legislature and set in motion a 28-day campaign that will culminate with a vote on the pre-fixed date of Oct. 26.

Moe is trying to secure a fourth term for the Saskatchewan Party, and his first mandate from the public as premier. He came to that office two years ago when he won the leadership contest to replace retiring leader Brad Wall.

Moe began his campaign in Regina, one of the cities viewed as a battleground in this election. He asked residents to base their vote on who they trust to steer the economy through a recovery from the pandemic.

He said most business are back operating and emphasized that over the last 13 years, under the leadership of his predecessor, the province's population and economy both grew.

"We have stepped forward with supports throughout the last six months, and you will see in this platform that the Saskatchewan Party will put forward … items that speak to, not only the growth of our economy and the growth of our opportunity, but ensuring that affordability is increased for our families."

One of Moe's goals is to eliminate Saskatchewan's projected $2.1-billion deficit by 2024, so any election promises made will be done with "fiscal prudence."

NDP Leader Ryan Meili said that another Sask. Party victory would usher in four years of austerity at a time when people are struggling for work, waiting for medical services and wrestling with whether to send their children back to school.

At his campaign kickoff, also in Regina, Meili pitched himself as a leader who would improve health care and education, as well as make the lives of workers better with a $15-an-hour minimum wage.

“We’re saying loud and clear to the people of Saskatchewan: You have a choice. You don’t have to settle for Scott Moe and the status quo. You can vote for the change you want."

Meili, who travelled to Moose Jaw afterwards, promised to soon release costs for the promises he has already made, such as bringing in $25-a-day child care.

Saskatchewan will be the third province in the country to send voters to the polls during the pandemic. New Brunswickers went to the polls earlier this month and an election has been called in British Columbia for Oct. 24.

Moe's Saskatchewan Party had 46 seats in the legislature at dissolution, while the Opposition NDP had 13.

Jim Farney, head of politics and international studies at the University of Regina, said the stakes are high for the NDP this time around. A good showing, he said, would be between 20 and 25 seats.

But if there’s a repeat of past elections, with increasingly fewer seats, Farney said he can't imagine "how people don’t start looking around the party and going 'something is fundamentally wrong.’"

Farney said Moe's message is that the province is operating as near to normal as possible during the pandemic. But problems could arise for Moe if the number of COVID-19 positive cases jumps in schools, and parents in their 30s and 40s — who are swing voters — mobilize.

While the Saskatchewan Party appears to have a lock on the support of rural residents, key battlegrounds will be Regina, Saskatoon and Moose Jaw, Farney suggested.

“That’s going to be (Moe's) political challenge," he said. "Can (Moe) pitch a message that appeals to suburban voters?"

The Saskatchewan Party sprang out of a coalition in 1997 of Liberals and disgruntled Progressive Conservatives. It is largely viewed through its policy decisions as a conservative party in everything but name.

In its early years under leader Elwin Hermanson, the party had difficulty gaining ground outside rural areas and lost two elections.

It wasn't until 2007 under Wall that the party ousted the NDP from government. With Wall still at the helm, the party went on to win two more majorities in 2011 and 2016.

This story by The Canadian Press was first published Sept. 29, 2020