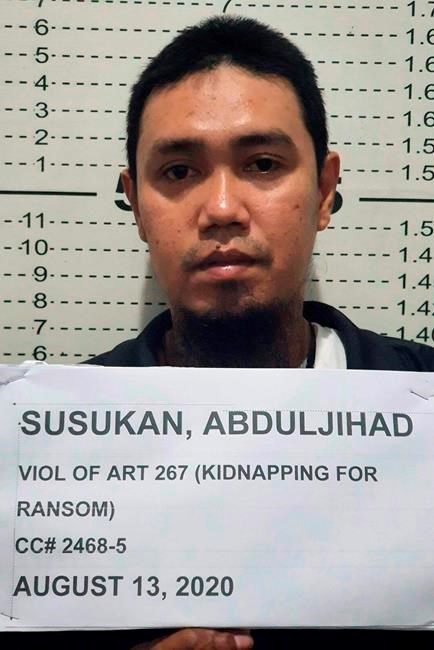 MANILA, Philippines — A leading terror suspect who has been linked to beheadings of hostages, including two Canadians and a Malaysian, has surrendered after being wounded in battle, officials said Friday.

National police chief Gen. Archie Gamboa said Thursday night that Abu Sayyaf commander Anduljihad Susukan gave up after negotiations with police in southern Davao city, where he was served warrants for at least 23 cases of murder, six for attempted murder and five for kidnapping.

He is the highest-ranking commander of the small but brutal Abu Sayyaf group to be taken into custody so far this year. The military has been waging a years-long offensive against the Abu Sayyaf, which has been blacklisted by the United States and the Philippines as a terrorist organization for past bombings, ransom kidnappings and beheadings. Many of its gunmen, mostly peasants and desperately poor villagers, have aligned themselves with the Islamic State group.

Security officials have blamed Susukan and his men for playing a role in cross-border kidnappings of tourists and other victims from the Malaysian state of Sabah on Borneo island, including a Malaysian citizen, who was beheaded by the militants in 2015 in their jungle base in southern Sulu province on the day when Malaysia's then-prime minister Najib Razak arrived in Manila to attend the Asia Pacific Economic Cooperation summit.

Susukan also helped finance the kidnappings in the south of two Canadian men, who were separately beheaded in Sulu in 2016 after the militants failed to get a huge ransom. Another Abu Sayyaf militant, Ben Yadah, murdered the two Canadians and remains at large, a military officer said.

Susukan surrendered to a Muslim rebel chief after the accidental explosion of his M203 rifle grenade in a gunbattle with troops in Sulu severed his left arm. Military officials had believed he was killed but later learned he was in the custody of Nur Misuari, who leads an armed group which signed a 1996 peace deal with the government.

Misuari flew from Jolo to Davao city on a private plane with a few companions that included Susukan on Sunday, sparking speculation he may be planning to present the terror suspect to President Rodrigo Duterte.

Duterte has been staying in his hometown in Davao city, where Misuari also has a home. Although the president has appointed Misuari as a special envoy to the Organization of Islamic Cooperation, the Muslim rebel chief has not been clearly authorized to hold talks with suspected terrorists.

“His giving himself up to Mr. Misuari is not the surrender contemplated under the law and does not make him immune from arrest,” military spokesman Maj. Gen. Edgard Arevalo said of Susukan in a statement.

Under a murky arrangement, Misuari and his rebel force have been allowed to keep their weapons in Sulu and outlying provinces under the 1996 Muslim autonomy deal in the south, homeland of minority Muslims in the largely Roman Catholic nation.

The militants beheaded the two Canadians after ransom deadlines lapsed. At the time, Prime Justin Trudeau urged governments not to pay ransom to discourage similar abductions.

John Ridsdel of Calgary and fellow Canadian Robert Hall were among four tourists kidnapped in September 2015 by Abu Sayyaf militants along with Norwegian man Kjartan Sekkingstad and Marites Flor, a woman from the Philippines.

The two Canadians, Sekkingstad, who was a permanent resident of Canada at the time, and Flor, who was Hall's girlfriend, were snatched from a marina.

Flor was freed in June 2016 and Sekkingstad was released a few months later in September.

Ridsdel was executed in April of that year and Hall was beheaded in June.

Hall was born in Calgary but lived in various parts of Western Canada. He ran a series of businesses — a small engine repair shop, a pizza stand, a home renovation company, and a consulting firm — but spent 25 years at his custom welding and fabrication business.

While sailing and travelling around the world, Hall landed in the Philippines a couple of years before his death and lived in the port city of Davao.

— With files from The Canadian Press