Trust in police questioned and whistle while you work; In The News for June 16 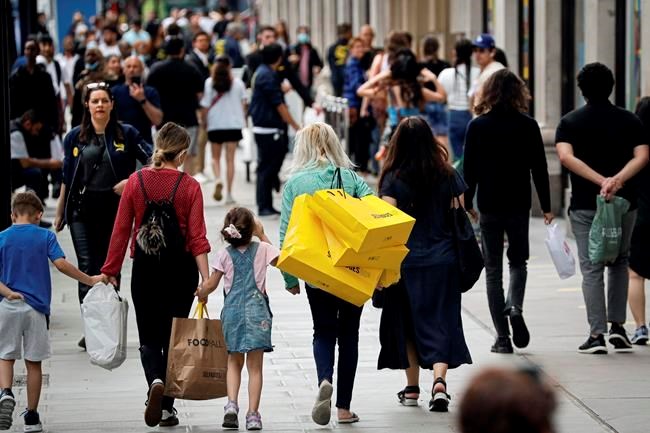 In The News is a roundup of stories from The Canadian Press designed to kickstart your day. Here is what's on the radar of our editors for the morning of June 16 ...

OTTAWA — More Canadians are questioning their trust in the police as protests against racism and police brutality sparked by the killing of George Floyd last month sweep across North America, a new poll suggests.

While the majority of Canadians remain largely trusting of their law-enforcement agencies, the Leger and Association for Canadian Studies survey shows a noticeable drop in the number who said they trusted the police somewhat or a lot in recent months.

Seventy per cent of survey respondents over the weekend indicated they trusted the police a lot or somewhat — a decline of nine percentage points from May and 11 points from April.

The decline coincides with the May 25 killing of Floyd, a Black man, by white police officers in Minneapolis, which was captured on video and has since sparked anti-racism protests in the U.S. and Canada as well as calls for changes to police conduct.

"It does signal that a percentage of Canadians are asking themselves questions about how police forces are doing their work," Leger executive vice-president Christian Bourque said of the survey results.

On that score, the poll found that 90 per cent of respondents were in favour of police wearing body cameras while 87 per cent supported providing more hours of training for officers on relations with visible minorities.

OTTAWA — The Canadian military is promising today to share its plan for getting Cyclone helicopters back in the air after a deadly crash off the coast of Greece in April.

Officials have not revealed what caused the Cyclone known as Stalker 22 to crash, killing six service members.

A preliminary report released last week said only that the helicopter did not respond as the crew expected before it went down in the Ionian Sea while coming in for a landing on HMCS Fredericton.

The investigation is now focusing on what the military has described as "aircraft systems and human factors."

The entire Cyclone fleet was put on what the military called an "operational pause" after the crash as a precaution.

At a briefing in Ottawa, military officials are to talk about how and when the pause ends.

TORONTO — Whistle while you work to help Ontario bounce back from the COVID-19 pandemic — but please, don't sing.

That's the gist of the message coming from the provincial government, which has included explicit bans on singing — even dancing — in parts of its plan to reopen businesses temporarily shuttered by the deadly outbreak.

The guidance prepared for restaurants and bars states that both singing and dancing are banned in the outdoor seating areas where customers are currently allowed to gather in limited numbers.

Documents state singing is also banned in child-care settings and discouraged in places of worship that were given the green light to open their doors across Ontario last week.

The provincial ministry of health says the anti-crooning commandments are rooted in science, and doctors with expertise in the matter agree.

"It's gross to think about, but every time we talk, we're spitting into the world around us," said Dr. Isaac Bogoch, an infectious disease physician and scientist with the Toronto General Hospital.

"And if we're singing, shouting or breathing heavily, we're likely expelling more saliva and nasal secretions ... and if someone's infected, then those secretions will shed more virus."

NEW YORK — Commissioner Rob Manfred says there might be no major league season after a breakdown in talks between teams and the union on how to split up money in a season delayed by the coronavirus pandemic. The league also said several players have tested positive for COVID-19.

These were just the latest escalating volleys in a sport viewing disagreements over starting the season as a preliminary battle ahead of bargaining to replace the contract that expires on Dec. 1, 2021.

"It's just a disaster for our game, absolutely no question about it," Manfred said during an appearance on ESPN that included the heads of the other major U.S. professional leagues. "It shouldn't be happening, and it's important that we find a way to get past it and get the game back on the field for the benefit of our fans."

Spring training was stopped because of the pandemic on March 12, two weeks before opening day, and the sides reached an agreement on March 26 on how to revise their deal to account for the virus.

Since then, the hostility has escalated to 1990s levels as the sides exchanged offers. MLB claims teams can't afford to play without fans and pay the prorated salaries called for in the March deal, which included a provision for "good-faith" negotiations over the possibility of games in empty ballparks or neutral sites.

People queue outside shops in England...

Long lines stretched along streets across England as shops selling items considered as nonessential during the coronavirus pandemic, such as sneakers and toys, welcomed customers on Monday for the first time since the U.K. was put into lockdown in late March.

Starved of the retail experience for the best part of three months, shoppers generally appeared to abide by the social distancing requirement to stay two meters (6-1/2 feet) apart as they awaited their turn to enter the stores.

Not everywhere, though — pushing and shoving was evident at the NikeTown store on Oxford Street, London's world-famous shopping mecca, at its reopening.

For friends Dionne Sumner and Olivia Copeland, both 25, it was a far more orderly experience when they waited to get into their local budget clothes retailer Primark in Liverpool. Arriving at the store at 8:30 a.m., they queued for about 15 minutes before getting in.

"This has been planned, we've been really missing it," Copeland said after spending more than 200 pounds ($250). "It is nice to get back out, it's better than being stuck in the house."

Monday's reopening of shops, from department stores to booksellers and electronic retailers, only applies to England. Scotland and Wales are taking a more tentative approach to the easing of the coronavirus restrictions. Northern Ireland's stores reopened last week. England also saw zoos, safari parks and drive-in cinemas reopen on Monday.

For the fourth time in its history, the Oscars are being postponed. The Academy of Motion Picture Arts and Sciences and the ABC Television Network said Monday that the 93rd Academy Awards will now be held April 25, 2021, eight weeks later than originally planned because of the pandemic's effects on the movie industry.

The Academy's Board of Governors also decided to extend the eligibility window beyond the calendar year to Feb. 28, 2021, for feature films, and delay the opening of the Academy Museum of Motion Pictures from December until April 30, 2021.

"Our hope, in extending the eligibility period and our Awards date, is to provide the flexibility filmmakers need to finish and release their films without being penalized for something beyond anyone's control," said Academy President David Rubin and Academy CEO Dawn Hudson in a joint statement.

Karey Burke, the president of ABC Entertainment, added: "We find ourselves in uncharted territory this year and will continue to work with our partners at the Academy to ensure next year's show is a safe and celebratory event."

The 12th annual Governors Awards has also been . The event, in which honorary Oscars are bestowed to previously announced recipients, is generally held in Los Angeles during the second week of November. The untelevised event is a major gathering for many of the year's awards hopefuls.