Canada beats New Zealand 2-0, qualifies for round of 16 at Women's World Cup 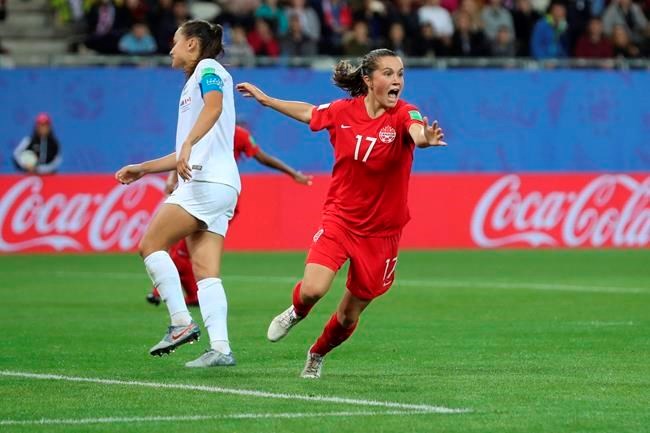 GRENOBLE, France — Two wins in as many games for Canada at the Women's World Cup. And coach Kenneth Heiner-Moller sees even better things ahead.

"I'm very happy for the win but I know this team has got more," the Dane said after Saturday's 2-0 victory over New Zealand moved his team into the round of 16. "It's like you're hungry and you're eating a little bit but you're still hungry. I know this team can do so much more."

After dispatching No. 46 Cameroon 1-0 and 19th-ranked New Zealand, fifth-ranked Canada now heads 600 kilometres north to Reims where it will face the eighth-ranked Netherlands on Thursday to decide who tops Group E.

The two teams are tied on points and goal difference. The European champion Dutch beat winless Cameroon 3-1 earlier Saturday at Valenciennes to also advance to the knockout stage.

The Netherlands offer a step up in class, with Heiner-Moller noting the Dutch have "more experience, more confidence and with players playing in the bigger leagues in Europe."

Finishing first in the group sets up a round-of-16 date against the runner-up in Group D — England or Japan, who face off Wednesday. Placing second means a date with the Group F runner-up, likely Sweden unless the U.S. stumbles.

Heiner-Moller said he has no preference.

"We took two steps forward. Hopefully we'll take a third one. And then we'll play whoever we're going to play."

England, France, Germany and Italy have also booked their ticket to the knockout stage, making Canada the first non-European side to advance.

As in the opener against Cameroon, goals proved hard to come by initially Saturday for the Canadians despite dominating play.

Jessie Fleming and Nichelle Prince each opened their World Cup account with goals in the second half as Canada wore down New Zealand. Captain Christine Sinclair, in search of goal No. 182, could have had a hat trick, hitting the woodwork twice and firing high another time but ended up setting up Prince's goal.

Before the game, a former World Cup coach described the Kiwis as a team a cut below the Canadians but one who could give you trouble. The Football Ferns, who upset No. 3 England in a pre-tournament warmup, never got out of first gear, however.

New Zealand coach Tom Sermanni, a former assistant coach with Canada during the 2015 World Cup, paid tribute to the Canadians "slick" ball movement and excellent chemistry. But he was not happy with his team's performance.

It didn't help that his team lost defender CJ Bott to a possible broken wrist early in the 18th minute after a Janine Beckie ball smashed her lower arm from close-range. It was another costly blow for a team that saw defender Meikayla Moore go down with a ruptured Achilles tendon on the eve of the tournament.

In a planned move, Heiner-Moller switched from a 4-3-3 to a 3-5-2 formation in the first 15 minutes, widening the attack. Canada controlled the game but managed just one quality scoring chance in the opening half.

A minute after Bott was helped off, Sinclair's header off a flick-on from a corner rattled off the crossbar. The ball went to Kadeisha Buchanan whose header hit a defender as the game of aerial ping-pong continued.

Stephanie Labbe had to make an important interjection in the 39th minute, punching away a cross on a rare New Zealand counter-attack.

The Canadians controlled the first half, essentially playing keepaway with New Zealand. But 73 per cent possession in the first 45 minutes did not produce a goal as Canada outshot the Football Ferns 8-1 (2-0 in shots on target).

"(It was) frustrating that first half. We dominated  but just weren't able to put one in," said Sinclair. "Then Kenneth came in at halftime and said the work that we'd put in in that first half will earn us goals in the second half. And it happened.

"It's hard to keep that up for 90 minutes defensively."

Canada came out with purpose in the second half, with a 14-pass sequence off the kickoff that led to a Beckie shot over the bar.

The breakthrough came in the 48th minute. A probing long ball from Beckie found Prince down the left flank and the speedy forward outraced two defenders before squaring the ball for the 21-year-old Fleming to slot in her ninth goal in 68 appearances.

Sinclair almost made it 2-0 soon after, but her redirect from in front went high. And Sinclair fed the 24-year-old Prince in the 72nd minute, only to have her header acrobatically steered away by goalkeeper Erin Nayler in a marvellous one-handed save.

Prince made it 2-0 in the 79th minute, poking a rebound home from close-range after Sinclair's header hit the goalpost. It was her 11th goal for Canada.

"I thought we played some brilliant football and gave them nothing," said Schmidt.

Canada is now unbeaten in 10 games (7-0-3) in 2019, one game off the team record. The run includes nine shutouts with the Canadians outscoring the opposition 11-1.

Heiner-Moller's team has not lost since a 2-0 defeat at the hands of the top-ranked U.S. in the CONCACAF Women's Championship last October. Canada also extended its shutout streak to 423 minutes, dating back to a 2-1 friendly win over Nigeria on April 8.

For New Zealand, in its fifth World Cup, the wait for a first tournament win continues with a record of 0-11-3. The Kiwis lost their tournament opener to the Dutch on a stoppage-time goal.

The Canadian women have never before opened the World Cup with two straight wins. And they had never beaten a confederation champion (New Zealand is the big fish among the Oceania minnows) at the tournament.

Heiner-Moller made one change to the team that started against Cameroon in Montpellier on Monday. Jayde Riviere, an 18-year-old making just her second start and sixth appearance, came in at fullback for Allysha Chapman.

Riviere, who did not look out of place, gave way to Chapman with 15 minutes remaining. Heiner-Moller said Chapman did not get the start because they wanted to give her some rest.

Grenoble was hit hard by thunder and lightning during the afternoon but the skies cleared for the 9 p.m. kickoff.

The 20,000-capacity Stade des Alpes, with its low roof, proved to be a boombox nestled at the foot of the mountains. The crowd, announced at 14,856, was roaring before the players took the field.

The match saw Sinclair surpass the 23,000-minute mark for Canada. She started the day at 22,950 minutes.

The win raised Canada's career record against New Zealand to 7-1-4 record, with the lone loss coming in their first meeting in 1987. The two teams tied 0-0 the last time they met — in group play in Edmonton at the last World Cup in a game temporarily halted in the first half due to lightning concerns.