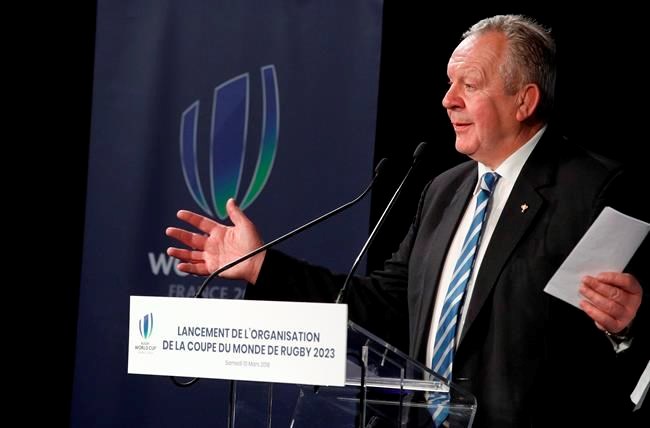 Rugby Canada has cast its vote for incumbent chairman Bill Beaumont in the World Rugby elections.

Beaumont has faced a stiff challenge from current vice-chairman Agustin Pichot in the race to oversee the world governing body of rugby.

Voting started Monday and closed Thursday with results originally to be released May 12 at the World Rugby Council's annual meeting, to be held by teleconference. But on Friday, World Rugby said the winner would be announced Saturday.

The elections are decided by the World Rugby Council, which has a total of 50 votes. Some unions, like England, South Africa and New Zealand, have three votes while Canada and the U.S. have one vote apiece.

Rugby Canada chair Tim Powers said the Rugby Canada board and CEO Allen Vansen had talked to both candidates and reviewed their platforms with the organization's performance leadership group.

"There were strong opinions for the merits of both candidates within our group," Powers said in a statement. "There was general agreement that there is a need for change within World Rugby in terms of investment in Tier 2/emerging nations, in a commitment to advancing the women's game further — particularly at the high-performance level and a need to update World Rugby's governance structure.

"The current global situation with COVID-19 also highlighted the need for stability during this challenging and uncertain time."

"We believe Mr. Beaumont will bring a commitment to progress in our areas of concern, while also offering the stability required to see the world game through this challenging time."

Beaumont and Pichot ran unopposed for their current positions in 2016.

The 45-year-old Pichot is a former Argentina captain who ran on a platform of change.

The 68-year-old Beaumont, who served as vice-chairman from 2007 to 2012, is a former England captain and British and Irish Lion who led England in 1980 to its first Grand Slam for 33 years.

The role of vice-chairman and seven seats on the world governing body's powerful executive committee are also up for grabs. The positions are all for a period of four years.

Controversy over the Fiji Rugby Union chairman, who withdrew his candidacy for the executive committee in the aftermath of allegations of discriminatory conduct, was a major campaign storyline.

The Fiji Rugby Union is investigating allegations against Ratu Vilikesa Bulewa Francis Kean that were published in Britain's Sunday Times. The Times reported it had heard "graphic recordings'' of Kean using violent and homophobic language when in charge of Fiji's prison service.

World Rugby said previously that while any allegations "must be validated,'' it was `"in the best interests of the sport'' that Kean step down from the World Rugby Council and withdraw his executive committee candidacy. Fiji's seat on the Council will be filled by union CEO John O'Connor.

Beaumont's nomination for re-election was proposed by the French Rugby Federation and seconded by the Fijian union.

Kean's nomination for a place on the executive committee was seconded by the French Rugby Federation, whose head is Bernard Laporte — Beaumont's running partner to become World Rugby vice-chairman.

The race for chairman is the only one that carries any drama since Laporte ran unopposed for vice-chairman and Kean's withdrawal meant there were seven candidate running for the seven executive committee jobs.

New Zealand, with SANZAAR partners Australia, South Africa and Argentina, support Pichot. However, Beaumont is believed to have the support of the Six Nations group: England, Ireland, Scotland, Wales, Italy and France.

While Beaumont was favoured to collect the 26 votes he needs to remain chairman, Pichot is believed to have made the race close.