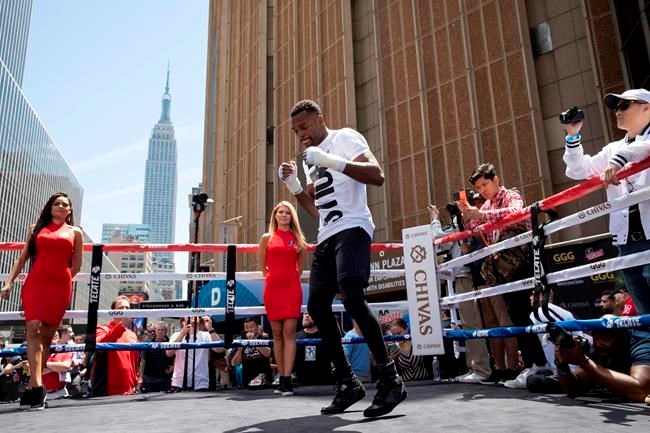 Undefeated Canadian boxer Steve Rolls is ready for the biggest fight of his life.

The USBA middleweight champion (19-0) will battle Gennady Golovkin of Kazkahstan (38-1-1) on Saturday in the headline bout at Madison Square Garden in New York.

For the 35-year-old Rolls, it was a surreal moment when he found out he was fighting the boxer dubbed "GGG."

"Oh man, it was amazing," said Rolls, who was raised in Chatham, Ont. "When I got the call from my manager, I was out on a late-night run. He asked me if I wanted to fight GGG and it was an immediate yes for me. I have been working so hard for an opportunity like this."

Golovkin is coming off of his first defeat of his career, losing to Canelo Alvarez last September in Las Vegas. Regardless, Rolls understands what a win here would do for his career.

"I think it would be humongous and epic for Canadian boxing. We have tremendous talent in this country," he said. "I feel this will be amazing for Canadian boxing and it will inspire young boxers to show that this is possible. For my career, it takes me to the level that I have been working so hard to get to — to be in top fights like this."

Rolls' last fight was a win over KeAndrae Leatherwood for the vacant USBA middleweight title last December at the Coca-Cola Coliseum in Toronto.

Rolls is considered a huge underdog against Golovkin, but he's using that as motivation.

"Whatever the reason is for why he picked me, it is going to be a tough fight. Some people say it is a tune-up, but I don't play into it. This is not going to be a tune-up fight, this will be a real fight and I give all the respect in the world to GGG," Rolls said.

"He had the option of picking whoever and I respect that he is giving me this opportunity. I think it is a much better fight than people think. I'm not too well known outside of Canada but I think a lot of people are going to be surprised. I think the people that tune in are going to say, 'Wow this is not what I expected.'"

For Rolls to upset Golovkin, he knows he has to follow his game plan. After studying him in training camp, the Canadian sees holes in his game that he is ready to exploit.

“There are a few things that I plan on doing, a couple of game plans we have. But, at the end of the day, I have the ability to adapt in there, you need that ability in fighting a guy like GGG. We see some things that I have the advantage in so we will see if it is available on fight night."

Rolls believes he has the cardio and endurance to go all 12 rounds if needed. He has gone to the scorecards nine times in his career.

The experience man, he has gone 12 rounds more than I have," Rolls said. "He has the stamina to do 12 rounds strong. It is very important to be ready physically and mentally for this fight."

Although Golovkin doesn't hold any belts, Rolls knows this fight is huge for his career.

"Belt or not, GGG symbolizes a champion," Rolls said.