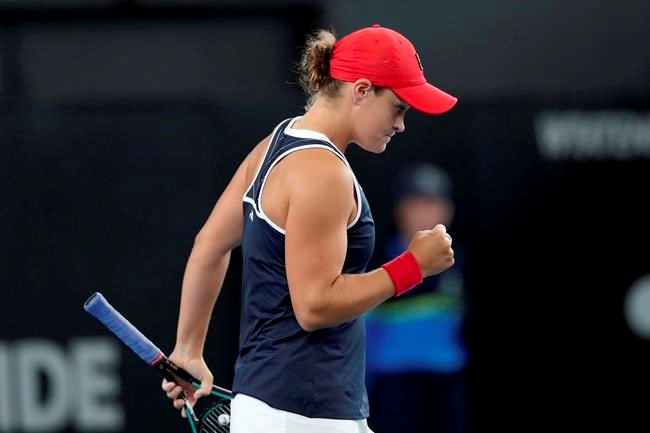 ADELAIDE, Australia — Canada's Felix Auger-Aliassime lost a tight semifinal against a red-hot opponent on Friday at the Adelaide International.

Rublev saved nine of 10 break points and finally prevailed in just under three hours at the Australian Open tuneup event.

Auger-Aliassime, 19, fell just short of joining Alexander Zverev as only the second player since 2008 to reach four ATP Tour finals as a teenager.

The Canadian, ranked 22nd in the world, saved eight of 10 break points and also fought off two match points in the second set.

But Auger-Aliassime lost a key game on serve to go down 5-4 in the third set. Rublev then served out the match.

Rublev, who will face South African Lloyd Harris in the final, is the first player since 2004 to reach back-to-back finals in the first two weeks of the season.

Meanwhile, Canadian Gabriela Dabrowski fell to a familiar foe in her quest for a 10th career WTA doubles title.

The 27 year old from Ottawa, alongside Croatia's Darija Jurak, lost to her former playing partner Yifan Xu and Nicole Melichar 2-6, 7-5, 10-5 in the women's doubles final.

Dabrowski and Jurak appeared poised to close it out, up 5-3 in the second set. However, Xu and Melichar managed to save two match points en route to winning four straight games to force a super tiebreaker — that they would win to secure the title.

Just a few months back, Dabrowski and Xu concluded a three-year partnership after playing in their second career WTA Finals.

In their first tournament as partners in 2017, the Canadian-Chinese pair won the Miami Open — one of five career doubles titles they accrued as a team.

Despite failing to win the title at the All-England Club, Dabrowski still became the first Canadian to play in a Grand Slam women’s doubles final since Jill Hetherington did it over 30 years ago (lost in 1989 Australian Open final).

The Ottawa native is expected to play doubles with Latvia's Jelena Ostapenko at the upcoming Australian Open. Dabrowski and Ostapenko won the Qatar Open in February 2018 in their fourth tournament as a pairing. Ostapenko was a late substitute for Xu, who was nursing a back injury at the time.

Dabrowski will also play mixed doubles in Melbourne with Croatian Mate Pavic. The pair has played plenty of Grand Slams together — including a championship run during the 2018 Australian Open.

Collins was bothered by a back injury in the final set. She received treatment and was able to continue.

"It was probably my first real taste (this year) of some adrenaline late in matches," Barty said. "And that is what we're after, to try and practice those things as best we can. I felt like I did what I wanted to do well tonight and got over the line."

Barty beat Yastremska in their only previous meeting last year in Miami.

"I had a good preseason, I worked on a lot of things and I think that's paying off ... each game, I'm playing better and better," Yastremska said.

— With files from The Associated Press

This report by The Canadian Press was first published Jan. 16, 2020.

Race for championship round tightens at Tournament of Hearts
Feb 18, 2020 9:28 PM