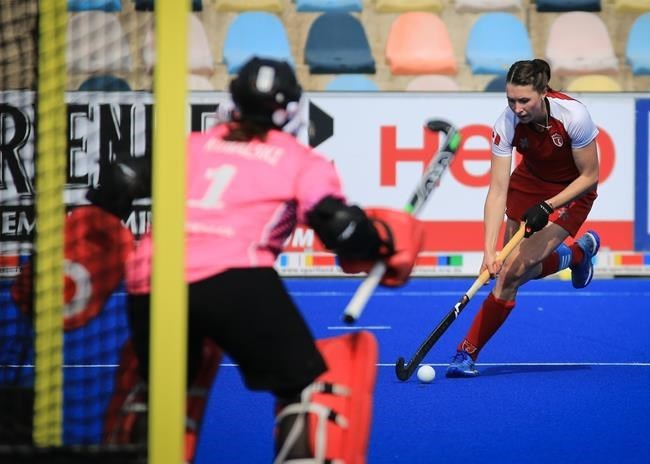 Most everyone agrees that the Canadian women's field hockey team has blossomed under coach Giles Bonnet.

The Canadian women, ranked 21st in the world, finished a record fifth at the Commonwealth Games in Australia in April 2018 and has posted wins over nine higher-ranked teams since the start of 2018 when Bonnet was named interim coach.

So why has Field Hockey Canada given the South African his notice?

"Unfortunately as an organization we've had to make some difficult choices based on our financial reality," said Susan Ahrens, named Field Hockey Canada's CEO in March after two months as interim CEO.

Bonnet's staff position will end after this summer's Pan American Games. Ahrens says the organization is trying to work out a way to retain him on a contract status.

If it doesn't, the Canadian women could be facing the most important matches of their career without their coach — with a possible Olympic qualifying playoff later this year. The women have sat out the last six Olympics, last competing in 1992 when they finished seventh in Barcelona.

Captain Kate Wright (nee Gillis) says the team was told in February that it would have to finance itself to continue the program, which "going into an Olympic year ... is pretty devastating."

Two weeks later, they learned Bonnet had been given his termination notice.

"That to us was quite shocking, as you can imagine," said the Kingston-born Wright, who has won 200-plus caps for Canada.

"We've been trying to work with Field Hockey Canada to get on the same page, but unfortunately we're struggling with that," she added. "As a team we've become self-sufficient."

That means fundraising and paying to play. The women have essentially hived themselves off from their governing body.

"It's quite crazy to us that we would come this close to qualifying and not have a coach to take us there," she added.

They have asked Field Hockey Canada to keep Bonnet on until Olympic qualification is done. If that doesn't work, they may have to find the money to pay him themselves.

Bonnet, 53, downplays his lame-duck position. He says he and the women's team are focused on ending the Olympic drought.

"What's important is to attempt ... to qualify for Tokyo, for the Olympics," said Bonnet, who took over as full-time coach in May 2018.

Bonnet speaks enthusiastically about the Canadian women's athleticism, loyalty and commitment. But he is blunt about making the 12-team Tokyo field, with host Japan already assured of a spot.

But he believes in his team.

"It's a fantastic group," he added. "I think the potential of this team is quite remarkable."

The squad, which relocated to Belgium last year, is spending some rare time on Canadian soil this week. The team is gearing up in Victoria for the 2019 Hockey Series Final, which opens June 19 in Valencia, Spain. A top-two finish there will lead to a subsequent playoff with Olympic qualification on the line.

The winner of the Pan American Games, which open in July 26 in Lima, Peru, will also head to the 2020 Tokyo Games. But that competition features No. 4 Argentina, the 12th-ranked Americans and No. 16 Chile.

Bonnet says the Spain tournament may be the easier road but adds: "It will be difficult for us. It's been a long time since we played in a tournament where there's that much at stake."

They had received $2,150,000 in the Rio quadrennial when they were centralized in Vancouver.

That means the women are back to a pay-to-play model while they attempt to climb the rankings ladder. They have raised $81,000 — on a goal of $75,000 — via crowdfunding to finance the trip to Spain.

A private donor is paying for the women's week-long camp in Victoria, Ahrens said.

Ahrens, a former coach and Scottish international player, had previously served as Field Hockey Canada's director of hockey development. Asked if she had known the extent of the financial hardships that awaited when she took over as CEO, she laughed and said "No."

Wright, 29, says the women hope making the Olympics will change their financial fortunes.

"With an Olympic berth, a lot of good things come. Not only for the players and the team but the support around the team. And that's what we're looking to do. We know it's not sustainable for us as players to continue this way — paying to go on tour, paying our coach's salary and that sort of thing."

Following a strategy Bonnet had used with other national teams he has coached, the Canadian women moved to Belgium last September to join club teams there. It gave them access to elite coaches and trainers while allowing the Amsterdam-based Bonnet to work with them regularly.

The move to uproot their lives was voluntary but 21 took him up on it.

"We are effectively outsourcing our cost to be in Europe, to the clubs in Belgium," Bonnet said, noting it would cost $50,000 to hold a one-week camp in Ireland, for example.

The Canadian women get accommodation, some transportation help and are paid a modest amount by their European clubs — partly to play and partly to coach youth teams. They also get Sport Canada's carding stipend.

The move allows the women to play more, both in club and international matches.

"We're pretty excited about were we are right now," said Wright. "The team is in a different place, I'd say. We've really used our time together in Belgium to move to the next level. And if that's the commitment we're willing to do what it takes."

It makes for a gruelling schedule, training with Canada five times a week in addition to club games, practices and youth coaching duties.

Wright's husband, Philip, also represented Canada in field hockey so understands his wife's Olympic dream. "He totally gets it which is a huge help," said Kate, adding the separation is "not easy."

"We have an athletic team but we need to acquire skills," said Bonnet, who also has international coaching experience with Belgium, China and South Africa.

He also singles out the team's support group — friends, family and others — for their help. What he doesn't say is some of those are clearly tired of banging their heads against Field Hockey Canada.

But while electing to stay away from the issue of governance in an interview, Bonnet was far more candid in a conversation earlier this year with the Belgian podcast Studio Hockey, saying Canada had "followed a very poor strategy in terms of their field hockey over a decade."

An injection of money from 94 Forward — an organization created as a legacy from the 1994 Commonwealth Games in Victoria that provides funding to high-performance sport in the Victoria area — financed a three-week women's training camp in China in January that included six test matches.

But the women paid for a May tour of Scotland with Wright contributing 730 Euros (C$1,100). Canada posted five straight wins against the 18th-ranked Scots with a 20-4 edge in scoring.

Ahrens says she hopes 94 Forward will continue its support. An organization spokesman, however, says the situation is under review in the wake of the decision to give Bonnet his notice.

It's a bizarre situation. Field Hockey Canada says it can't afford the coach, But in letting him go, it appears to be closing the door on much-needed funding.

There has been a movement over the last few years to make Victoria the team's permanent home in partnership with the University of Victoria. That could well lead to more 94 Forward support.

Ahrens acknowledges that while the move to Europe has accelerated the women's progress, it is not a sustainable model to help grow the sport at home.

"Maybe in one year out of the four-year quadrennial plan playing in European leagues is part of that but not the norm," she said.

"The reality of our organization is we do need to build now and build our system to be able to support these top players in the future in a far better way and a far more sustainable way so we are not relying on Own The Podium and government funding," she added.

She points to under-17 and under-21 tours to the Netherlands and Ireland, respectively as evidence of a next-generation blueprint.

Asked about the disconnect with some of the women's team supporters, Ahrens says: "I think there's frustrations on all sides. There's such high stakes that I can completely understand the perspective."

She says Field Hockey Canada has "made significant strides" with its infrastructure, is changing its "financial practices" and has moved to make it easier for supporters to donate via online portals.

"We're busy. I get it that it doesn't necessarily help this year when it's really needed. But we're truly busy building the strategic plan, the community engagement to get a system that will be sustainable in the future. And we're doing everything we can to support both teams this year."

Bonnet, while choosing to stay away from the politics of his position, says there has been change in the last six months at Field Hockey Canada with officials working hard to "help create a very positive environment."

Ahrens says she is "hugely confident" in the women's team ahead of the all-important tournament in Spain.

"They're an extremely focused and self-driven group with a very firm goal in mind. I'm a hundred per cent certain that they will finish in the top two in Valencia."

Such a finish would result in a two-game playoff in late October or early November with the winner advancing to Tokyo. Because of Canada's ranking it would play the two games on the road. Ahrens expects the playoff opposition will likely be ranked fifth through eighth.

"High stakes but they couldn't be better positioned. They're used to being overseas, they're used to playing abroad now ... Nothing's easy but it's a route that they can still go into with an element of confidence. It's a real possibility because they've shown they can get results against top teams."

The Canadian men are heading to their own playoff after winning the FIH Series Finals in May with a 3-2 victory over host Malaysia, ranked 13th. They can also qualify via the Pan American Games although Olympic champion Argentina, currently ranked fourth, stands in their way.

Own The Podium money helped pay for the men's trip to Malaysia.

The men will host their playoff qualifier, likely against a team ranked 14th through 16th, at their West Vancouver training base.

For more information on the woman's field hockey team, visit fhc_wnt on Instagram or @CanWolfpack on Facebook