Coach John Herdman says Canada up for showdown with U.S. in Toronto 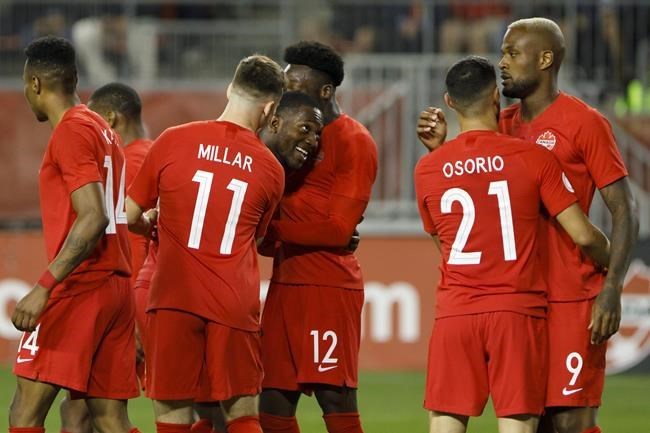 TORONTO — Coach John Herdman says Canada's upcoming CONCACAF Nations League match against the United States will come down to who wants it more.

And he suggested his young Canadian team is ready for its closeup.

"It's going to come down to the will to get the job done," he said Wednesday before training. "This group has got the belief. I think they feel they've got the talent there as well to get a result and put the performance on.

"But it'll come down to that will and the will to get the job done ... I think it will come down to who wants it more. I've got a feeling that our boys will just leave it all out there. And there's nothing better than a football match like that."

Herdman clearly likes what he sees when he surveys his team, citing his players' passion, energy and talent.

"It's all coming together," he said. "We're just waiting for that moment where we step forward, and we silence the critics. But also we ignite those that really want to see this team do well."

On paper, the Americans will enter Tuesday's game at BMO Field as favourites.

They are ranked 21st in the world, compared to No. 75 for Canada. And the Canadian men, while holding an all-time record of 8-11-14 against the U.S., have not beaten the Americans since March 1985.

The Canadians are 0-9-8 since then and have been outscored 17-1 in the last 11 matches. On the plus side, two of the last three meetings have been 0-0 draws with the U.S. winning the other match 1-0.

The two teams will meet again Nov. 15 in Orlando. The U.S. plays Cuba on Friday in their first outing in CONCACAF Nations League Group A play. Canada has already beaten No. 178 Cuba twice.

The winner of Group A will advance to the final four of the tournament next June.

The Canadians are looking for the valuable FIFA ranking points that would accompany a victory over the Americans. Canada, currently ranked seventh among CONCACAF countries, is looking to crack the top six in the rankings after the June international window so as to make the six-country Hex round of World Cup qualifying, the most direct route out of CONCACAF.

"This is massive for us," Herdman said of the U.S. game.

Canada currently trails El Salvador by five ranking points in the race for sixth spot in the region, which covers North and Central America and the Caribbean.

Depending on how the U.S. does against Cuba, a Canada win over the Americans could be worth 17 or 18 rankings points.

The only change to the Canadian roster is Toronto FC's Liam Fraser replacing Orlando City's Will Johnson, who was unable due to family reasons.

Defender Doneil Henry is here but is unavailable to play after being red-carded last time out against Cuba. Midfielder Stephen Eustaquio is returning from a knee injury, so will have his workload managed in his first senior camp.

"Everyone else is just raring to go," added Herdman.

He acknowledged the extent of the U.S. challenge, saying No. 12 Mexico and No. 86 Haiti had previously been Canada's biggest foes under his management. Canada lost both of those encounters at the Gold Cup, 3-1 to Mexico and 3-2 to Haiti after blowing a 2-0 lead.

"This is building on those learnings," said Herdman.

"We're battle-hardened coming into this (match)," he added. "We've got a few more scars and you need those things."

Herdman says his players see the Americans as standing in their way on the road to the 2022 World Cup. Canada, the U.S. and Mexico are co-hosting the 2026 tournament.

Focus in camp will be the commitment to defence, he said.

"We know we can score, but keep the clean sheet as well. And defend properly."

The U.S. will be without striker Jozy Altidore, who injured his quad in Toronto FC's 1-0 win over Columbus on Sunday.

This report by The Canadian Press was first published Oct. 9, 2019.