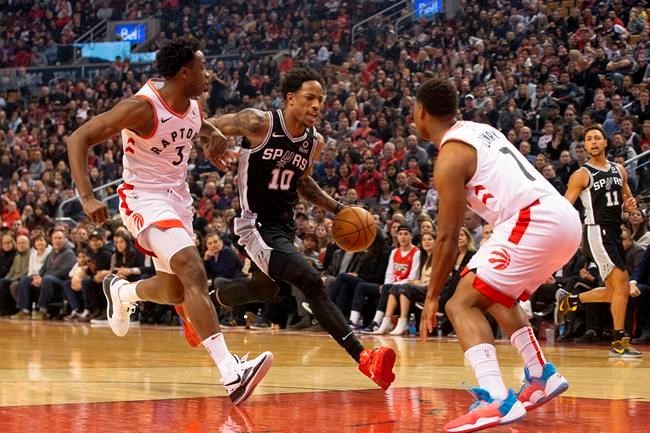 TORONTO — Pascal Siakam was mid-sentence, speaking to the media in Toronto's post-game locker-room Sunday, when DeMar DeRozan rushed in and wrapped Siakam in a big bear hug.

DeRozan had just played spoiler in Siakam's return from injury — and exacted a bit of revenge against his old team. The 30-year-old scored 22 of his 25 points in the second half to lift San Antonio to a 105-104 victory over the Raptors, his team for nine seasons before he was traded to the Spurs in the 2018 off-season for Kawhi Leonard.

"It says a lot especially against a great team," DeRozan said of the Spurs' comeback win.

Serge Ibaka had 21 points and 14 rebounds to top Toronto (25-14), becoming the third Raptor in history to record a double-double in eight straight games, along with Chris Bosh and Donyell Marshall.

Normal Powell, who returned after sitting 11 games with a shoulder injury, finished with 20 points, while Siakam, who'd been sidelined with a groin injury for 11 games, had 15 points and scored the game's first basket just 47 seconds in when he posted up DeRozan.

The Raptors are still missing Marc Gasol — who wore a T-shirt that read "There is no planet B" — and Fred VanVleet. Both are out with hamstring injuries.

The Raptors led for most of the night, and had cobbled together an 18-point advantage by midway through an entertaining third quarter that saw Kyle Lowry and Derrick White go crashing out of bounds battling for a loose ball. Lowry landed inches from his young son, and gave his son a quick kiss before running back onto the court.

The Raptors led 82-69 to start the fourth, but it was virtually downhill from that point.

A pair of DeRozan free throws capped a 21-5 Spurs run that gave San Antonio a three-point lead with 5:31 to play. The Spurs would go up by nine before Lowry, Powell and Ibaka responded with back-to-back-to-back three-pointers to tie the game with 1:17 to play, whipping the Scotiabank Arena crowd into a frenzy.

But Marco Belinelli knocked down an open three with 28 seconds left, Siakam missed on a layup, then DeRozan sprinted downcourt chased by Lowry, who fouled his friend and old backcourt partner. DeRozan connected on his two free throws, but Lowry drained a long three with four seconds left to cut the Spurs' lead to a point. LaMarcus Aldridge breathed a bit of hope into the Raptors when he missed two free throws, but there were no last-second heroics as Siakam's long shot at the buzzer bounced off the glass.

DeRozan arrived in Toronto playing some of the best basketball of his career — he'd scored 20-plus points in each of his 10 previous games, becoming the first Spurs player in history to do so.

It took him until 1:25 left in the first half to score on Sunday.

"You always want to start off fast, but they threw a different look at me that no one threw this year, kind of corralling me, trapping me, so it's kind of like Floyd Mayweather: first couple of rounds you feel it out and attack after that," DeRozan said.

It was his second game in Toronto since the blockbuster trade that also sent Jakob Poeltl to the Spurs. The Raptors beat San Antonio 120-117 last February in Toronto when Leonard stole the ball from DeRozan and scored on a go-ahead dunk. Leonard drained two free throws in the dying seconds while the Toronto crowd chanted "M-V-P!"

"I don't know anybody who gets two tributes in a row. Find somebody else," DeRozan joked. "It's amazing to be able to get that much recognition. It never gets old."

DeRozan's teammates were happy for him.

"He's a great teammate, man," Aldridge said. "He's very unselfish, he wants to win, plays the right way. I was happy to see them give him that video (tribute) again because I feel like he definitely played his heart out, he gave everything he could to this city and I think he honestly deserves it. To come back here, play great and get a win, it just feels good."

Siakam was clearly happy to be back on the floor, smiling widely when introduced in the Raptors starting lineup. He then went to work, connecting on his first four shots for nine points before the game was five minutes old. His three-pointer put the Raptors up by 12 midway through the quarter. Toronto took a 28-21 advantage into the second.

"I feel like I kind of lost my rhythm a little bit," Siakam said on his second half. "I wasn't able to get back into it. It's just going to take a little bit, I'm sure. . . I felt I could have been way more aggressive."

Powell's three midway through the second saw Toronto go back up by 12, and the Raptors went into the halftime break up 51-43.

Toronto shot just 32 per cent from long distance in the first half, but San Antonio was even worse at 20 per cent.

The Raptors head to Oklahoma City on Wednesday then return home to host Washington on Friday.

This report by The Canadian Press was first published Jan. 12, 2020.