EPL steps up plans to restart in neutral stadiums in June 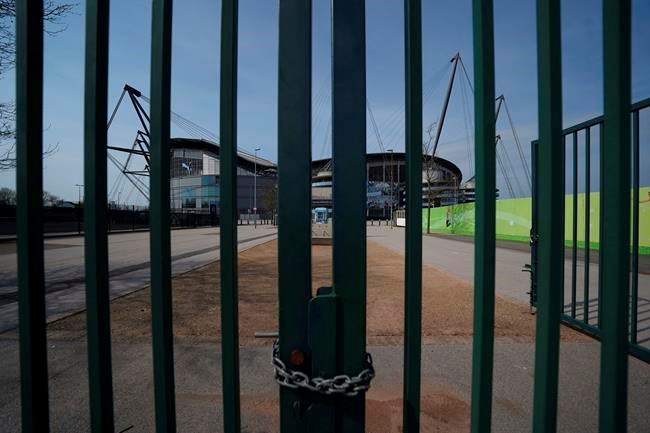 The English Premier League stepped up planning on Friday to try to resume in neutral stadiums, holding separate talks with the government and its clubs to determine the necessary health measures and logistics.

During a conference call, the 20 clubs were said by the league to have expressed a determination to complete the season that has been suspended for almost two months during the pandemic.

But club executives were informed by the league that safety certificates were likely to be granted for only eight to 10 stadiums and no team would be able to play at home to prevent fans congregating outside. “Project Restart” has June 8 as the potential earliest date for games.

It means if Liverpool's 30-year title drought ends — the team has a 25-point lead with nine games remaining — it will not happen in front of its own fans or at its Anfield stadium.

The league scheduled another all-clubs call next Friday, the day after the national lockdown currently expires and an exit strategy is due to be revealed that could pave the way to the government allowing sports to restart.

Decisions by the Dutch and French governments over the last week led to their soccer seasons ending. But British Culture Secretary Oliver Dowden said after talks with the Premier League and other sports that he was working on plans that deliver for Britons who “desperately want sport back on.”

Some footballers returned to club training grounds this week for individual fitness work but group sessions could take place again only if strict social distancing is relaxed. That would require the Premier League to source tens of thousands of COVID-19 tests so players and coaches can be regularly checked around training and games.

Concerns about how a return to training could spread coronavirus infections were underscored on Friday night when Cologne reported three positive COVID-19 cases after tests on Thursday on the players, coaching team and backroom staff. They were asymptomatic and the virus was detected due only to regular testing.

Only the trio will go into 14 days of quarantine, while training that resumed almost a month ago will continue.

The Bundesliga is hoping to resume this month, while the Premier League is further behind in its planning. Britain has the second highest known coronavirus death toll in Europe after Italy, with 27,510 fatalities.

The Premier League is aware that staging games cannot pose a significant burden on police and medical resources that are already stretched across the country dealing with the pandemic.

“The league and clubs are considering the first tentative moves forward and will only return to training and playing with government guidance, under expert medical advice and after consultation with players and managers,” the Premier League said in a statement. “The league welcomed the creation of the government medical working group for a return of elite sport, which met for the first time this morning.”

Dowden, who oversees sports in the government, confirmed on Twitter that they were planning "for a safe return of elite sport behind closed doors when, & only when, it is safe to do so on the basis of expert medical advice. Lots to consider, but today we step up planning.”

There are concerns fans won't be allowed back into English stadiums until 2021, with a COVID-19 vaccine yet to be found. But officials are trying to ensure there will at least be matches.

“The clubs reconfirmed their commitment to finishing the 2019-20 season,” the Premier League said, “maintaining the integrity of the competition and welcomed the government’s support.”

Ahead of Friday's meeting, Brighton expressed opposition to not playing its remaining five home fixtures at its Amex Stadium as it sits two points above the relegation zone.

“Whatever ends up being the end to the season is going to be imperfect and for us that imperfection will almost certainly be playing behind closed doors," Brighton chief executive Paul Barber said. "What we don’t want is a further imperfection of having to play at a neutral venue.”

The 20 clubs in Serie A also held a video conference on Friday and they were said to be in agreement that the season should be completed if they can do so in accordance with government guidelines and by respecting health regulations and protocols.