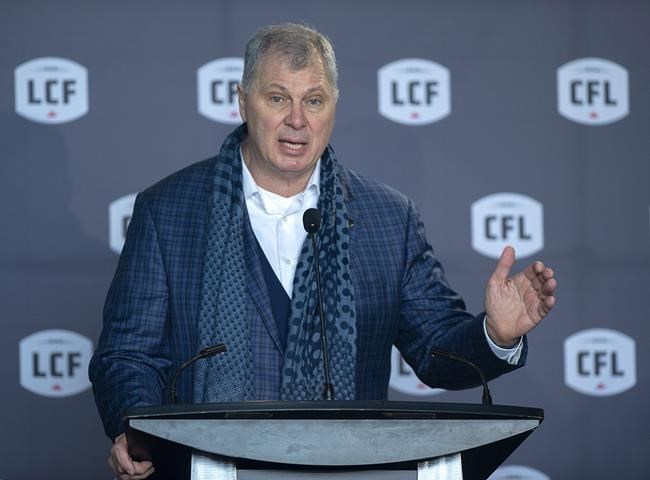 During his tenure as commissioner (1992-97) Smith headed up the CFL's U.S. expansion. From 1993-95, the league had franchises in seven American markets — Las Vegas, Sacramento, Memphis, Baltimore, Birmingham, Ala., Shreveport, La., and San Antonio _ and those expansion fees helped keep the league operating.

So what did Smith, now a Conservative senator, think when news broke last week that the CFL was asking the federal government for up to $150 million due to the COVID-19 pandemic?

"I was surprised and yet I wasn't," Smith said. "You have to understand one thing, a commissioner of the league is responsible to the owners and ensuring the continuity of the CFL.

"The commissioner is an officer but an officer who reports to the owners and governance of the CFL. If that's the way the league operates at this particular time, which I think it is, then the ownership leadership of the league probably has the final say in terms of how things are put forward. In fairness, you've probably got to cut (CFL commissioner Randy Ambrosie) some slack."

The CFL has been an important part of Smith's life. The 69-year-old Hudson, Que., native played nine seasons as a running back/receiver with the Montreal Alouettes after being taken first overall in the '72 draft out of Bishop's.

After overseeing the relocation of the Baltimore Stallions to Montreal as commissioner following the '95 season, Smith served two stints as the Alouettes president (1997-01, 2004-10).

He was instrumental in securing the Alouettes a foothold within the francophone community. Smith made over 200 appearances annually throughout Quebec promoting the Alouettes' brand as their top executive.

Smith understands how the novel coronavirus has impacted pro sports.

"I think we're all very hopeful this pandemic will end sooner than later," Smith said. "But there's tremendous pressure on all professional sports because if you can't get people to watch your product, it's very tough to have a legitimate business.

"Having said that, I guess the CFL braintrust has probably sat amongst itself and tried to figure out various strategies and I guess this is one strategy. Whether it's the right one or not, I guess we'll wait and see."

With many Canadians and businesses currently suffering, the optics of the CFL seeking such a hefty cheque from Ottawa aren't good. Not with the league's three community-owned franchises — Winnipeg, Edmonton and Saskatchewan — all reporting operating profits for the 2018 season and the remaining six clubs being owned by individual businessmen, corporations or ownership groups with deep pockets.

There's also the precedent Ottawa would set by giving big bucks to the CFL with other sports entities also suffering.

"I think the question is once a sports entity or operation asks for assistance then it opens the door for everyone else thinking the same way," Smith said. "I'm not going to criticize the CFL, obviously they're trying to find their way through it.

"Whether the proposal is the right (one) at this particular time . . . that's the No. 1 question."

But it's the CFL's current level of ownership that has Smith optimistic about its ability to weather this storm.

"Back in the days where I was involved, after a very successful period by Doug Mitchell as commissioner in the 1980s, the league ran into problems afterwards," Smith said. "And I inherited those problems during my term.

"But I'm happy to say that it's great to see such strong ownership in the league. However when you've strong owners and have resources, then greater demands are made of you publicly to support the community and your team. This is a very, very, very sensitive question to really address."

Last week, Toronto Mayor John Tory suggested the CFL should first look to its owners, clubs, fans and even the NFL before seeking federal assistance. Like Smith, Tory spoke from the perspective of experience, having served as league chairman from 1996-2000.

In 1996, the CFL didn't have enough money to pay Edmonton Eskimos and Toronto Argonauts players in the Grey Cup game in Hamilton. Fortunately, Tim Hortons provided the extra funds to ensure the players’ cheques would clear.

The CFL faced another financial crisis in 1997 but secured a much-needed US$3-million loan as part of a partnership with the NFL that was repaid with interest.

"I can understand John saying that, having worked with John and respecting everything he's done in his career," Smith said. "I guess the only caveat that I would've not necessarily included was going to the NFL because the NFL is a big, big player and not knowing what its secondary motives might've been.

"The first pillar that has to be understood by the public is we don't have 360 million people living in our country, we don't have the number of televisions and communication devices they have in the U.S. We don't have a competitive level of television and information that they have so as a result it puts more pressure on (CFL) teams having people in seats and having corporate sponsorship. It's a completely different economy of scale."

Smith has thought about whether the CFL could play games in empty stadiums. However, even with revenue from the league's television agreement, Smith said teams would still be faced with a huge financial hole to fill without being able to sell tickets.

The numbers appear to back Smith up.

In 2018, the Winnipeg Blue Bombers reported 36 per cent of their revenues came from games and another 15 per cent from concessions en route to reporting a $2.6-million operating profit that season. With no fans, the defending Grey Cup champions would have to find alternate sources to make up for a huge shortfall.

So what happens if the federal government turns the CFL down?

"Looking from the outside in, my guess would be the commissioner has been around the table, probably four or five times, developing different scenarios," Smith said. "I'd assume, and maybe again I should never assume, there's probably been some discussion at a high level about the various options.

"If you don't get Option 1, you have to look at Option 2 and Option 3. That would be my guess. We're all very hopeful the CFL will try to make some adjustments."

But Smith also worries about the long-term impact the novel coronavirus outbreak will have on all facets of the Canadian economy.

"The challenge is as we face a national crisis . . . how do you manage the finances of a country that will have an estimated $250-billion deficit," Smith said. "This could lead to our children and grandchildren having to pay off some massive debts over time, it could lead to tax increases.

"When you add this up and put in pro sports teams, people will be looking for those who have money in these particular areas to ante up to the table and figure out a way on their own for self-preservation because those who're stronger have a better chance at self preservation than those who're weaker."