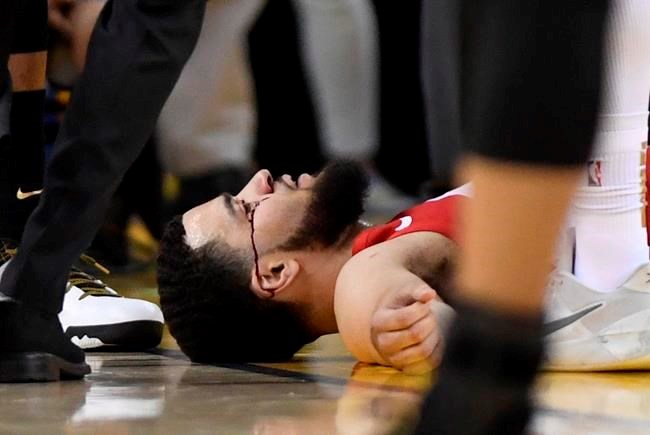 The Toronto Raptors beat the Golden State Warriors 105-92 on Friday night to take a 3-1 lead in the best-of-seven NBA Finals. Here are five memorable moments from Game 4:

After 11 horrific minutes on offence for the Raptors, Kawhi Leonard decided to take matters into his own hands.

With the Warriors threatening to go into the second quarter with a huge lead, Leonard hit a covered two and then drilled a running three in the final minute to cut the Warriors' lead to 23-17 (one Golden State basket was called back on a shot-clock violation after a video review).

Leonard made five of his eight shots in the first quarter for 14 points. The rest of the team was 1-for-13 from the field.

In a play that summed up the first half from an offensive perspective for the Raptors, Marc Gasol missed a wide-open three in the dying seconds.

That made Toronto 2-for-17 from three-point range in the first half for a pathetic 12.5 per-cent clip as the Raptors trailed 46-42 at the break. Just two days earlier, the Raptors hit 17 three-pointers to tie a record for a road team in the NBA Finals.

After hitting six three-pointers in Game 3 to break out of his slump, Danny Green was 0-for-5 from beyond the arc in the first half of Game 4.

Serge Ibaka has been an X-factor for the Raptors all playoffs — and he was at his best during Toronto's third-quarter run.

One sequence stood out. Ibaka blocked Alfonzo McKinnie's jumper, then raced to the other end and hit a three in transition off a pass from Kyle Lowry, giving Toronto a 64-61 lead.

While battling under the basket early in the fourth quarter, Raptors point guard Fred VanVleet took a hard elbow in the face from Shaun Livingston after a Toronto defensive foul.

VanVleet went down hard, lost a tooth and was bleeding badly under his eye. He was escorted to the training room by Raptors officials.

VanVleet got seven stitches and was cleared to return after going through concussion protocol.

The Raptors played smart, disciplined basketball while nursing the lead in the fourth quarter.

After Stephen Curry hit a three to cut the lead to eight with 2:56 left, the Raptors didn't panic.

Pascal Siakam hit two free throws after a bad foul by Draymond Green and then hit a 17-foot jumper on a pass from Green.

Lowry put the Raptors up 14 on a driving lay-up and it was all but over.

Canada's Shapovalov upset by Fucsovics in first round of Australian Open
Jan 19, 2020 11:39 PM