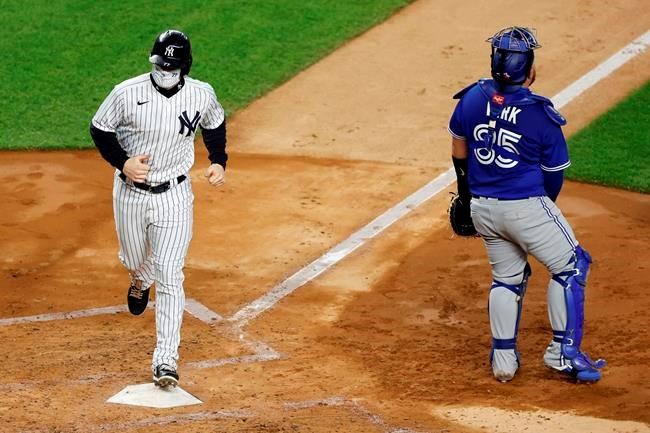 Blue Jays backup infielder Santiago Espinal could only offer a helpless smile as he watched DJ LeMahieu turn on his pitch and launch it over the Yankee Stadium wall.

Pressed into mound duty Tuesday to help preserve the Toronto bullpen, Espinal floated an offering at 48.7 miles per hour — about half the speed of a big-league fastball — and the New York slugger took advantage in a scene that looked more like batting practice than an actual game.

There was plenty of buildup ahead of the opener in the key three-game set between American League East division rivals. But by the end of the 20-6 rout, there was little for either team to gain with any buzz being replaced by the tedium of seeing a nine-inning game through to completion.

Calls for the mercy rule were a common sight on social media during the over three-hour affair and the subject was raised during team video calls with reporters ahead of Wednesday night's rematch.

"If the rules are the same for everybody, I'm good with them," said Blue Jays manager Charlie Montoyo. "But I know one thing, when I'm winning by a lot I don't want to see the other (team's) position player pitch ... it's uncomfortable. Nobody wants to hit against a position player but that's how it goes."

Major League Baseball made several significant rule changes for the 2020 season, which was shortened to 60 games from the usual 162 due to the COVID-19 pandemic.

A designated hitter is being used in National League games for the first time. Extra innings now begin with a runner on second base. A regional-based schedule was implemented to minimize travel. Doubleheader games were trimmed to seven innings.

And that's only a small sampling.

However, a mercy rule — ending a game when run differential hits a certain point after a minimum number of innings are played — was not included in the changes.

Use of the rule is common at the youth level and in international play. The World Baseball Classic used the mercy rule in the first two rounds of its last event in 2017.

At the WBC, a team was declared the winner if it led by 15 runs after five innings or 10 runs after seven frames.

Proponents feel the rule helps prevent injuries and stops teams from having to go through the motions by spreading backup players around and calling on position players to pitch.

Its use would also help time of play, long an issue for MLB, become more reasonable. Trimming innings would only help in the COVID-19 era and there are no paying customers in the stands to watch the action anyway.

Traditionalists, of course, may bristle at the suggestion of yet another change to a game that's steeped in history. A mercy rule would also snuff the faint hope of a comeback.

Yankees manager Aaron Boone said he's not all-in on a mercy rule, but feels it would eliminate the possibility of teams getting offended by players stealing bases or swinging for the fences late in lopsided games.

"There's probably some merit to it in a regular season," he said. "I'm not sure I'm totally sold on that but I get the merits of it."

Blowouts have been quite common of late around the major leagues. In the last week alone, the Atlanta Braves destroyed the Miami Marlins 29-9, the Milwaukee Brewers blanked the Detroit Tigers 19-0 and the New York Mets crushed Toronto 18-1.

"I guess it's up to Major League Baseball to think about that, to deal with that (mercy) rule, if they want to do it or not," Blue Jays first baseman Vladimir Guerrero, Jr., said via translator Hector Lebron. "But I don't mind at all. I'm just going to continue to go out there and do the best that I can for my team."

Espinal, normally a shortstop, made his first pitching appearance of the season in the blowout loss to the Mets. Like he did against the Yankees, Espinal allowed one earned run over one inning of work.

This report by The Canadian Press was first published Sept. 16, 2020.