Instead of playing rugby at home this weekend, Canada captain works out and waits 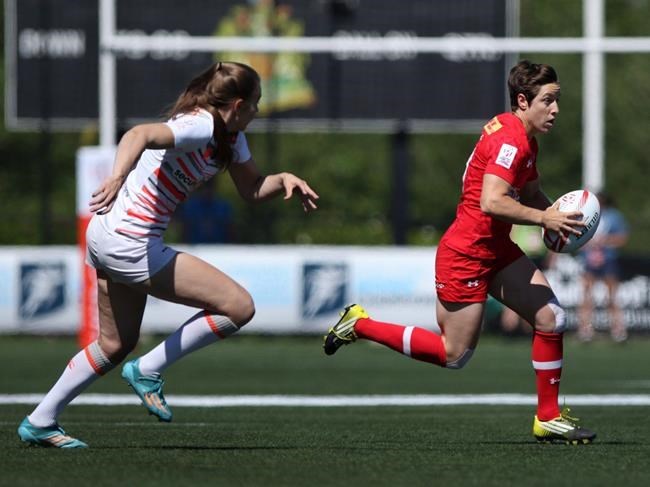 Ghislaine Landry was supposed to lead her country out on the field this weekend at the HSBC Canada Women's Sevens in Langford, B.C.

Instead the Canada captain is some 3,400 kilometres away, sharing workout videos and waiting for rugby to return.

The Canadian women had hoped to showcase their form at home before families and friends en route to the Olympics.

"That definitely was a big part of the disappointment. We had been playing the best rugby we've ever been playing," said Landry. "Our trajectory was going really well and I think the timing of a July 2020 Olympic Games would have been really good for us."

The Canadian women, bronze medallists four years ago at the Rio Games, were tied for second with Australia behind New Zealand in the HSBC World Rugby Sevens Series overall standings when the sport ground to a halt in March.

After a disappointing sixth-place performance in the season-opening event last October in Glendale, Colo., the Canadians reeled off four straight podium finishes. They were runners-up to New Zealand in Dubai, Hamilton, New Zealand, and Sydney, and finished third in Cape Town, South Africa.

Then the global pandemic derailed everything, including pushing back the Tokyo Olympics to 2021 — with the Canadian Olympic Committee leading the way to postpone the games.

"We all spoke the night that the decision came out," Landry recalled. "Even though we all knew that it was the right decision, it still hurt and a lot of us were pretty upset and sad that this had all happened.

"But like we've all said and we all know, there's so much more going on and this is all above sport and even the Olympics ... But it's still a hard pill to swallow and it changes a lot of for a lot of people. Another year of training for the Olympics is no small thing and it's not easy to wrap your head around."

Landry who turned 32 on Monday, knows all about making sacrifices.

Married to Toronto-area firefighter Michaela Hoskins in September 2018, Landry is away for long periods while training with the team. At least now, the two are together.

Landry returned home to Toronto immediately after news of the Olympic postponement.

"Our season was over and I wasn't sure if they were going to close flights down or anything so I wanted to get home for what I imagined to be a couple of months of time away from the team."

She hopes all of her teammates decide to keep going in the sport.

"Everyone's kind of finding their own path to make peace with it ... At the end of the day, if we're just talking about rugby, it's another year to keep pushing this team to get better," she said.

Still, Landry knows preparing for the Olympics takes a toll.

"The older girls, we know how to train. We can grind through it. The physical stuff is not really in question. But it's the mental and emotional side that's going to be the toughest. Our four-year quad(rennial) is long enough and now adding a fifth year, as an athlete that's done it twice now, it's really hard to wrap your head around."

With tournaments in Paris and Hong Kong also postponed, the Canadian women have no idea when they might play again. That's not easy for elite athletes whose daily training is normally tailored to peak at major events.

Instead, Landry has been working out at home in Toronto.

"You've got to keep your body ready. But ready for what, we're not sure," she said.

Landry also has to deal with the stress of a partner on the front-line.

"It's tough to know that any call that comes in could be putting her at risk or putting any of her co-workers at risk," she said. "They're prepared well and they've got all the PPE (personal protection equipment) and they're protected. But I'm sure you've seen in the news, there's a lot of cases going around fire halls and different departments.

"They're definitely at risk, but it's a job that needs to be done. I worry but I know that they're doing their best and we feel pretty confident that the Brampton Fire Department is doing their best to keep them safe as well."

Listed at five foot four and 143 pounds, Landry is no stranger to facing challenges, however.

Told she was too small to play international rugby at the senior level, she now stands as the all-time scoring leader on the women's sevens circuit with 1,356 points — 340 points ahead of No. 2 Tyla Nathan-Wong of New Zealand.

In 2017, Landry was one of three finalists for World Rugby women's sevens player of the year.

A star university player at St. Francis Xavier, Landry was essentially left out in the cold from 2007 to 2010 after playing two senior tours for Canada.

She kept playing rugby, rising to the challenge.

"When you have to work so hard and you're really tested. If you don't truly love it for what it is, then you're probably not going to continue. So I think part of what has made me the player that I am is that trying time and the times that I was told no and the decisions that I made to keep going despite that."

John Tait took over as coach, recognizing what Landry had to offer.

The Canada captain is skilled, unselfish and pacey. A cerebral player, she also makes the right decisions, according to Tait.

Landry has paid the price on the field. She tore her plantar fascia (a band of tissue that connects the heel bone to the toes) in the 2015 Pan-American Games final, sidelining her for eight months in the leadup to the 2016 Olympics, and suffered two disc injuries in her back before that.

But she has built up her body in the gym to help absorb the punishment on the field.

"Essentially our bodies are our armour," she explained.

And like her teammates, she does it for next to nothing in terms of compensation. A carded athlete, she also gets a top-up from Rugby Canada although that additional money may not carry forward past April.

"We're going to take a financial hit, which is tough because we're basically living on $20,000 a year," said Landry. "Our pay is less than what the government is offering as financial support to people who have lost their jobs (due to the pandemic).

"It's definitely financially tough times, for sure."