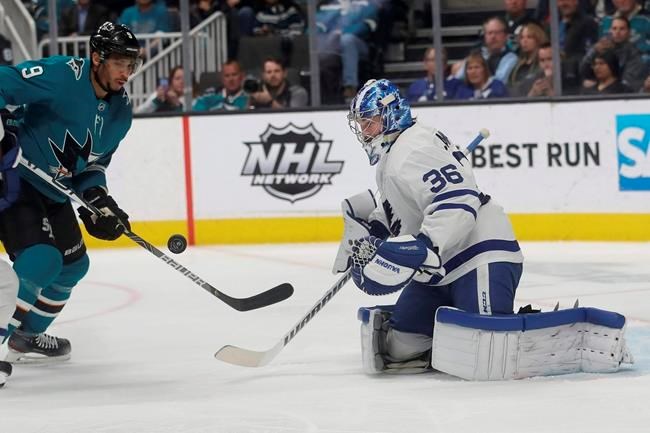 Jack Campbell has been diligently working out in Los Angeles during the NHL pause.

The Toronto Maple Leafs' goalie identified flexibility as an area of weakness to focus on without access ice or shooters, and he hopes to eventually come back a better version of himself thanks to a rigorous stretching regimen.

Campbell also recently experienced something different during the COVID-19 pandemic: FOMO — short for the phrase "fear of missing out" — after seeing a video of teammate Auston Matthews' Arizona residence.

The Leafs' star centre has been hunkered down with Toronto netminder Frederik Andersen and another friend for a portion of the pandemic. Matthews posted a short clip to social media this week of him completing an impressive alley-oop dunk off a pass from the roof of his sprawling house into a net attached to a sun-drenched, backyard pool.

"Oh man, of course," Campbell said on a conference call Thursday when asked if he did indeed have a case of FOMO. "I love those guys, they're awesome. We've been texting once a week or so, just staying in the loop. It looks like they're having a good time.

Acquired by Toronto from the Kings along with bruising winger Kyle Clifford in early February for forward Trevor Moore and two third-round draft picks — one of them conditional — Campbell immediately provided a calming influence behind Andersen after Michael Hutchinson was unable to get the job done.

In six appearances with the Leafs before the NHL suspended its season March 12 amid the widening novel coronavirus outbreak, the 11th selection in the 2010 draft by the Dallas Stars was 3-2-1 with a .915 save percentage and a 2.63 goals-against average.

He grew a moustache in support of Matthews' quest to become just the fourth player in franchise history to score 50 goals — and just the 13th NHLer in the salary cap era — dubbing his facial hair the "road to 50."

Matthews, who sits at 47 goals, was on pace to score a team-record 55 with 12 games remaining on the schedule.

"It's taking a little pause," Campbell said with a laugh of his tribute on Day 50 of the shutdown. "When the quarantine process started, the moustache was a little noticeable when I had to go get groceries in Toronto.

"I decided to let the beard go, but you can count on seeing 'road to 50' as soon as play resumes, no question about it."

The 28-year-old, who struggled to find traction early in his career before Dallas traded him to the Kings in 2016, has a month left on the lease at his place in L.A., so the pause has given him time to get ready for the move to his new home city.

"I've kept myself busy," Campbell said. "I feel really, really good about where I'm at physically and mentally.

"I'm not sure when we're going to start or whatnot ... I'm super excited just to get back and see everybody and get back to work and play the best game on Earth."