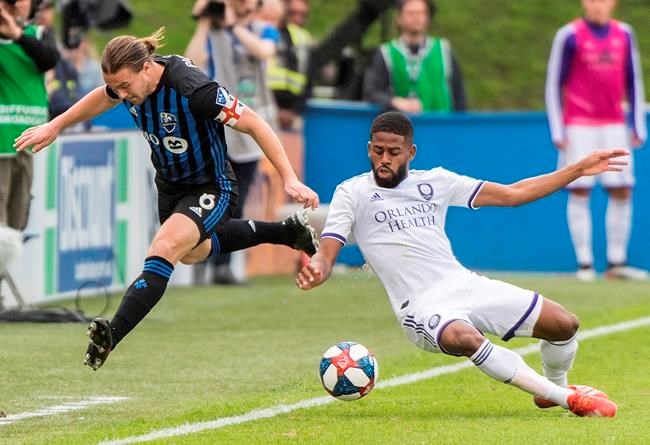 MONTREAL — Coach Remi Garde felt it was appropriate to apologize to Impact fans for Montreal's "embarrassing" performance against Orlando City SC on Saturday.

Orlando City scored three times in the first half to defeat the Impact 3-0 at Saputo Stadium, handing Montreal its third loss in five games.

It was the Impact's most lopsided defeat at home in nearly three years since a 4-1 loss to Orlando on Sept. 7, 2016.

"I'm embarrassed by what I saw today, especially in the first 45 minutes," said Garde. "I saw all the things I don't like on a soccer pitch, everything I don't like in life — selfishness, individualism, a lack of respect for teammates and fans. I'm sincerely sorry to the fans for those first 45 minutes.

Nani, Tesho Akindele and Will Johnson scored for Orlando City (5-7-3) in a 15-minute span in the first half. Evan Bush was beaten three times on five shots.

Zakaria Diallo's hand ball in the box off an Orlando corner led to a penalty kick for the visitors. Portuguese midfielder Nani slotted home from the spot in the 27th minute. Bush dove the right way but could not get his hand on the powerful shot. Nani leads Orlando with eight goals this season.

Akindele doubled Orlando City's lead in the 36th minute when he got on the end of Chris Mueller's low cross in the box for the easy tap-in.

"We conceded two quick bad goals back-to-back and that affected us too much mentally," said defender Dan Lovitz. "We're at home and no deficit should intimidate us. We could have been more positive and put that behind us to try to move forward and score goals."

The Lions made it 3-0 just before halftime through Jonhson's first of the season. Quick one-touch passes by Orlando created space down the wing for Joao Moutinho, who crossed the ball into the box. Bush punched the ball right to Johnson, who headed home for his first MLS goal since March 31, 2018.

Many of the 17,018 fans in attendance at Saputo Stadium booed after the final whistle.

"I don't have an excuse," said midfielder Samuel Piette. "We had absolutely no energy. We made a lot of mistakes, lost balls needlessly. That played on the team's morale. That first half was atrocious. It was embarrassing."

The Impact lost veteran right back Bacary Sagna, who left the game in the 36th minute with a twisted left ankle. Sagna hobbled around on crutches with his foot in a walking boot after the match.

Prior injuries to midfielders Ignacio Piatti (knee) and Harry Novillo (angina) forced Garde to play striker Maximiliano Urruti on the wing alongside Anthony Jackson-Hamel up front.

The move did not pay dividends as Montreal only managed one shot on goalkeeper Brian Rowe. Garde's men were blanked for the sixth time this season.

"When you play your striker on the wing because we're missing players in that position, that's not a good sign," said Piette. "Maxi is a great technical player, but it becomes complicated for a team when you put a player somewhere he's never played before. It's far from ideal."

Dom Dwyer (hamstring injury) did not travel to Montreal with his teammates but the offence managed without him.

"It feels really good," said Rowe, who recorded his third clean sheet of the season. "This was a game where we needed a result. Tonight everything came together and we got rewarded for all the work we've been putting in."

Notes: The Lions had only won once in their previous six games. … Orlando scored the game's first goal for the first time in six matches. … City improved to 2-3-2 on the road this year.