Race for championship round tightens at Tournament of Hearts 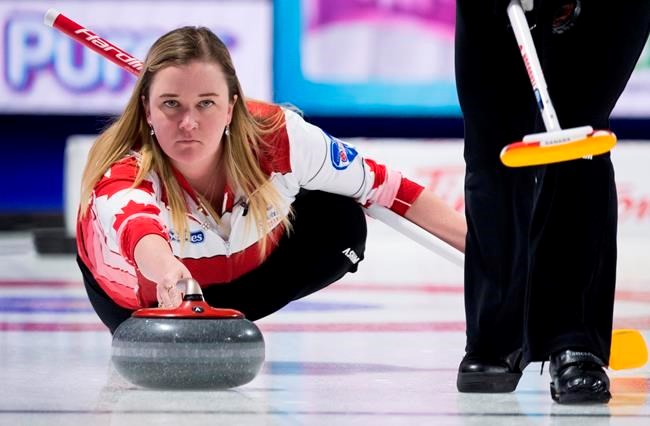 MOOSE JAW, Sask. — The "pool of death" defending champion Chelsea Carey predicted for the Scotties Tournament of Hearts is living up to its billing.

Carey's Team Canada, Manitoba, Saskatchewan, Northern Ontario and Alberta are all legitimate contenders to win the national women's championship, but only four will make it out of Pool A to the championship round.

Manitoba's Kerri Einarson earned her berth as did Ontario's Rachel Homan and the Jennifer Jones wild-card team out of Pool B with 5-1 records Tuesday.

The top four teams in each pool of eight at the conclusion of the preliminary round Wednesday night carry their records over to the championship round starting Thursday.

Ties for fourth will be settled by tiebreaker games, but a team's record must be over .500 to play in one.

Carey knew her pool was loaded with contenders — hence the "pool of death" label — but the battle to survive has surpassed even her expectations.

"That's exactly what I called it when I saw the pool," the Calgary skip observed. "It's hard to imagine one pool would feel as strong as this one did."

Einarson recovered from a 13-7 thumping at the hands of Crawford in the afternoon draw to beat Silvernagle 10-6 at night.

Crawford scored the first seven-point end in tournament history in the seventh end against Manitoba.

The Nunavut and New Brunswick upsets helped Carey, but the defending champ faces both teams Wednesday to conclude pool play.

"Nobody is a gimmee," Carey stated. "The rocks don't know who is throwing them."

Carey went 7-0 in her pool en route to the title last year in Sydney, N.S.

She kept her head above water in Moose Jaw with a vital 7-5 win over Alberta on Tuesday.

"It's as much to bring them back to us as much as anything else," Carey said. "You lose to them, it's a two-game swing. They stay at one loss and we go to three. The gap gets bigger."

The top four from the championship round advance to Saturday's Page playoff. The semifinal and final are Sunday.

Nunavut hasn't been an easy out forcing teams like Manitoba and Saskatchewan to go the distance to win.

"Looking at the field and looking at the pool, our goal was just to be competitive in these games and make the other teams really deserve the win over us," Eddy said. "This is a huge bonus to come out with a win."

Crawford, a former Canadian junior champion skipping New Brunswick an eighth time at Hearts, didn't know she'd scored a seven-ender until the rocks were counted up.

"It was kind of one of those ends that just kind of crept up," the 34-year-old said. "Definitely didn't see it coming until the end. I knew I was throwing for a lot but didn't know it was seven.

"Haven't had a seven-ender and if I have had an eight-ender, it's been a long time ago. Maybe in juniors."

This report by The Canadian Press was first published Feb. 18, 2020.