Rivalry Renewal: A look back at the last great Oakland-Toronto playoff series 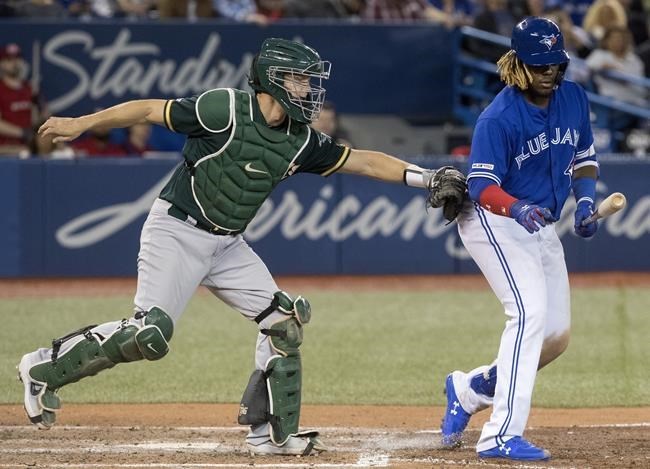 TORONTO — With one swing of the bat in a mid-October game in 1992, Roberto Alomar helped change the perception of the Toronto Blue Jays.

After years of playoff failure or late regular-season collapses, the Blue Jays had arrived and showed the juggernaut Oakland Athletics that they were the real deal.

Forget the Toronto 'Blow Jays' of yesteryear. The '92 crew would finally win the American League Championship Series and went on to defeat the Atlanta Braves for their first World Series title.

It has taken over a quarter-century for Toronto and Oakland to meet again in the playoffs. The Raptors have a 2-1 series lead in the NBA Finals entering Friday night's Game 4 at Golden State.

There are plenty of similarities between the '92 Blue Jays and the '19 Raptors.

Big off-season additions. Key mid-season trades. Nervous fanbases not used to playoff success. And a firm embrace from Canadians across the country.

"The guys came up big when they had to come up big and it got us over that hump," former team president Paul Beeston said of the '92 squad. "But it was constructed that way and that's what the ('19) Raptors were constructed for."

The Alomar blast — a two-run game-tying homer in the ninth inning of Game 4 — was a seismic moment. It helped spur the team to new heights and stoked the growing national fervour.

"We knew that we had to play almost perfect baseball to be able to beat them," Alomar said. "(The) Raptors, they're bringing back memories, with the Raptors (against) the Warriors. The Warriors are the team to beat and the Raptors are doing a good job."

In that memorable Game 4 at the Oakland-Alameda County Coliseum, the future Hall of Famer turned on a Dennis Eckersley pitch and raised his arms in the air as the ball sailed over the wall.

Toronto completed the 7-6 victory in 11 innings and went on to win the series in six games.

"I knew Dennis was lights out," Alomar said. "I just battled with him. I was not trying to hit a home run, I was trying just to make good contact."

The '92 Jays were stacked with Alomar, Joe Carter, Dave Winfield, John Olerud and others. The pitching staff was also loaded with names like Jack Morris, Juan Guzman, Duane Ward and Tom Henke.

Toronto had lost to Oakland in the 1989 ALCS, the second of three post-season appearances for the Blue Jays in a seven-year span.

The '19 Raptors, meanwhile, made big changes after they made another playoff exit in 2018, landing superstar Kawhi Leonard and regular starter Danny Green in a blockbuster trade with San Antonio.

When Toronto lost to Minnesota in the '91 playoffs, management added two key players for the '92 campaign via free agency. The Blue Jays signed Morris — fresh off a World Series title with the Twins — and Winfield.

"I remember going to spring training that year and there was just a whole new vibe that Jack and Dave had brought into the organization," Beeston said. "That was one of: 'We were in this thing to win.'

The Raptors made a key mid-season trade this year to land centre Marc Gasol, giving up a package of players that included Jonas Valanciunas. The Blue Jays were active at the '92 trade deadline, giving up future MVP Jeff Kent to land pitcher David Cone.

"We were really good when Winfield and Morris came on," said former Blue Jays infielder Pat Tabler. "I mean really good. The push to the middle of the table, like in poker where we're all-in, happened when David Cone came."

Toronto went on to win the AL East with a 96-66 record. The 96-66 Athletics, led by Rickey Henderson, Harold Baines and Mark McGwire, took the AL West.

"That rivalry was incredible because they were really good and everybody knew the post-season went through them," said former Blue Jays pitcher Pat Hentgen.

Tension was running high between the two teams. Eckersley fanned the flames in Game 4 when he pumped his fist and pointed at the Toronto dugout after striking out Ed Sprague in the eighth inning.

"The emotions got to us in the dugout also," Tabler said. "That goes both ways. If you show emotion to us, we're going to take that personally and we're going to get fired up and we all did.

"From the top to the bottom, from the coaches to the manager to everybody, was screaming at him. Like, 'OK you can't do that to us. We'll show you,' — kind of thing."

In the ninth, Devon White singled before Alomar belted a 2-2 pitch over the wall in right field.

"It was like our best player doing his thing at that time," Beeston said. "I won't compare him to Kawhi Leonard, but you know what, he did what was necessary whenever it was necessary."

Derek Bell led off the 11th inning with a walk and scored the winning run on a sacrifice fly from Pat Borders. Henke closed things out by getting McGwire to fly out.

Oakland rebounded with a 6-2 home win in Game 5. Toronto closed things out with a 9-2 rout in Game 6 at SkyDome.

"It was way bigger than anybody had ever anticipated it was going to be," Beeston said. "I mean you could feel it when you were walking down the street ... the players became temporarily Canadian. It's just the way that it is and you can feel it with the (Raptors) too. They're proud to represent the country."

The Blue Jays needed six games to get by the Atlanta Braves, clinching the Fall Classic on the road.

"A World Series for the country of Canada and Toronto," Alomar said. "It was something that never happened before. As a ballplayer, it was the greatest feeling you can imagine."

This is the last season that the Warriors will play at Oracle Arena in Oakland. Golden State will move back to San Francisco next season and play at the Chase Center.