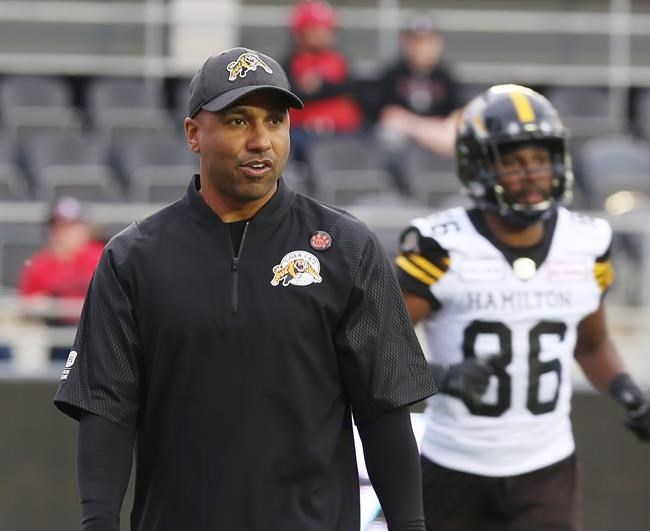 Instead, the Saskatchewan Roughriders' head coach is just looking forward to being able to make the calls he wants.

The Riders kick off the 2019 CFL season Thursday night in Hamilton, where Orlando Steinauer will also be making his head-coaching debut with the Tiger-Cats. Saskatchewan promoted Dickenson, the club's special-teams co-ordinator in 2018, to the head job after Chris Jones resigned as head coach/GM/defensive co-ordinator and vice-president of football operations to join the NFL’s Cleveland Browns as an assistant.

The Edmonton Eskimos will host the Montreal Alouettes on Friday night. The opening week of the regular season will conclude Saturday with the Ottawa Redblacks visiting the reigning champion Calgary Stampeders in a Grey Cup rematch and the B.C. Lions facing the Winnipeg Blue Bombers at BC Place.

"I know all the head coaches like to make it out like it's some big deal and there is all this pressure," Dickenson told reporters in Regina this week. "But you're still coaching and I think actually a lot of times as the head coach you've got some chains off of you because you get to look at the score, the situation.

"You don't have to think about what you're calling on offence or defence. I have to think about special teams but I really think it gives you a chance to observe the game, get a feel for the situation and really just coach that way. I don't think there's going to be a lot of a learning curve on that."

Buono retired as the B.C. Lions' head coach at the end of last year, culminating an illustrious 46-year tenure as a CFL player, coach and executive. Buono won seven Grey Cups (two as a player, record-tying five as a head coach), four coach-of-the-year honours, 13 West Division titles and the most games (282) in league history.

"I'm not going to catch him, I'm positive of that," Dickenson said.

Dickenson, 47, has spent 20-plus seasons in pro football as an assistant coach. So when he steps on to the turf at Tim Hortons Field, he won't have to worry about being over-ruled on the sidelines during a game.

"The main thing is I'll finally be able to call what I want to when I want to," he said. "Nobody is going to over-rule me on that.

"Other than that, I've got to figure out when to throw the challenge when we need it. But that's the nice thing about being the head coach, all those ideas and opinions you have, you get to now act on them and get to execute them."

"The reality is everything is kind of a work in progress the first four to six weeks of the year," he said. "You'll see high-level football on both sides but I think you'll see a little sloppiness just because there's a lot of new faces out there and they're still learning.

As for Steinauer, he's just ready to get going.

"I really just want to kick the ball off, just ready to go," he said. "I feel like our staff has done an outstanding job (and) I credit them for my feeling like this.

"I feel like we're prepared, ready to go and I feel like everybody has been talked to death. It's time to play the game. I'm feeling calm, comfortable, confident and excited to see what we have."

Quarterback Trevor Harris will lead the new-look Eskimos at Commonwealth Stadium. Harris threw for 5,116 yards and 22 TDs in leading Ottawa to a Grey Cup berth last year but went to the Eskimos as a free agent after Mike Reilly left for B.C. Also gone are receivers Duke Williams, Derel Walker and Bryant Mitchell after the squad missed the CFL playoffs last year for the first time since 2013. Khari Jones makes his CFL head-coaching debut for Montreal, which parted ways with Mike Sherman last weekend. The Als have missed the playoffs four straight seasons.

Claybrooks and Reilly highlight the list of new faces with the Lions. Claybrooks' defences in Calgary were the CFL's best while Reilly, 34, has led the CFL in passing the last two seasons. Expectations are high in Winnipeg as the Bombers won 10 regular-season games and their first playoff contest in seven years. Quarterback Matt Nichols and Canadian running back Andrew Harris are the offensive leaders while linebacker Adam Bighill, the CFL's top defensive player last year, anchors a unit that added defensive lineman Willie Jefferson and cornerback Winston Rose.