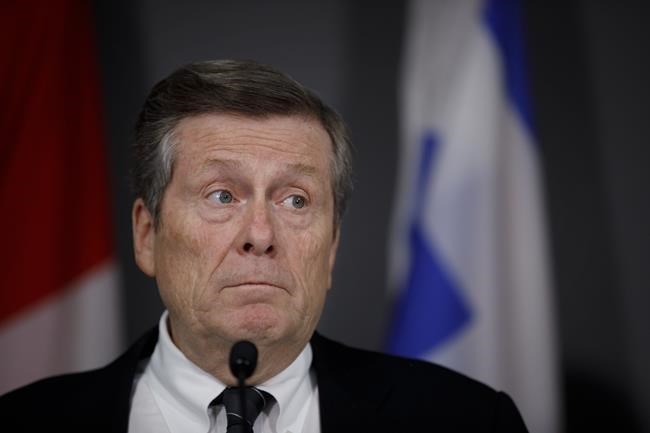 Toronto Mayor John Tory has been in a similar spot to where CFL commissioner Randy Ambrosie finds himself today.

And just like when he was board chairman during troubling times before the turn of the century, Tory believes the CFL can survive its latest crisis.

On Tuesday, Ambrosie divulged the CFL is asking the federal government for up to $150 million in federal assistance due to the COVID-19 pandemic. The proposal involves $30 million now to manage the current impact the novel coronavirus outbreak has had on league business, and up to another $120 million if the 2020 campaign is cancelled.

Ambrosie added the league's long-term future would be in peril if the season was wiped out.

Tory served as a volunteer chairman of the CFL's board of governors from 1996-2000. During his first season, the league did not have enough cash to pay Edmonton Eskimos and Toronto Argonauts players in the Grey Cup game in Hamilton.

Fortunately, Tim Hortons provided the league with extra funds to ensure the players' cheques would clear.

"I've seen it at that level of despair," Tory said. "We came back from that to the point where the league was very strong over the last number of years.

"It's just now this pandemic has (brought) many very well-run organizations to their knees and the CFL has the same kind of problems many other businesses in Canada have."

In 1997, the CFL faced another financial crisis that threatened its survival. But the league secured a much-needed US$3-million loan as part of a partnership with the NFL that it ultimately repaid, with interest.

From 1993 to '95, the CFL had teams in seven American markets — Las Vegas, Sacramento, Memphis, Baltimore, Birmingham, Ala., Shreveport, La., and San Antonio. The expansion fees paid by those clubs also helped keep the league afloat.

In 2003, the Toronto Argonauts and Hamilton Tiger-Cats met in the infamous Bankruptcy Bowl because neither franchise had an owner. The league did manage to secure new ownership for both clubs.

So Tory isn't surprised to hear the CFL is having problems once again.

"I remember, and I know even today with better TV contracts, the league is still very gate dependant," Tory said. "If there's a possibility or probability that fans in seats may not be possible at all this year or until much later, I'd understand that would cause serious financial problems.

"The fact they've turned to government, to me, would be part of what I think they should do."

But Tory said that's not all the CFL could be doing to help remedy the situation.

"To me, I think they should show a little, good old-fashioned CFL creativity," he said. "Turn to the TV networks and say, 'OK, what can you do,' because the TV networks are the beneficiary of having this great Canadian game that attracts a lot of interest around the country."

Then Tory would look to CFL owners.

"I'd say, 'OK, what can you do,' knowing some of them in places like Regina are community owners and they can't do as much," Tory said. "But there could be something, I think, the owners could do collectively."

"If you sort of do the math, I think I'm right in saying they'd have about 100,000 fans a week," he said. "Maybe you could have a bit of a campaign among the fans with each buying sort of a membership into the CFL."

With that all being done, Tory would then make the trek to Ottawa.

"With some degree of credibility, turn to the government," Tory said. "And say, 'OK, can you help,' in the context of this great Canadian institution that's been around for over 100 years and is a Canadian game played by many Canadian players in exclusively Canadian cities and is part of the fabric of the country.

"You might have something that would be a package that would tie the league through."

But he wouldn't stop there, either.

"I know I'm speaking controversial words here," he said. "But I've been through this many years ago in different circumstances.

Tory said when he joined the CFL, some advised him to pull the plug on the league.

"There were people who said to me, 'Maybe it would be easier just to fold sort of this thing up, declare bankruptcy and move on,'" he said. "I refused to give up and so did the governors of the day and the TV networks.

"We forged a partnership with the NFL helping out and we lived to fight many more days."

Tory said businesses can't be criticized for struggling during the novel coronavirus outbreak.

"I assess zero per cent blame on the owners, governors, management or commissioner of the CFL," he said. "There are many many other businesses out there today that have experienced exactly the same thing.

"And that's somehow the access to the business from the customers they relied upon, whether its through ticket sales or buying products or eating meals in a restaurant, that's been denied to them and they're in trouble because they have no revenue or very limited revenue coming in."

However, Tory is confident the CFL will overcome its latest issue.

"Everyone involved with the CFL has a passion for it because you wouldn't be doing it otherwise," he said. "I think you can get Canadian people to get behind something where there's been an effort made first not just to turn to government, that's always the easy thing to do.

"But rather to say, 'OK, we're going to fashion a plan here and we'd like government to be a part of it but we'll get everybody else on board first and then come to government later.'"

Note to readers: This is a corrected story. An earlier version had a wrong CFL job title for Tory.