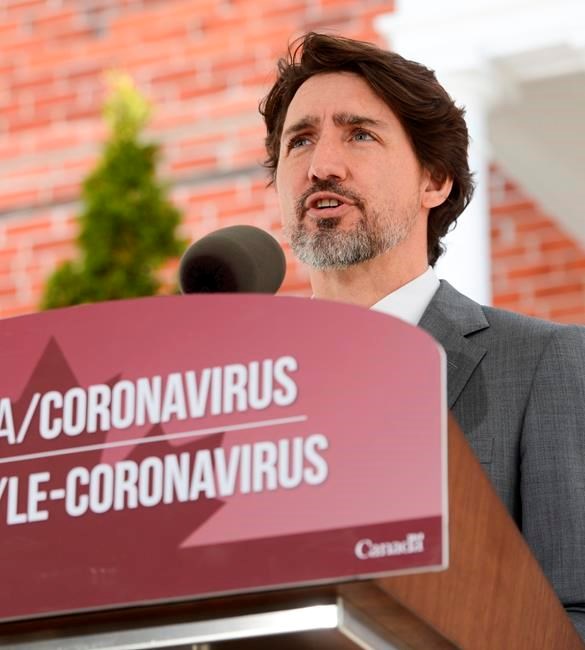 OTTAWA — Prime Minister Justin Trudeau says the federal government is in discussions with the CFL, which is seeking financial support to help with the impact of the COVID-19 pandemic.

Trudeau said Wednesday that support for the 62-year-old league is an "important issue" for the CFL and its fans.

"We are currently looking at how we can support various organizations. We recognize that this is an important issue for the league and for many Canadians and we are continuing our discussions with them," Trudeau said.

"The CFL has approached us about support. We know it's important to them and important for many Canadians and those discussions are ongoing."

The prime minister's comments come a day after The Canadian Press reported that the CFL is seeking up to $150 million in federal assistance.

League commissioner Randy Ambrosie said Tuesday the proposal involves $30 million now to manage the impact the novel coronavirus outbreak has had on league business, and up to another $120 million in the event of a lost 2020 campaign.

Ambrosie said the CFL's long-term future would be in peril if the season was wiped out.

The CFL is a significant part of Canada's sports history. It was founded in 1958 following the merger of two previous leagues, and its iconic Grey Cup championship trophy was first awarded in 1909.

This year's Grey Cup is scheduled for Nov. 22 in Regina. The CFL championship also involves a week of festivities in the host city.

The CFL hasn't given up on staging a 2020 season, but it has postponed the start of training camps, which were to open next month. It has also pushed back the beginning of the regular season — which was to begin June 11 — to July at the earliest.

Many provincial governments, however, have said there will be no sports events with large crowds this summer. That was reinforced by Dr. Theresa Tam, Canada's chief public health officer, in a Wednesday briefing.

"For the next while, I cannot see a single chief medical officer of health across this country who's going to say that these mass gatherings are going to be there," Tam said. "Of course we'll evaluate things as we're going along, month by month, but when we say we're easing into it, that's definitely not easing into it.

"So mass gatherings will not be part of our lives for a while."

Some sports have suggested the idea of resuming play without fans, but Ambrosie said that's a scenario that would be hard for the CFL to adopt because gate revenues are vitally important.

There has been no indication yet that the CFL or any of its member teams have reached out to provincial governments for help, but Alberta Premier Jason Kenney said Wednesday he would be willing to reach out to the Calgary Stampeders and Edmonton Eskimos, the two teams based in his province.

"I wasn't aware of their request but I'll take a look at that. I've not personally received any communications from the Stamps or the Eskimos but I'd be happy to reach put to them and see how they're coping through this, because obviously the season this year is going to be at least somewhat compromised."

B.C Premier John Horgan, an avowed sports fan, said he's open to the idea of subsidies for professional sports because of they provide a "tremendous economic stimulus," though he added he has yet to see any such proposals.

"There's positive consequences of having activity, there's negative activity of it stopping," Horgan said Wednesday. "We'll take a close look at everything that comes forward.

"I think people get jaded if they're not sports fans and they look at the salaries that many athletes get paid. I'll tell you that lacrosse players don't get paid that much, hockey players do and CFL players are somewhere in between. But they are workers, and they're affected by this adversely and we need to talk about that."

"There are other priorities that are certainly higher, but there is a negative economic consequence to not seeing our professional sports underway this summer," he added.