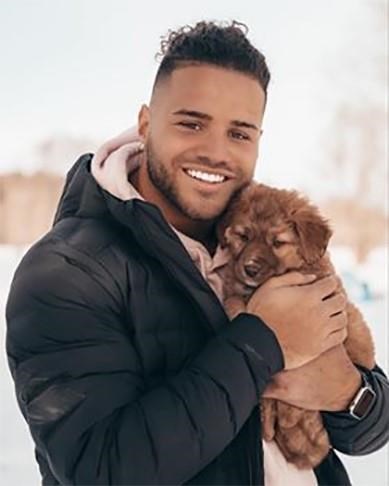 WINNIPEG — A quick reaction from a football player in the Canadian Football League may have saved a woman and her dog from a watery fate.

Running back Brady Oliveira from the Grey-Cup-champion Winnipeg Blue Bombers was walking his puppy on Tuesday when he saw the woman running after her dog along the Red River.

Oliveira told CTV News that the dog fell into the river and the woman slipped in as well as she tried to rescue her pet.

He said she was holding onto a little tree branch to avoid getting swept away further.

Oliveira says his "natural instincts" took over and he ran over to help.

The running back was able to get a hold of the woman, who was holding her dog by the collar, and they all managed to scramble back up the riverbank.

"It was definitely not the afternoon I was expecting, but I am so, so, so happy that I was there at that time," Oliveira said.

When they were back on dry land, the woman told Oliveira she recognized him — but not as a football player, even though he was wearing a Grey Cup championship hoodie.

She knew him from his work as a dog rescuer.

Oliveira said he works with an organization called K9 Advocates, which rescues dogs in communities across Manitoba. He said he has worked with the organization in the off-season to save about 50 dogs, including his own pup Nellie.

This report by The Canadian Press was first published May 13, 2020