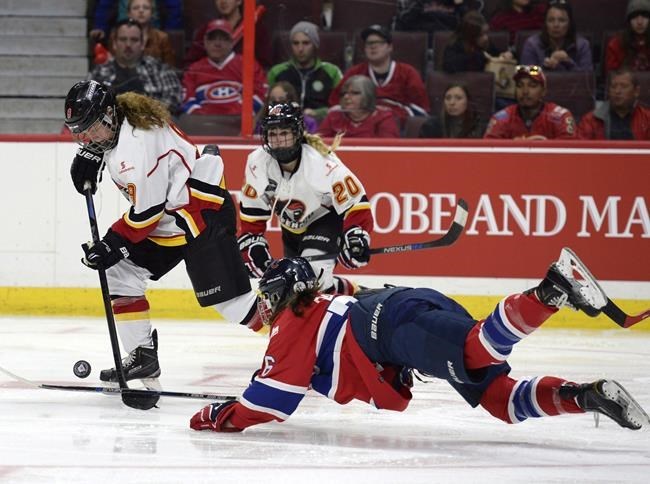 Female athletes, particularly hockey players, will be interested to see if the federal government provides pandemic bailout money to the Canadian Football League.

A men's professional league that pays an average salary of $80,000 asking for as much as $150 million in taxpayer money has those from the defunct Canadian Women's Hockey League contemplating the disparity.

A pandemic didn't shutter the CWHL last year, but the sheer size of CFL's financial ask is mindboggling to former goaltender Liz Knox.

"We're asking for peanuts compared to a $150-million ask," Knox told The Canadian Press on Thursday.

"When the CWHL was folding, we were talking in the hundreds of thousands (of dollars) to get us in the clear so the league didn't have to fold.

"We're talking two or three CFL salaries. That would made the difference of us literally surviving or not."

Former CWHL commissioner Jayna Hefford told The Canadian Press in an email "there were conversations" with the federal government about financial aid to save the league before it went under in the spring of 2019.

Commissioner Randy Ambrosie says the CFL's long-term future would be in peril if the 2020 season was wiped out by COVID-19.

After operating for one season, the men's pro soccer Canadian Premier League is asking the feds for $15 million in "short-term" financing to survive the pandemic.

The withdrawal of one of two Chinese teams, China wanting to renegotiate licensing fees, mediocre ticket sales and the lack of a broadcast presence all contributed to the CWHL's demise.

The CWHL's budget in its final season was $3.7 million.

"Women's sport is often seen as a charity, but certainly that's not the narrative that we're hearing about the CFL and their situation right now," she observed.

Hefford and Knox are now involved with the Professional Women's Hockey Players's Association (PWHPA) that rose from the CWHL's wreckage.

The union of roughly 200 players is working towards a financially sustainable league providing regular ice times and competitive supports for its players.

"The first thing that everybody within women's sport or non-CFL sport thinks is 'well, why not me? why not us?'" Small said.

"I think what the CFL is doing, they are a business going through a pandemic that has employees that are out of a job. I feel that is a very valid ask of its government."

If the football and soccer leagues receive financial aid from the feds, Small believes a women's pro hockey league should leverage that in the future.

"When we're back to normal, our memories will serve us well," she said.

Canadian speedskater Ivanie Blondin says she and a couple of her teammates were stunned by the CFL's request when they compared their own financial situations as amateur high-performance athletes.

"It was a little bit of a slap in the face when I saw this," Blondin said. "These athletes are paid way better than we ever will be in our careers."

Blondin raised $5,000 of her own money to compete in this year's world all-around championships and World Cup finale, so $150 million for the CFL startles her.

"That is a lot of money," Blondin said. "If our federation got a fraction of that, we'd be set."

The chief executive officer of Canadian Women and Sport is concerned the pandemic will widen gender gaps that already exist in sport.

"We really believe that the progress we've been seeing for women's sport could be in jeopardy if there isn't a real intention at this moment in time behind making the return to sport as inclusive as possible," Allison Sandmeyer-Graves said.

The chair of Egale-Action, Quebec's association for advancing women in sport, told The Canadian Press in an email it "would be improper (not to say indecent) to give money to the professional sport business."

"The day pro sports will support women sport, then maybe, giving them money during major crisis could be an option," Laval University professor Guylaine Demers wrote.