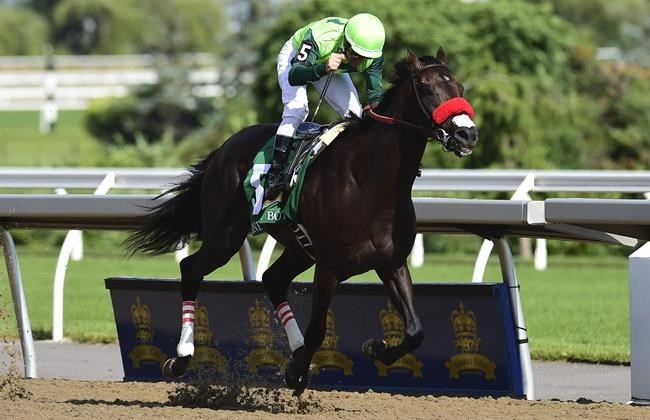 TORONTO — Jim Lawson is cautiously optimistic there could be live horse racing as early as next month.

Buoying the Woodbine Entertainment CEO's optimism is the Ontario government's gradual easing of COVID-19 restrictions Monday, allowing some mostly seasonal businesses to re-open. The novel coronavirus pandemic forced the suspension of harness racing at Woodbine Mohawk Park in March and postponement of the April 18 start of Woodbine Racetrack's thoroughbred campaign, and subsequently the $1-million Queen's Plate.

But Lawson sees the Ontario government's actions as a sign that racing could return in early June ahead of other sports entities because it could be done safely and without fans. While the pandemic forced all major sports to shut down, harness racing continued without spectators before being suspended.

"The big proviso is we don't want to get ahead of ourselves, governmental and health authorities because that's the wrong thing to do," Lawson said. "But I do think if restrictions are eased, we've shown and exhibited already we're capable of doing this.

"Not only did live racing occur at Mohawk without gatherings but with what we've achieved in our backstretch the last two months, we feel comfortable we can conduct safe racing. And when you combine safe racing with 15,000-20,000 people whose livelihoods really depend on this, we feel we're a good model to help kick-start the economy."

While no racing has occurred at Woodbine Racetrack, Woodbine Entertainment has continued operating its backstretch providing daily care for approximately 1,100 horses. Access has been limited to essential personnel — no jockeys, agents, trainers or media are allowed — and those individuals must strictly adhere to guidelines entirely consistent with those established by government and health agencies.

"We don't need stands and it's not like we have players rubbing against each other," Lawson said. "There's physical distancing by definition.

"We've had 1,100 horses on the track every morning for two months now and we haven't had any cases, knock on wood."

Some of the measures implemented by Woodbine include:

— Horsemen returning from the U.S. spending 14 days in self-quarantine.

— The presence of EMS personnel.

— The hiring of a physician from Etobicoke General Hospital as a consultant and member of Woodbine's COVID committee.

"We're taking this very seriously," Lawson said. "I think we've gone a great job and government is watching and has been complimentary with how we've handled this."

"They commented we were far ahead of many other businesses and we got a huge compliment on everything we've been doing," Lawson said. "We've had about 600 people (in backstretch) each day for over one month.

"I think one key factor is that in starting, the additional personnel required is minimal, including for example the potential use of remote judges . . . all we really need to do is bring jockeys on and we're already physically making construction changes to our jockeys' room like in/out doors and separate cubicles. On the standardbred side we're ordering trailers to have physical distancing amongst the drivers."

And Lawson said once thoroughbred racing is cleared to begin, the precautions wouldn't stop there.

"Among other safety protocols we have developed, we'd likely have our jockeys wear masks from the time they board the horse until they get to the starting gate," he said. "We'll only have two people allowed in the paddock per horse, a groom and a trainer, to help saddle the jockey up.

"There will be strict hygienic requirements in terms of washing and bleaching equipment while continuing to respect physical distancing. We're very confident based on the experience of other jurisdictions and our own experience so far in the backstretch that we can definitely do this."

Lawson added Woodbine continues to work closely with the Alcohol and Gaming Commission of Ontario to amend the rules of racing "to allow us to proceed."

"Things such as post parades and weights of jockeys," he said. "They've been co-operative and supportive which has been terrific."

On April 1, Woodbine Entertainment announced the Plate, scheduled for June 27, had been postponed due to the COVID-19 pandemic. While no firm rescheduled date has been established, Lawson is hopeful North America's longest continuously run stakes race could be held either in late August or sometime in September.

"We'll see what physical distancing guidelines are then," he said. "We may be able to permit a limited number of spectators in late August or more likely mid-September."

Also in question is when the $1-million Woodbine Mile turf event will be run. Lawson said Woodbine Entertainment has secured a deal with NBC Sports to broadcast the race, currently slated for Sept. 19.

This report by The Canadian Press was first published May 4 2020.