The FIRST Lego League competition was an action-packed day full of excitement and thrill.
0
Mar 15, 2020 11:00 AM By: Freelanced Submission 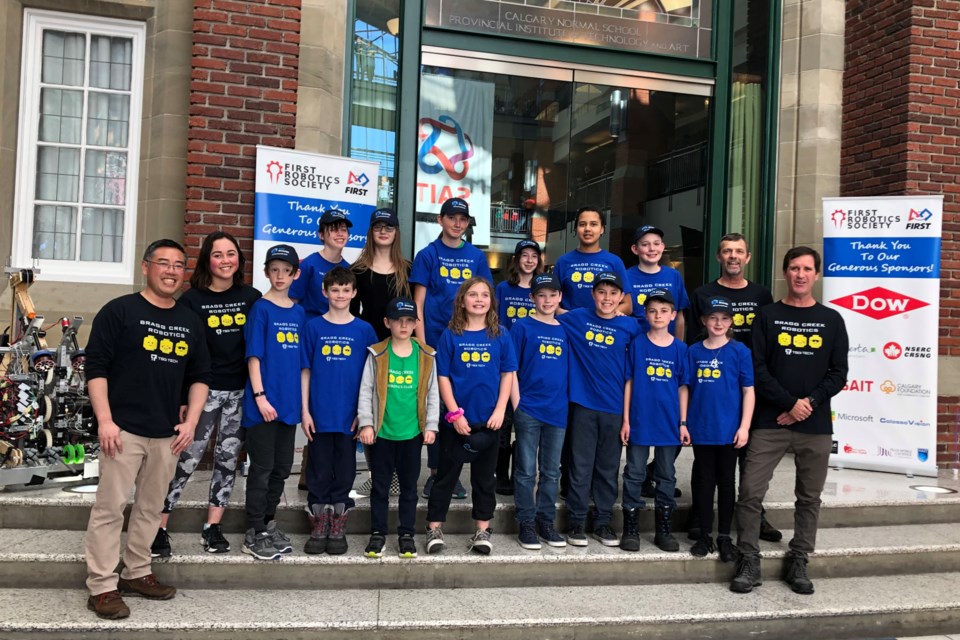 Bragg Creek Robotics team pose on the front step of Heritage Hall at the Southern Alberta Institute of Technology in Calgary. Submitted photo

By Ashlynn Tsoi
Special to the Cochrane Eagle

Bragg Creek Robotics entered two teams into this year's competition, one being ages nine to eleven and the other ages twelve to fourteen. The senior team placed 1st and the junior team placed 5th out of 46 teams in the City Shaper Challenge Field Game.

Many members of the senior team have been with the club since the first day LEGO robotics was introduced to our community, and have a great amount of wisdom surrounding beginner engineering, programming, teamwork, and leadership.

Others are new to the program and have shown amazing dedication and perseverance, as they have learned and applied knowledge on building and programming. Coaches Nick and Dave created an amazing environment for the team to grow and experiment with new ideas, and they challenged the team to think outside of the box. The innovation, creativity, and problem-solving skills in these individuals is outstanding and commendable. They never cease to impress with their ideas. The senior team has also played an important role in inspiring the junior group, through mentorship, and by setting an amazing example of idealistic teamwork.

This was the junior team’s first-ever competition. Many of them had never programmed a robot before and the extent of their knowledge on LEGO robotics was playing with LEGO.  Since September they have grown so much, they have experimented with different types of sensors, gears, design structures, and programming. Coaches Nick and Steve mentored this enthusiastic team and brought an immense amount of knowledge, expertise, and support to a team full of energy and amazing ideas.

The comradery between both teams despite the age difference is amazing. They were congratulating each other and supporting each other through every challenge and every triumph.

As a coach for one year and participant for four, I had the pleasure to be part of this journey, helping both teams fight through difficulties and come out stronger because of them. I witnessed and partook in the joy of small victories, and watched the confidence grow in specific individuals as they stepped out of their comfort zone to try new things.

The competition itself is for teams in all of Southern Alberta run by FIRST LEGO League. It is a full-day event focusing on a research project, core values, robot design, and a robot challenge mat.

The theme of the competition is based on a real-world problem or challenge that each team must research, and present a solution to. This is the project section. The team voted on a research topic that connected to this year's theme of ‘city shapers’. They decided to research a solution to the excessive time, cost, and waste in current home construction. The solution they came up with was modular homes.

The team researched the advantages, disadvantages, and constraints of modular homes. After finishing the research they created an interesting presentation to present to the judges on competition day. Public speaking was a daunting task for many of them, but they supported and encouraged each other to overcome this fear.

The core values section of the competition is a team-building challenge. This year it was a string lazer course, where one team member was blindfolded and the rest of the team had to verbally direct them through the obstacle. Our team had strong communication and stayed very positive!

On competition day there are eight challenge mats for all the teams to compete on. Each team has three rounds on the challenge mat throughout the afternoon. People gather around the Irene Louis Atrium to watch the competition. Dance music sets the mood and the commentator counts down the start of the race, three, two, one, LEGO, and they’re off!

Each team knows their plan and they whiz off into action lining the robot up pressing each program and changing the LEGO attachments. They work as fast as they can with as much accuracy as possible. Excitement fills the air, coaches, team members, friends, and family cheer the teams on. Suspense builds, as they never know if their program will run the same as it did in class and each mission completed deserves a victory dance. They thoroughly enjoyed the high energy and intensity of these competitions and took great pride in their accomplishments.

The FIRST Lego League competition was an action-packed day full of excitement and thrill. We were overjoyed to compete alongside 46 other teams in Southern Alberta at this event and loved meeting many like-minded peers.

The competition was an amazing experience but it is only one day, the best part is everything leading up to the competition. Each robotics class is an adventure, as the team gets to know each other and becomes an amazing group of friends, as they learn about a current real-world challenge and how to solve it, as they use their creativity to build with LEGO, and as they program the robots to complete challenges.  The team meets once a week and they don’t only make robots, they make memories.