Cochrane cafes are the most wonderful places to reminisce. Just the other day, for instance, longtime Edmonton reader John Chalmers joined me at Cochrane Coffee Traders.
Jul 22, 2021 9:30 AM By: Warren Harbeck 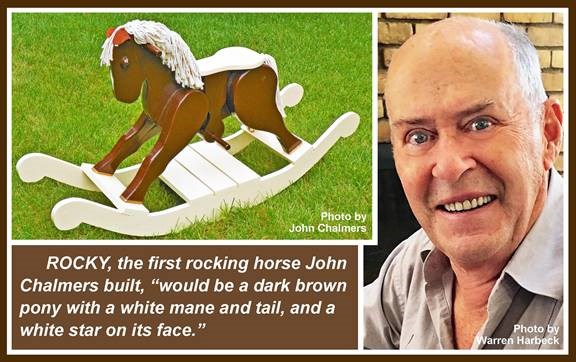 Cochrane cafes are the most wonderful places to reminisce. Just the other day, for instance, longtime Edmonton reader John Chalmers joined me at Cochrane Coffee Traders. The author/ historian reminisced over a poem he shared with us in our June 12, 2002 column. It was about how he transformed a scrap of wood into a trusty rocking horse to cheer his grandson. Well, to cheer you up on these smoky summer days, here are excerpts from Rocking Horse:

I HAD A PONY in my garage,

the head and body disguised in pieces of 2x10,

front legs in pieces of 2x6

and the rear legs hidden

in remnants of 2x8 boards in the wood pile.

With the help of the actual size U-Bild plan,

I began removing all the wood that didn’t look like a pony.

The crosscut saw and rip saw did the rough work,

as the limbs, body and head emerged from the lumber,

while a file and a sanding block further

shaped and refined the contours.

Critical holes were made with my new drill press,

precise cutting was performed by my backsaw,

and surgical precision in creating this wooden horseflesh

retained from my youth….

It began then, to my surprise, to take on character, and life –

Was that a heartbeat I felt beneath my hands as I shaped the wood?

A name was obvious, Rocky, the Rocking Horse,

This would be a dark brown pony

with a white mane and tail, and a white star on its face,

and Rocky would ride on golden horseshoes.

Did I just hear a small snort from flared nostrils?

Now, with a first coat of primer

in a steed whose mind now raced with anticipation

When stirrups and saddle were added, the wooden horse

whinnied with excitement as its painted brown hide was finished,

and it was nearly ready for riding.

Was that a twitch of its tail I just felt?

With eyes glued in place,

Rocky could now see a future with a small rider,

Rocky would be more daring than any horse in the Pony Express,

more courageous than any steed that led a cavalry charge,

stronger than any war horse

that ever carried a knight in armour,

more elegant than a jumper,

and faster than a thoroughbred racer….

SINCE FASHIONING Rocky over 19 years ago, John says, Rocky has been mounted by grandsons, nieces and nephews who have also enjoyed his rocking dragons, rocking goats, a rocking dinosaur and one rocking airplane.

Thank you, John, for sharing your rocking reminiscence with us.

Cochrane's Tasting Pleasures: In Defence of the Wrongly Accused— Sulfites
Jul 16, 2021 8:00 AM