These tears of humanity across religious lines relate to another conflict area: gender equality. Calgary’s Baitun Nur Mosque is hosting a Women’s Day symposium on The Empowerment of Women According to My Faith.
0
Mar 7, 2020 6:00 AM By: Freelanced Submission 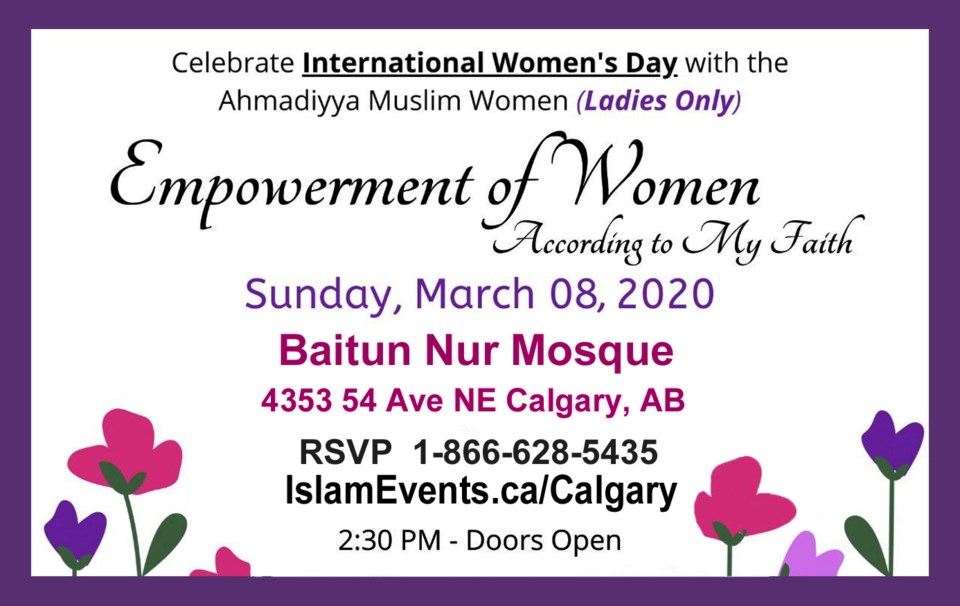 “My family lived in Sa’sa, Sfad, a small village in Northern Palestine/Israel. My family was forced out of our village in 1948 and lived in a Palestinian refugee camp in North Lebanon. My mother had lost my elder brother in 1934 and he was buried in the village cemetery.

“From 1948 to 1971, because of the Arab-Israeli conflict, my mother hadn’t seen her elder sister, who had decided to remain in Northern Palestine/Israel. But thanks to the family unification program of the International Red Cross, she was able to visit her beloved sister.

“My mother was also eager to visit my brother’s grave and pray for his soul. However, she found that the cemetery was destroyed and replaced by a public park. She went back to the location of our home, where there was an old tree.

“Having walked many times to my brother’s grave during 1934-1948, my mother counted her steps from the tree until she reached a spot in the park where she thought my brother was buried, sat down, and started crying. A settler woman who was sitting in the park was curious why my mother was crying. My aunt, who was with my mother, translated that my mother was crying at the spot where she believed her son’s grave was. The Jewish lady had lost a son during the ‘independence war.’ At this point, both women hugged each other and wept together – tears of humanity.”

These tears of humanity across religious lines relate to another conflict area: gender equality. Calgary’s Baitun Nur Mosque is hosting a Women’s Day symposium on The Empowerment of Women According to My Faith.

Amtul Qayyum Anjum, president of their women’s association, recalls an encounter she had about a year-and-a-half ago while shopping at Market Mall that mirrors her Ahmadiyya community’s motto, “Love for all, hatred for none.”

“I was wearing a long coat and a hijab,” she says, “and underneath I had on traditional Pakistani clothes (salwar kameez). Just as I was about to exit the mall, another woman was entering. She was not a Muslim, or South Asian. I didn’t know her; she didn’t know me. But as we passed each other, she said hello to me, and added, ‘You are looking so graceful in that scarf.’

“This exchange was so ordinary: one woman complimenting another on her outfit. Yet it was also extraordinary, because we came from different backgrounds and believed in different things. Moments like these, ordinary moments of people seeing people, and of women supporting women, remind me that we are all the same.

“At events like the Women’s Day Interfaith Symposium, we show that we may be different, but we agree more than we disagree,” Amtul Qayyum says. “In this women-only environment, we gather to support our fellow women in affirming that women should have a voice, and that as women we share a unique bond, regardless of our background or belief system.”

This Sunday afternoon’s “ladies only” seminar at the mosque (see attached invitation) will feature representatives from Christianity, Judaism, Hinduism, Indigenous Spirituality, and Islam, as well as tours, displays, free henna – and dinner, too!