It was nearly 50 years ago – Christmas holidays 1969, to be exact – when nine Stoney Nakoda young people from Morley climbed into my van and off we went on a visit to the spectacular canyon country of the U.S. Southwest.
May 24, 2019 11:00 AM By: Warren Harbeck 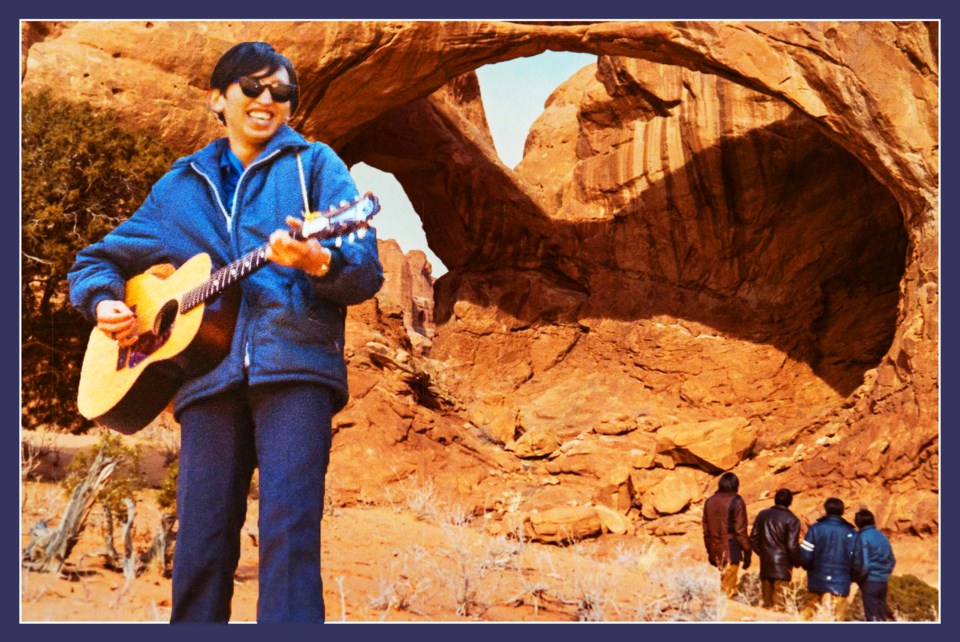 It was nearly 50 years ago – Christmas holidays 1969, to be exact – when nine Stoney Nakoda young people from Morley climbed into my van and off we went on a visit to the spectacular canyon country of the U.S. Southwest. It also launched me on lifelong learning at the feet of one of those young people, Gerald Kaquitts.

Nineteen at the time, the son of the renowned artist and leader “Sitting Wind” (Frank Kaquitts) would soon be distinguishing himself as a community leader, too, as well as a fun-loving outdoorsman, golfer and historian specializing in treaty issues. He was also a great nature photographer!

Gerald passed away in 2007, but left me a legacy of wisdom on happiness that has very much shaped who I am today.

The other day while thumbing through my photo album of our canyon country trek, I came across that fun-filled moment when Gerald, standing in front of one of the iconic features of Arches National Monument in Utah, couldn’t help himself. He just had to take his guitar and sing one of his favourite County and Western numbers, to the delight of the rest of us.

From then on Gerald became my mentor in enjoying the journey of life.

One hot summer afternoon some years later, for example, while he and I were driving toward his home at the west end of Morley (near where scenes in the 2015 motion picture The Revenant were filmed), we came across a horse out in a field rolling around in the dust.

“Look how happy that horse is,” Gerald said. “It’s probably just returned from a long ride, had its saddle removed, and is enjoying the freedom of the moment.”
Happiness? Yes! But then there’s his lesson about gratitude nurtured in beauty, wisdom passed onto him by his parents and grandparents.

“To see the world every day for how beautiful it is, and to be thankful for it,” Gerald once told me. This was the way human beings could best enjoy nîbi ptenâ ne, “this short journey called life.”

“They saw the world for how beautiful it was,” he said, and instead of grumbling about the ugliness, they rejoiced in its beauty.

But rising above life’s uglier moments requires perspective, he explained to me on another occasion. And here he used a photo he had taken of a treacherous mudflat in the context of the wider view of beautiful mountains and river valley. This was about seeing life as a high-flying eagle sees it; it’s about keeping all of life in perspective.

Perspective, gratitude and happiness – three of the many valuable lessons I learned from Gerald. In tribute to my mentor, therefore, I’d like to close with words from Lobo’s popular love song from the 1970s – a song that became sort of the unofficial “national anthem” among many of the Stoney Nakoda gang I hung around with back then, including Gerald:

Stoney, happy all the time
Stoney, life is summertime
The joy you find in living every day
Stoney, how I love your
simple ways.

COFFEE WITH WARREN: Mission Mexico and the meritorious Father Fred MSM
Jul 9, 2020 8:00 AM