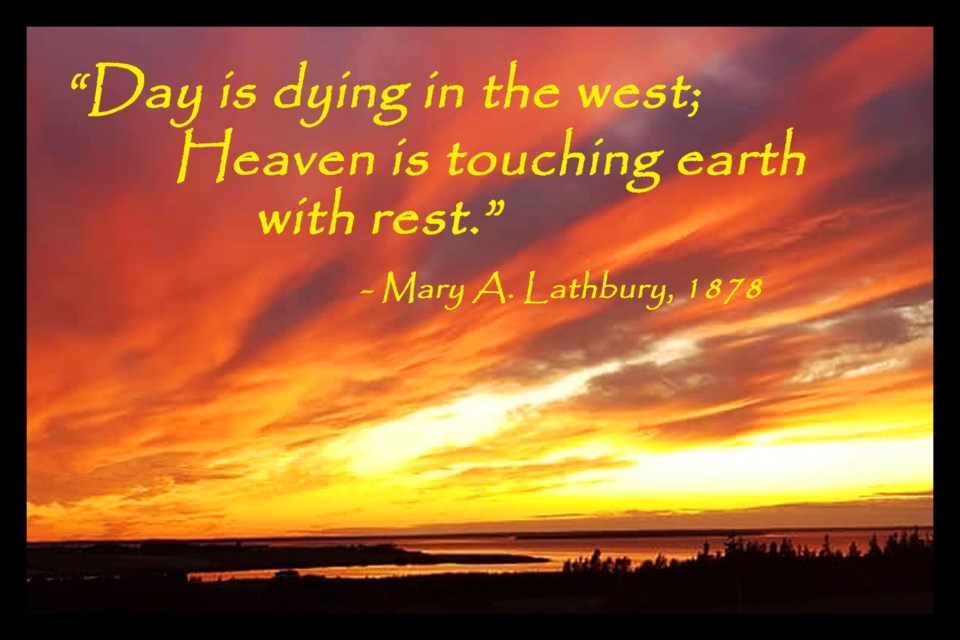 This past Sunday I received a welcome email from one of our longtime coffee companions that convinced me I had to write this week’s column on the Atlantic Provinces’ encounter with Hurricane Dorian.

Our neighbours, Cochrane author Pat Verge and her husband Harry, have been on a cross-country trip in their camper van. Their arrival in Halifax, N.S., just happened to coincide with Dorian’s. For Saturday night, Sept. 7, they chose to stay in a hotel.

“After last night’s heavy rains and howling winds, I can’t imagine how we would have survived camping with our canvas tent top popped up,” Pat wrote. One downtown Halifax construction crane wasn’t so fortunate, nor were many of the trees and powerlines. But Pat and Harry were safe, and they had heard of no injuries and deaths in their area – unlike Dorian’s deadly devastation in the Bahamas.

Well, this got me wondering how some of our other readers in the Atlantic Provinces fared.

David Forbes, formerly of Cochrane, was visiting cousins in Wallace, N.S., when Dorian struck. They hunkered down around games, conversation and laughter. “It was a comfort amid the howling wind and deluge of rain hitting the home,” he wrote. But people kept in touch by phone and social media. It was an inspiring example of “people caring about each other.”

From Charlottetown, P.E.I., Anne Tingley, formerly of Cochrane, wrote: “It was quite an evening and night! Lots of rain and high winds. We lost half a huge red maple in our backyard and the streets were littered with trees, branches and beautiful Hydrangea blossoms.”

Anne’s father-in-law, Rupert Tingley, wrote from Moncton, N.B.: “It was the strongest storm ever in this area but did surprisingly little damage” other than downed tree branches and loss of power.

And from Newfoundland and Labrador, Lorraine Folks, a frequent visitor to Cochrane, wrote that, although their area around Grand Falls-Windsor did have some rain and wind, it was nothing like Dorian’s impact further west. “The Great Northern Peninsula and the Straight of Belle Isle have been battered, affecting the coastal Labrador part of the province.”

Commenting on the relatively minor damage throughout the region, together with no injuries or loss of life, Pat Verge added: “It sure shows the power of unified action to respond to urgent matters and gives me hope that people will come together to tackle whatever humanity must face.”

I’ll give the last word – and prophetic photo – to Malpeque Bay, P.E.I., resident and former Cochrane live-theatre personality, Joan MacRae. Her area experienced 120 kph gusts damaging decks, outside staircases, and many trees. But thinking of the Bahamas, she said: “It’s hard to moan when others are so much worse off.”

Earlier last week she had taken a sunset photo from her deck. “It crossed my mind the irony of the beautiful, calm evening in front of me with Dorian bearing down on us in two days, yet it was its distant winds that helped create this scene!”

She allowed me to add words from an old familiar hymn to the photo and feature it here. Yes, Dorian’s day was just about done by the time it hit the Maritimes, and as soon as it had its last hurrah, heaven would be “touching earth with rest.”