COFFEE WITH WARREN: I’m better than you? No way!

This is the third in this year’s series of Lenten columns. The focus has been on having the mind of Christ as His followers (see Feb. 18 column on St.
Mar 4, 2021 7:59 AM By: Warren Harbeck 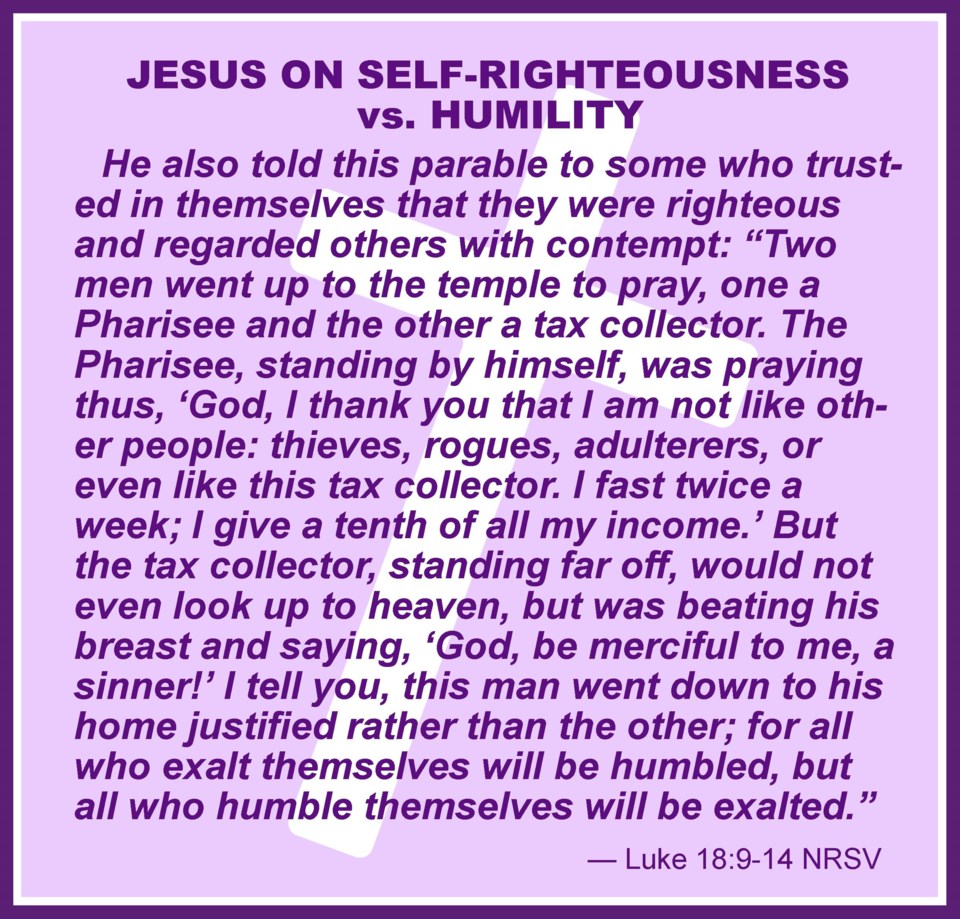 This is the third in this year’s series of Lenten columns. The focus has been on having the mind of Christ as His followers (see Feb. 18 column on St. Paul’s Letter to the Philippians 2:3-9), expressed in such ways as forgiveness (see Feb. 25 column). This week’s emphasis is on humility, a principle in our relationship with each other that has no room for any “I’m-better-than-you” attitude, whether by wealth, ancestry, social status, education, or any other criteria – not even religiosity!

Not even religiosity? So said Jesus! Consider His parable of the Pharisee and the tax collector in Luke 18:9-14 (attached).

The self-righteous religious zealot strutted into the temple to pray, and noticing a socially despised tax collector also at prayer, boasts: “God, I thank you that I am not like other people, thieves, rogues, adulterers, or even like this tax collector,” and then brags about a few of his religious practices. But the tax collector, standing off to the side, prayed with deep humility, “God, be merciful to me, a sinner.”

As Jesus warned elsewhere, “Beware of practicing your piety before others in order to be seen by them” (Matthew 6:1).

Likewise, self-importance and a busy schedule are no excuse to ignore the less fortunate along life’s highways and byways, as Jesus illustrates in the Parable of the Good Samaritan (Luke 10:25-37).

Consider Jesus’ own example. Here was the one of heavenly status, proclaimed by His followers as the long-awaited Messiah, King of Kings, who was born, not in royal quarters, but in a stable, and who travelled by foot or on a donkey rather than in a royal chariot.

Repeatedly, when He’d performed miracles of healing, Jesus didn’t pound His chest and boast, “Look at me!” but often told those He healed to go away quietly and not to draw attention to their healer.

The Apostle Paul’s message to the Philippian congregation plagued by an “I’m-better-than-you” attitude, wasn’t mere rhetoric. It was his own life example. St. Paul himself in his pre-conversion days had been a high-ranking leader of his people, “as to zeal, a persecutor of the church; as to righteousness under the law, blameless.” But he came to regard all that status “as rubbish, in order that I may gain Christ, and be found in him, not having a righteousness of my own that comes from the law, but one that comes through faith in Christ.” (Philippians 3:4-9)

For the wellbeing of community today, I urge you to join me in contemplating anew our own call to humility during this Lenten season.

EDITORIAL: Public health care measures should be left in the hands of medical experts
Apr 15, 2021 10:00 AM