Many years ago, an Indigenous Elder opened the eyes of Cochrane-based wildfire specialist Rick Arthur to “the relationship of humanity, fire, and the management of our ecosystems.
Jul 8, 2021 8:00 AM By: Warren Harbeck 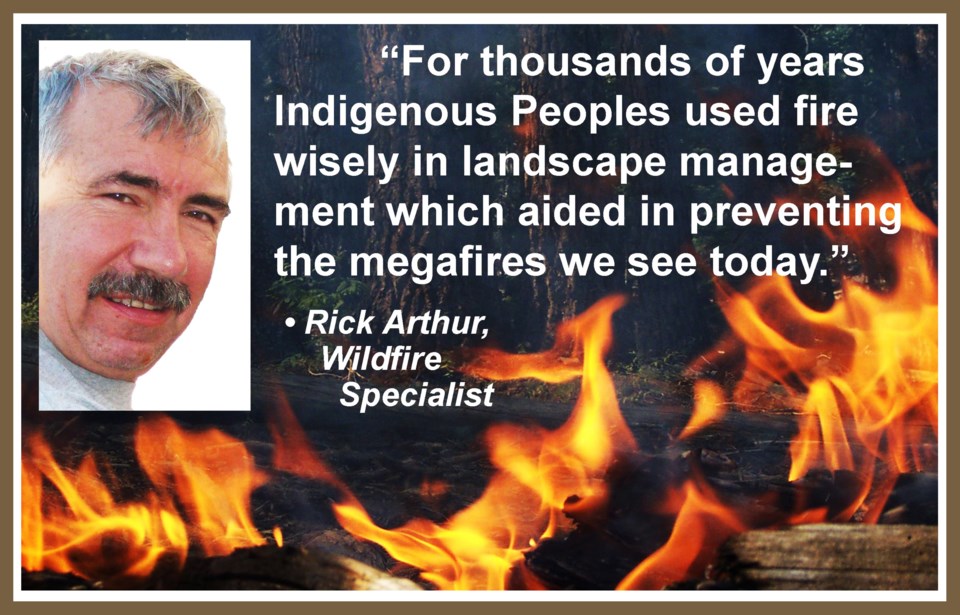 Many years ago, an Indigenous Elder opened the eyes of Cochrane-based wildfire specialist Rick Arthur to “the relationship of humanity, fire, and the management of our ecosystems.” In view of the current horrific wildfire situation here in the West, underscored by the burning down of the entire town of Lytton, BC, I’ve asked Rick to share with us some of the Indigenous fire-management wisdom he’s learned over the years.

“For thousands of years Indigenous Peoples used fire wisely in landscape management which aided in preventing the megafires we see today,” Rick says.

Our modern forest and park management policies changed the way forests had been managed. This has resulted in a dramatic increase in forest fuel loads which, when coupled with hot, dry weather, results in these extreme fire events. But “is climate the only issue?” Rick asks. “No!”

There is such a thing as “using fire intentionally,” he says. And this is where Indigenous tradition used low-intensity fires to keep landscapes open, to the benefit of the many species of the forest who got used to low-intensity fires, and to avoid the devastation of the megafires we’re experiencing now.

“Fuels can be managed – and were managed historically by Indigenous Peoples. They burnt frequently to maintain habitat and ensure biodiversity. This kept travel corridors open and maintained healthy forest ecosystems, so that there was not a continuous heavy fuel load.”

Which brings me back to Rick’s eye-opening encounter with the Elder all those years ago. Rick says:

IT WAS EARLY in my career as a young Ranger with the Alberta Forest Service, when I was assigned as a FireBoss on a fire in Northern Alberta. The fire was a few hundred acres in size and had been pretty active. We were starting to get a line around it and slowed the fire spread.

In the camp where I was staying, the cook’s helper was an old trapper, an Indigenous Elder, quite arthritic with a stiff limp to his gait. He did not speak English that well, nor could he read or write. But during the evenings, when the crew would gather around the campfire, sipping tea or coffee and chatting quietly, he would share stories with the other Elders, mostly in their language which I did not understand.

One day when I came into camp, he sidled up to me, tugged on my sleeve and pointed over to a patch of blown down trees near the camp. It was a mass of mostly dead and broken trees, falling on each other and so tangled that you could not pass through it. The crew had been cutting firewood out of it for camp use. He nodded towards it and in broken English said, “That needs a good fire.” I nodded towards the fire we were working on and said, “That’s a pretty good fire over there.” He shook his head and said “No, that’s bad fire; this needs good fire.”

It took me a number of years before I began to understood what he was talking about. He was trying to tell me that, traditionally, he would have burnt it in early spring, as the snows receded and the fire danger was low, with the intent of renewing the vegetation and removing the fuel build up. Once I started to grasp the lesson he was trying to teach me, it opened my eyes to the relationship of humanity, fire, and the management of our ecosystems.

THANKS, Rick, for listening to the Elder and sharing his wisdom.