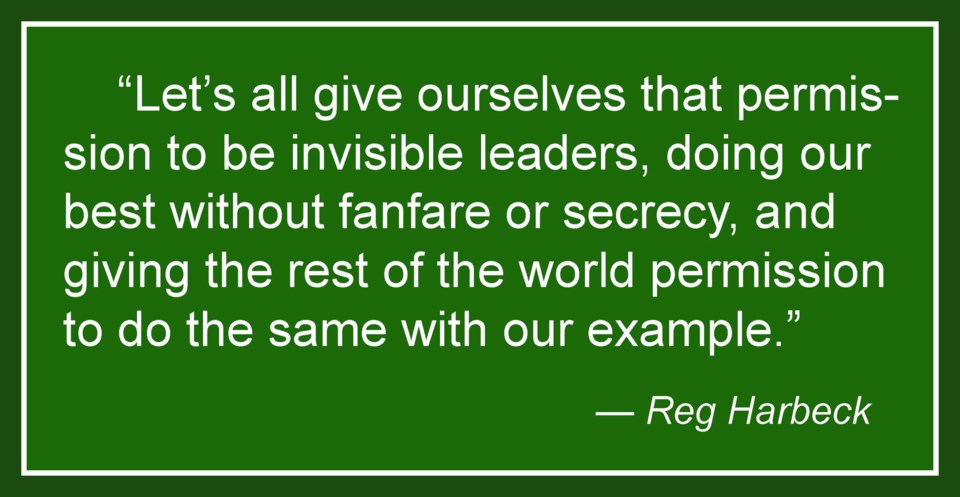 This past weekend during our weekly phone chat with our Langley, BC, son Reg, I happened to mention a leadership value that Stoney Nakoda First Nations Elder Tina Poucette emphasizes: that true leadership is committed to personal excellence, not out of ego and self-interest, but in order to bring out the best in others.

Reg Harbeck, an Information Technology consultant and frequent contributor to these columns, absolutely agrees. He even put some of his thoughts into an email for me to share with you this week.

“But when great rulers lead, the people are hardly aware of their existence.… The people think they are ruling themselves.” – Lao Tzu

Great wisdom never goes out of style, as this example from China in the fourth century BC illustrates.

This doesn’t mean people aren’t constantly trying to find an easier way. Wisdom has generally been more of an exception than a rule throughout history, but the example it sets has survived long after the pretenders to leadership in each generation have passed away.

The funny thing is, from a perspective of effort and results, there is no better way than that of wisdom. Everything else turns out to be a short cut that goes through difficulty to an insufficient result.

One area of wisdom that has always fascinated me is that of leadership by example. So often, people mistake celebrities, politicians and bosses for being leaders. And yes, sometimes they can be. Lao Tzu hinted at this with the above epigram. But leadership is not inherent in any of those occupations, and in fact they can actually hinder the best leadership.

A better way, from what I’ve seen, is for each of us to own the fact that we are automatically leaders the moment we choose to stand up and be and do our best without fanfare, but without undue secrecy either. That’s because both of those approaches draw the wrong kind of attention – the former, that of spectators and opposition, the latter that of conspiracy theorists and detractors.

One of my inspirations in preferring this approach has often been misattributed to Nelson Mandela, probably because he manifested it so well with his own example. In fact, it comes from Marianne Williamson’s book, A Return to Love:

“Our deepest fear is not that we are inadequate. Our deepest fear is that we are powerful beyond measure. It is our light, not our darkness, that most frightens us. We ask ourselves, Who am I to be brilliant, gorgeous, talented, fabulous? Actually, who are you not to be? You are a child of God. Your playing small doesn’t serve the world. There’s nothing enlightened about shrinking so that other people won’t feel insecure around you. We are all meant to shine, as children do. We were born to make manifest the glory of God that is within us. It’s not just in some of us; it’s in everyone. And as we let our own light shine, we unconsciously give other people permission to do the same. As we’re liberated from our own fear, our presence automatically liberates others.”

The interesting thing about this approach is how ordinary it looks to casual observers. How could anything be more normal than being ourselves? And yet, when we insist on being our best selves, we open doors and lift ceilings, and give an example that it’s OK to be and do one’s best. So many people are just waiting for someone to give them that permission before doing likewise.

So, as we prepare our 2020 foresight, looking forward to the coming new year, let’s all give ourselves that permission to be invisible leaders, doing our best without fanfare or secrecy, and giving the rest of the world permission to do the same with our example.