A police officer snatches a woman to safety just as she attempts to leap to her death from a bridge rail. Another officer suddenly has an uneasy feeling about using his gun in a robbery in progress, stops mid-draw, and averts a nightmare.
0
Nov 7, 2019 12:00 PM By: Freelanced Submission 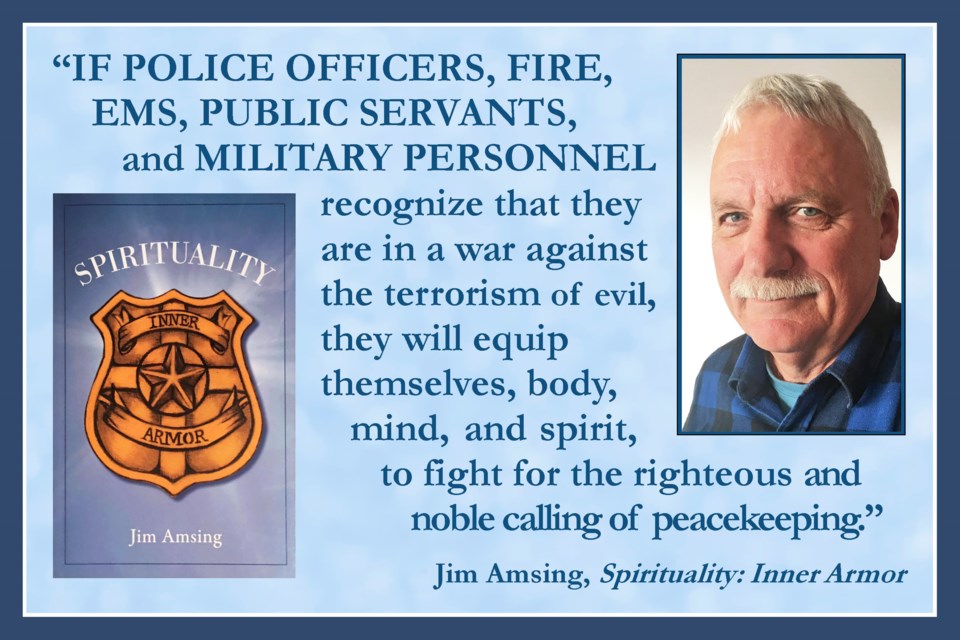 A police officer snatches a woman to safety just as she attempts to leap to her death from a bridge rail. Another officer suddenly has an uneasy feeling about using his gun in a robbery in progress, stops mid-draw, and averts a nightmare. Still another officer has to live with the reality that he did have to use his gun to save his own life when a gun-toting thug yanks the officer’s car door open. And then there’s an officer with integrity betrayed by a self-interested superior! All of them have to cope with the emotional impact of this toxic environment in which they work.

What to do about it?

Jim Amsing found the answer through following the advice of spiritual sages down through the ages: pursuing the wisdom I often refer to as “the listening heart,” or as Jim refers to it in the title of his recently published book, Spirituality: Inner Armor.

The former Cochrane resident has over 25 years of experience in law enforcement, including as a police chaplain and co-founder of Legacy Place Society (formerly known as Diakonos Peace Officer Retreat Society). He knows what he’s talking about.

“Peacemaking is a state of mind and of the heart,” he writes. “When you put on your outer armour for protection you shouldn’t forget that spirituality is a dynamic inner-armour that will protect your soul, guide you in peril, and allow you to live without fear.”

And yes, as members of the police profession know all too well, there are fearsome consequences to their work. Beyond the obvious life-threatening encounters they face on a daily basis, “the average age of death for a law-enforcement officer is ten to fifteen years earlier than the rest of the population,” he writes. “The divorce rate for police officers is twice that of non-law enforcement officers. The rate of substance abuse in the police culture is double that of the rest of society.” And yes, let’s not overlook post-traumatic stress disorder (PTSD).

It is against such noxious effects from the negative experiences and stresses of their profession that spirituality can provide the inner armour of protection, Jim writes, citing South Africa’s “wise and compassionate leader” Nelson Mandela as an example:

“Here was a man jailed for decades who could have succumbed to bitterness, hatred, cynicism, apathy, and despair, yet protected by his inner armour of spirituality emerged with hope, happiness, joy, forgiveness, and peace.”

This inner armour is available to all in stressful roles – not only police officers, but public servants of all kinds, including members of the military, especially to be remembered as we approach Nov. 11.

“The inner armour of spirituality infused with wisdom will allow the searcher to have calmness amidst the storms of life,” Jim writes. “This interior harmonic congruence will give tranquillity, joy, peace, and serenity, which will be actualized in the outer person in such a way that it will transform society.”