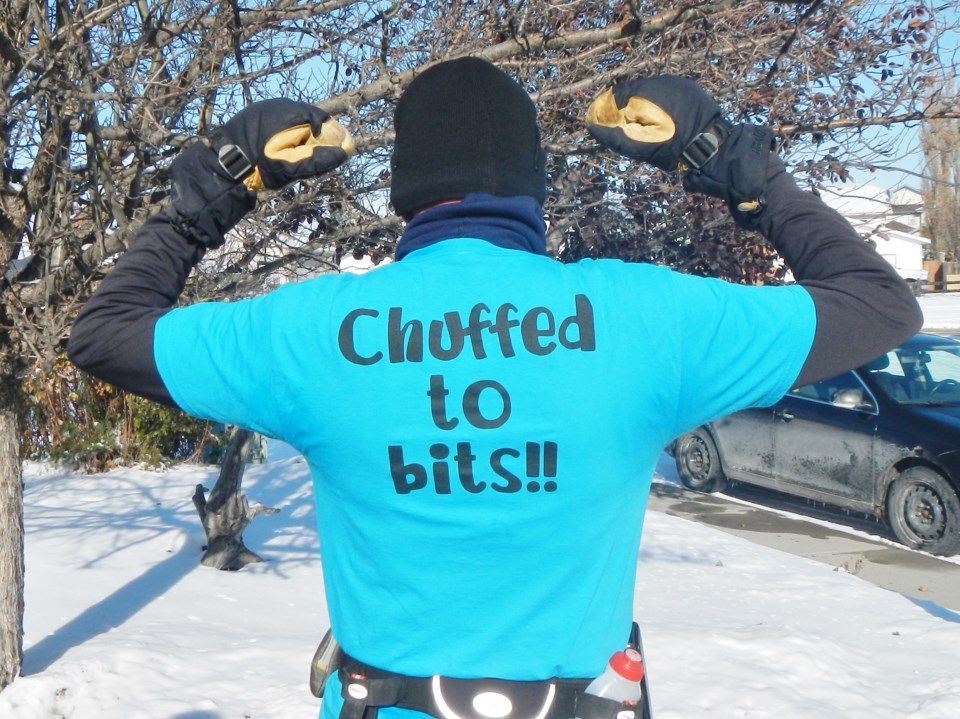 At 8 am on Sunday, Oct. 25th I was at the start line of the virtual New York marathon with running buddies Paul and Wayne and the temperature was -25C (-31C wind chill). In fact, this morning Cochrane, Alberta was colder than the North Pole!!!! I wore 5 layers on top, 3 layers below, smart wool socks, Salomon Gortex trail shoes, gloves, huge mitts, a beany hat, toque and a ski mask. The only area that was exposed to the elements were my eyes.

Thirty minutes into the run my water bottles were frozen solid. I ran with the New York Road Runners (NYRR) app and at every five kms I would hear a group of spectators cheering me on. The three amigos arrived at the half way point and Sue was waiting for us with coffee, chewy bars and bananas. The first half had been brutal and it took us 3:00:25.

The weather was improving and the temp had reached a barmy -12C (-15C wind chill). I removed one upper layer and one lower layer and switched my trail shoes for a pair of runners. Running buddy Wayne stayed with Sue and Paul and I headed off to tackle the second half. Things were going well until the 30km mark when my NYRR app died due to the cold and then at the 37km point running buddy Paul blew a knee. We walked it in for a 6:08:46 finish time and the final leg of the virual "Marathon Triple Crown" (Boston, London, New York) was completed. As one journey ends another one begins.

So it is with Tobias Weller’s next challenge. Tobias is 9 years old and has Cerebral Palsy and the super power of Autism. He has just achieved his goal of running / walking two marathons and raising £150,000. Now he is taking on another challenge.....to use his "Super Trike" to cycle a marathon. His fund raising page has just opened so let's give him a turbo start: bit.ly/2TrkfJ0